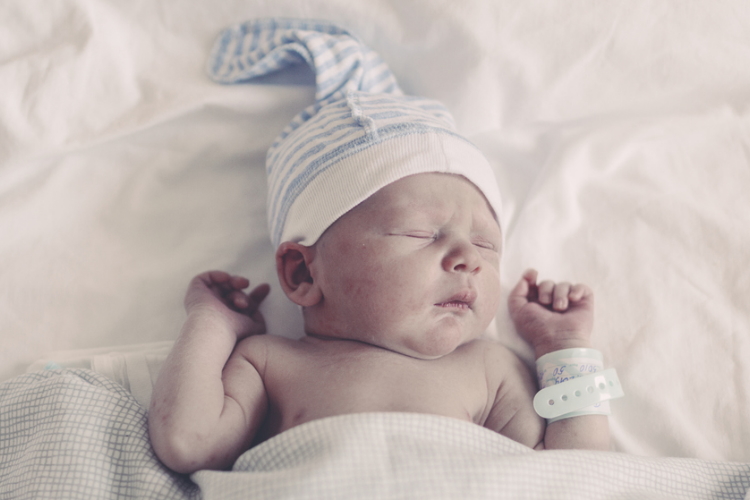 It's a parent's choice
by Liz Breslin

Twins. What an opportunity to have fun with names! We sent the grandparents- to-be a photo of my bump with arrows pointing to either side. The names read "Benson" and "Hedges". We were joking (although I've since heard there's a real live pair of Benson and Hedges somewhere out there). But we did have quite a few serious conversations over weeks and months about what to call them. After all, it's a parent's right and responsibility to name their kids as they like, such as calling them Luke and Leia. Now, aged seven and into Star Wars, Dylan is gutted that we didn't. But we played it safe, mainly because we were unsure who these wee people were and how to work out how to name them. And Thing One and Thing Two was just out of the question.

I really envy people with the certainty of what to name the child they've never met. Secure in themselves, their culture and their impending parenthood, they go forth and acclaim their unborn child by name. Of course, this can have outlandish results, but a name's just the tip of that particular iceberg. If you're a show-off, chances are you'll find a way to embarrass your children regardless of what you're allowed to name them.

And anyway, what kind of a world would it be if we had to stay in strictly defined parameters to name our kids? A Portuguese one, perhaps? There are more pages of banned names in Portugal than of acceptable ones - with names like Mona Lisa, Maradona and Lolita on the no-go list. This was revealed in a BBC study when the news swept around the world that a Kiwi couple had been stopped from calling their son 4Real. They settled on Superman instead.

But I mean, 4Real (sorry, couldn't resist it!), if people want to bully you, they will always find a reason, and a way, whether it's skin colour, name, size or dress sense. I have one of the most practical, conventional, flexible names in the English language. But being Liz, Lizzie, Beth, or Elizabeth ever-so-nerdily at school didn't protect me from name-calling by other kids. No. And the names they called me weren't strictly mine.

Some people choose their names according to religious protocols - Biblical names or those that honour the Prophet. Perhaps that's a welcome relief for some, when the other option is I'll-pick-a-name-of-someone-I-like-or-admire - which is why there's a generational pocket of Kylies and Jasons kicking around over the ditch. This is closely followed by choosing a name that isn't shared by anyone you dislike. Which can take months.

The most popular names in New Zealand over the past few years have consistently included Jack, James, Josh, Sophie, Olivia and Ella. But not in Hawea Flat. Here, you fit in if you are named after a tree, a colour, or a duck. Yep, I'm thinking about you, Teal Rata Wilkie. A beautiful name for a gorgeous boy. Names are of a time and a place and a collaboration of personalities; it's not up to anyone else to judge how we celebrate our children.

If it so happens that a name grows to cause offence or harm, there are legal channels to deal with this. Likewise, if parents are offensive and harmful to their children, there are also supposedly effective legal checks and stops in place. Calling your daughter Rihanna, Rhyannah, or Rianna doesn't necessarily mean she's going to grow up with bad taste in boyfriends. Regardless of how her kindy teachers might judge her for it. A lot of the so-called research in this area shows that people with challenging names ("ethnic", perhaps, or spelled unconventionally) are likely to do worse in life, but the correlation there can never be a simple case of cause and effect. Populations shift and change over time. Language itself is a fluid thing. And histories can be charted through given as well as family names.

Our family has a tradition of the oldest son calling their oldest son John, alternately as a first or middle name. Imaginative, I know.  But those who took the leap of imaginative faith and called their daughters "Carisbrook" (I've met at least two!) have commemorated histories in a different way. I wonder if Births, Deaths and Marriages would object to upcoming Dunedin babies being named after the new stadium's commercial identity, Forsyth Barr?

We attach a lot of importance to our given names in this country. More so than in many other cultures, whereby the family name is the crucial identifier. With the associated pressure to make our new lives stand out immediately as individuals, is it any wonder people go to extremes to express this? Relax! Your kids, given any name, with support and unconditional love, can be totally and utterly their darling selves. Even if you worry, as I did, over the edge of the cot, that maybe they look more of a Leia than a Lauren after all.

You get to give the name. And you get to keep on giving. Name them with love, honesty and imagination; it's just the beginning.

Naming our children is one of our first significant acts as parents. Names, after all, help shape our identity. Call your son Millhouse, by all means, but understand that you may be condemning him to a future of hanging out in chemistry labs and that he will never, ever be a male model or an All Black. Not strictly true, but our names do define us, whether they be the good old-fashioned Biblical kind or the outlandish-expression-of-parental-whim type. Certainly, the wrong name can be hurtful. Which is why, when it comes to naming our children, it shouldn't be "anything goes".

Take GoldenPalaceDotCom Silverman. In 2005, internet casino GoldenPalace.com paid a US couple more than $15,000 to name their child thus. A tidy sum, but worth it? Imagine little GoldenPalace explaining to her gal pals Sarah and Mary that her parents weren't trying to make her life hard, it's just that they couldn't pass up such a lucrative commercial opportunity.

Let's face it, sometimes governments need to protect children from poor parental decision-making. That's why we don't let individuals choose whether or not to use a baby car seat. If it weren't the law, some people wouldn't, even if it's obviously the right thing to do. It's also obvious that naming your son Adolf Hitler is going to cause him serious grief later  in life. Yet one couple in New Zealand applied to do just that (they didn't succeed).

For the record, the New Zealand Births, Deaths and Marriages Registration Act prevents parents from giving children names that might offend a reasonable person. Names rejected by the registrar include Yeah Detroit, Sex Fruit and Satan, but Number 16 Bus Shelter apparently got through. New Zealand is less strict than Germany, where you must be able to determine the gender of a person by his or her name, or Denmark, where parents select from a list of 7000 pre-approved monikers. We are tougher than America, though, where you can pretty much do what you want. Just ask GoldenPalaceDotCom.

There is evidence that our names do affect our futures. David Figlio, Professor of Human Development at Northwestern University, has found that girls with more feminine-sounding names are more likely to study the humanities, while girls with names that sound less feminine gravitate more often to maths and sciences. He also suggests that children with oddly-spelled names have a higher rate of spelling and reading difficulties.

Children's names certainly can reflect how their parents view the world, and this is not always a good thing. In Sweden, also well-known for its stern naming laws, a number of free-thinking Swedish parents have used naming their children as an opportunity to make a political statement. Elisabeth Hallin and Lasse Diding challenged the Swedish name rules by applying to name their son Brfxxccxxmnpcccclllmmnprxvclmnckssqlbb11116 (pronounced "Albin"). Officials rejected them, and they tried again, this time to register their child's name as "A". That one didn't get through either.

While there's probably a little bit in all of us that applauds the Hallin-Didings for challenging a law that favours micro-managing bureaucrats (only "some reason" has to be given for rejecting a name under Swedish rules), you've got to feel for wee Albin. Kids are mean enough to each other as it is, and the last thing a child needs is his or her parents handing bullies a ready-made opportunity for schoolyard abuse, even if the political cause is noble.

In a New Zealand case that made global headlines, a judge ordered the parents of a nine-year-old girl named 'Talula Does The Hula From Hawaii' to change her name. He pointed out that her name was a significant social handicap and that she felt ashamed to the point that she didn't tell her friends what she was really called. As one lawyer pointed out, her parents just didn't grasp how difficult a situation they had placed their child in - and so the courts intervened.

Of course, what is unusual has changed a lot over the years. Lately, it is almost odd to call your son something traditional like David or Tom. This may be due to the recent celebrity habit of trying to out-weird each other when naming their offspring. The tabloids went wild when Gwenyth Paltrow and Chris Martin dubbed their first daughter Apple, but those two have nothing on Jamie Oliver and wife Jools, parents to Poppy Honey, Daisy Boo, Petal Blossom Rainbow and Buddy Bear. Cute, but I can't help thinking that when Buddy Bear reaches high school, he might wish the government had set his parents straight from the start.

The danger is that children's names become nothing more than an expression of their parents' personalities. The question, then, is: Is your child's name yours, or is it theirs? And if it is theirs, it should be about them, not you. So go ahead, be quirky, make a political statement, have fun with spelling but don't use your kids to do it. Change your own name instead.