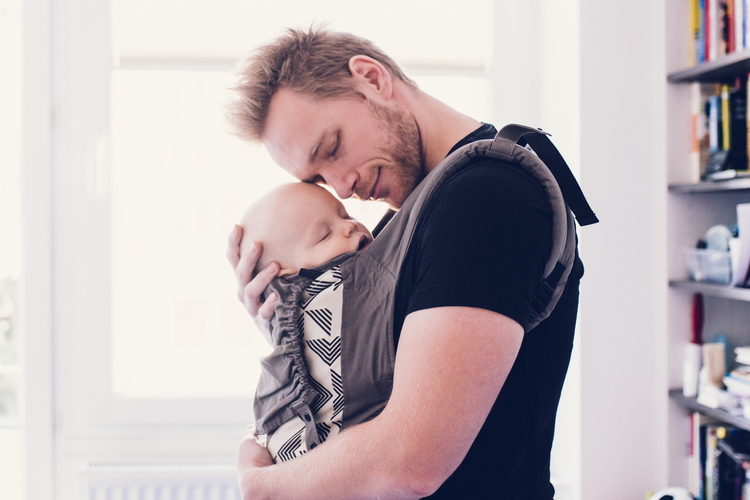 Babywearing:  It’s a convenient way to get from A to B and works wonders for growing brains, Sarah Tennant writes.

It is tempting to describe babywearing as “trendy”. Women buy designer wraps for upwards of $100 online, celebrities appear toting their offspring in Baby Björn packs. Carrying my baby around, I’ve had several older women say, “They didn’t have those back in my day!” And last year’s International Babywearing Week included, of all things, babywearing flashmobs.

You could chalk it up to a parenting fad, like gender-reveal parties and photographing babies in flowerpots, except that it’s been going on for thousands of years, in virtually every culture. All over the world, women have been blessed both with babies and lots of chores — and all over the world, they have tied their babies onto bodies and gotten on with it.

Around the world
The methods they used are wonderfully diverse and creative, reflecting the available materials and lifestyles of the cultures in question. Scottish women, surrounded by sheep and chilliness, used enormous woollen nursing shawls. Inuit women used the skins of seal and caribou. Native American mothers, who travelled often, popped their babies in cradle boards that could not only be carried, but hung conveniently on a wall or on the pommel of a horse’s saddle.

Some traditional babywearing methods appear cumbersome, to say the least, to Western eyes. The Ipili people of Papua New Guinea carry their babies in net bags hung from the mother’s forehead. And the traditional carrier of the Czech Republic is a large square basket lined with blankets, worn on the mother’s back.

Some baby carriers are intricate and detailed. Namibian back carriers are elaborate frame-type affairs with little padded seats. The ba’, a woven rattan back carrier from Borneo, takes three months to make and is decorated with coins, shells, glass beads, bronze bells, animal teeth and charms for the spiritual protection of the baby. Once the baby’s umbilical cord stump has fallen off, it is placed inside a shell and attached to the carrier.

But far more common are the soft, unstructured carriers that tie a baby to her mother’s back, chest or hip, forming a compact and somehow inconspicuous bundle that allows women to carry on with life.

In some cultures, babywearing is so seamlessly part of daily life that mothers don’t have specific carriers. Kenyan kangas and pagnes, Mexican rebozos and Mozambican capulanas are multi-purpose rectangles of cloth which, when not containing a baby, act as skirts, aprons, bags, mats, blankets and more.

And then, baby carriers can be incorporated into the mother’s clothing itself. Saris are easy enough to arrange so a baby can be tucked into a pouch at the back, as are Nigerian mud cloth wraps. Inuit mothers wear amauti, specially-designed padded jackets with built-in pouches at the back for the baby.

Benefits of babywearing
But in a society with prams, carseats, Jolly Jumpers, bouncinettes, exersaucers and other baby-containing devices, why wear a baby?

There’s the convenience factor, of course. Prams are a pain on buses and stairs, in crowded places and on hikes. And holding a baby “free hand” gets tiring quickly, not to mention rendering at least one arm unusable. Front-carrying is a great way to breastfeed conveniently, and invisibly, while on the move and a good front carrier is a marvellous disguise for a post-baby tummy too.

But the benefits to parents are slight compared with the benefits babies get from being constantly cuddled. To appreciate the awesomeness of babywearing, let’s start by looking at the phenomenon in its most-studied form: kangaroo care.

KMC (Kangaroo Maternal Care) was developed in an attempt to keep premature babies warm. Most premmies end up in incubators — those clear plastic fish-tank contraptions. Not surprisingly, most babies don’t like it and, despite the high-tech thermo-regulation, they don’t always stay warm.

In 1978, in an effort to stem Colombia’s staggering 70% mortality rate for premmies, Dr Edgar Rey started giving babies back to their mothers. The mothers wore the babies skin-to-skin, 24 hours a day, and the babies stayed warm. Not only that, they began to thrive.

And thanks to hefty doses of oxytocin released by the skin-to-skin contact, KMC mothers reported feeling more bonded to their babies, more confident about caregiving and less anxious.

Take comfort
While full-term babies are obviously less delicate than premmies, babywearing is still hugely beneficial. As with premmies, the easy access to the breast promotes frequent feeding, with the host of immunological and neurological benefits that provides. Upright carriers are a godsend for refluxy babies, allowing them to sleep without vomiting and pain. And babywearing helps prevent “flat head syndrome”, which can occur when a baby spends too much time lying supine in a cot, pram or carseat.

A study by Hunziker and Barr in 1986 showed babywearing, by promoting security and attachment, results in less fussy babies. Mothers were given soft carriers and instructed to carry babies for an extra three hours a day. The result: “At the time of peak crying (six weeks old), infants who received supplemental carrying cried 43% less overall and 51% less in the evening hours (4pm to midnight).”

Indeed, many mothers come to babywearing for precisely this reason — their baby is happy only when he’s being held. Hamilton mum of two Rosemary Roberts explains: “My second baby was born just 17 months after my first, and after a while it became clear he didn’t believe in sleeping alone. When rocking him in the pram stopped working I became a many-hour-a-day-babywearer. It was the only way I could get him to sleep. It could be done while looking after a toddler too and kept him happily in constant contact with me. It really helped us cope with his reflux too.

“But the day he finally let his dad take him for the occasional sleep my back was very happy!”

Thirty years ago, Rosemary might have been accused of setting up her son for a lifetime of dependence and insecurity: “Creating a rod for her own back,” as disapproving grandmothers say.

But recent research shows that securely attached infants are in fact more likely to be secure and independent in later life. Right now her son is learning that Mum is there whenever he needs her. Later, that will give him the confidence and security to explore the world on his own terms.

And babywearing doesn’t just make babies happier, it makes them smarter. Very small babies learn by touch. Though we don’t quite understand how, being exposed to small variations in balance, the movements and rhythms that come with being strapped to an adult, somehow helps babies’ brains mature.

When they get a little older, babies benefit enormously from being more or less at adult level. A child-level view from a pram is good for observing dogs and clutch handbags, certainly; but being closer to adults’ speech and expressions helps babies to become socially attuned, or “humanised”.

What’s more, baby-wearing mothers find they tend to involve their babies in their daily lives more, explaining things and pointing things out, simply because the babies are right there looking interested.

All this said, babywearing is like breastfeeding — it’s great, it’s beneficial, and hopefully it makes life easier in the long run, but it doesn’t come naturally to everyone. Trial and error, support and a few hands-on demos are often needed.

The super mamas on parenting blogs have it down pat — they perform a quick origami act on a piece of organic Bolivian cotton, sling a toddler on their back and a baby on their front, and proceed to wear them for the next 16 hours while visiting the farmers’ market, scrubbing the chicken coop and sewing yet more slings to sell online.

For the rest of us, there’s a definite learning curve.

Actually, I’m a bit of a failure when it comes to babywearing. Baby number one didn’t like the Ergo with the newborn insert, and I was too inexperienced to try out other types of carrier. So I assumed she was just one of those babies who didn’t like babywearing and proceeded to hold her free hand for the next 18 months. I didn’t get much else done but I did develop a left bicep of steel.

With baby number two, I decided to try harder. Having mislaid the Ergo, I sewed up a mei tai, conscientiously triple-stitched and interlined with denim in case he decided to burst loose. He didn’t and I wore him triumphantly for a few months... until he decided babywearing was only for long walks. So much for him napping quietly on my back while I did the dishes.

Fortunately, if you want to give it a go, there are people out there who are much better at baby-wearing than I am! Read their cumulative advice on the right.

What will you wear?

Sarah Tennant eventually found her Ergo — under the window seat. She lives in Hamilton with her husband and children.