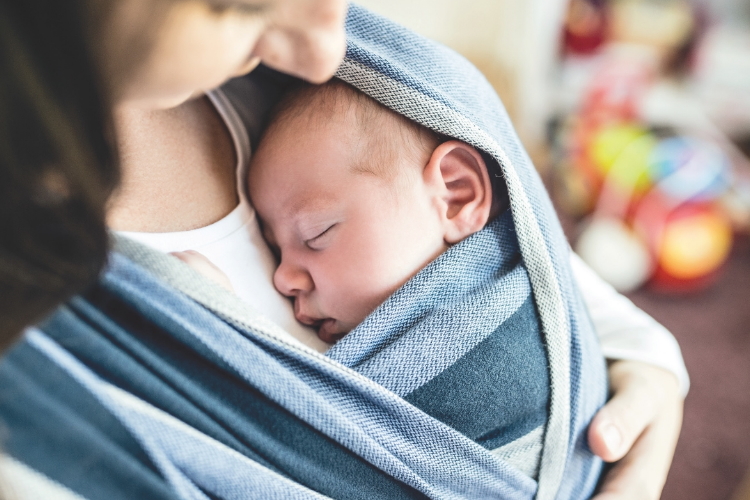 Convenient, comfortable and close to your heart - babywearing has many benefits. Three families share their experiences of carrying baby.

THE SAFE-AND-SOUND WRAP
Nicola Drake, ED nurse and mother of three.
When our third son, Peter, was born, we were armed and ready with a stretchy wrap. We are fans of babywearing and knew we would need to be hands-free for juggling preschoolers more often than not.

When our baby boy was unsettled in the late afternoon, rather than running upstairs all the time to resettle him in his room (while trying to simultaneously cook dinner and meet the needs of our older boys), it was easier to simply wear baby in the wrap. Not only would babywearing allow our littlest to sleep through this crazy time of day, but it also kept him out of harm’s way. His rowdy big brothers would generally be involved in a ball/any-kind-of-toy throwing game. The safest place for baby in this environment is snuggled in close to Mum or Dad.

If Peter was struggling with wind as a newborn, I would 'wear' him on my bare chest with the wrap, underneath a cardigan. This meant we could have skin-to-skin contact without being stuck to the couch.

My husband likes to carry Peter as often as possible too, because he can maximise the feeling of being close and connected, compensating for the time when he's at work. In general, babywearing is a great way to multi-task our way through the demands of parenting three young boys.

WRAP TO GO
Paula George, freelance photographer and videographer.
In the early days I carried our twins, a son and a daughter, in a stretchy wrap but quickly decided it was all a bit of a hassle. Later on I tried out a front-facing soft structured carrier, as our little man loved to be close to me and watch the world at the same time. To be honest, it just didn’t feel very safe having him forward-facing with his legs kind of just dangling down. I mistakenly believed that babywearing was not for our family.

Fast-forward and our little ones are now running, jumping, talking and shouting three-year-olds. We recently took a big trip overseas. During the planning stages, after talking to a few people at The Sleep Store, I realised that, while our family’s initial experiment with babywearing was an epic fail, toddler-carrying could actually work for us.

We bought a couple of Beco carriers and were given lots of advice and demonstrations. The recommendation was to have the carriers on hand while travelling through airports, shopping, and on day trips where the kids would have to walk a fair way.

We flew from Auckland to London, via Singapore, and the carriers were out as soon as we got off the plane in the Singapore airport. It was amazing; the long walk between gates for the transfer was a breeze. I would even go as far as to say that it was really enjoyable. Our tired little man was able to experience all the stimulation of the airport while tucked up in his ‘piggy back carrier’. He had my ear the whole time and chatted away, pointing out all the things that caught his eye.

A big shopping day in Ireland was made so much easier with the carriers – the kids were so much more relaxed. Our little girl tucked Scruffy the bear in with her and even had an afternoon nap while we browsed and bought at several of our favourite British stores, all at our own pace.

The highlight of the trip was a long walk in Teddington’s Bushy Park on a rare hot London day. I remember whispering to our daughter (on my back) to look out for 'Santa’s reindeer on holiday' and she was ecstatic when we found them – even more so when we were able to creep up really close and watch the deer feeding.

If you think babywearing is not for you, it may be time to give it another go. You just need expert help to get the right carrier for your family and your situation. Our Beco carriers are now regular visitors to the Waitakere Ranges and a great new addition to our family.

THE WRAP NAP
Jaimee Clapham, mum of two.
My baby is a catnapper. I'm not sure why it's referred to as a catnap if a baby only sleeps for one sleep cycle. My cat naps for two hours plus, no sweat. And in her own bed.

If you’re familiar with the catnapper, I'm sure you too have found yourself googling: "How to make a baby nap longer". Throw in some wind/trapped gas/reflux/dairy intolerance (both my babies had them all, *sigh*), and you've probably also desperately trawled through online forums for a simple trick to solve the stuck-on-the-couch-and-need-to-use-the-bathroom issue of 'baby will only sleep on me or in the carrier'. Well, for me, that last statement is my trick to solving the problem of short sleeps and, once again, I have surrendered to it.

My solution to the catnap is the wrap nap. On a good day, my little guy can pull off a three-hour midday nap in the wrap. But don't be too impressed – he still stirs with his tummy troubles right on that 45-minute mark. But I only need to jiggle up and down, or walk around the block, and he will transition into another cycle fairly fuss-free. Sure, I get a bit annoyed that I can't be up the ladder painting the last coat in our newly renovated bedroom, or doing some much-needed gardening during nap times, but 'wearing' my wee bubba still allows me to get a lot more done than if he slept in his cot for less than an hour.

He sleeps in the wrap whilst I do house-work or grocery shopping. We walk around the block for kindy pick-ups. Sometimes we just walk around the mall. I can visit friends at any time and not worry about it clashing with a sleep time because he'll just do the wrap nap, listening to my heartbeat and sucking his fingers contentedly while I sip fennel tea and eat dairy-free baking. And on a lazy day, three hours resting on the couch, kept warm by a snuggly, squidgy three-month old, is actually time well spent. Especially when I know he's my last catnapper.