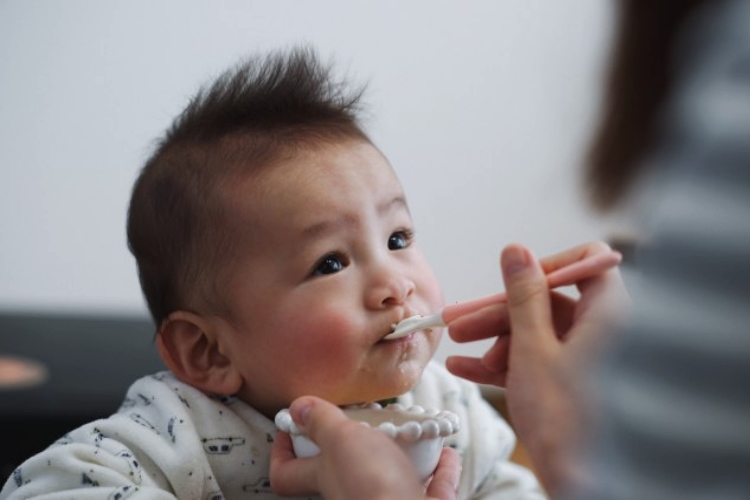 If you have a fussy eater, or have been on a crusade to change  your eating habits, read on. Nutritionist Leanne Cooper  says our relationship with food begins at a very early age.

Why is it that some foods appeal more to us and our children than other foods? Why are some harder to say no to? And why is it so hard to change our eating habits? The answers may lie in our biology but that doesn't mean we can't turn around our eating habits for the good of the whole family.

Taste preferences start earlier than you think
We all know that our early years are an important time for setting up healthy eating habits, but you might be surprised to learn just how early our food preferences can begin.

Recent research has shown that taste preferences develop as early as the foetal stage. If even as an adult, you turn your nose up at mushrooms, but you can't get enough salt and vinegar crisps, then you could blame your mum. The food she ate while you were in the womb would have been passed into the amniotic fluid and from as early as 12 weeks your unborn self was ingesting those flavours, and developing a preference for them.

Researchers at the Monell Chemical Senses Centre in Philadelphia carried out an interesting study where they gave pregnant women in their third trimester carrot juice to drink. Six months later, the babies of those women showed a much greater preference for cereals flavoured with carrot juice than those babies whose mothers didn't drink carrot juice while pregnant.

The same effect occurs via breast milk, which still retains traces of whatever Mum has eaten. The baby will imprint those flavours and recognise them when they start eating solids. You'll know that if you eat a meal with lots of chilli while breastfeeding you may be in for a long night with an upset baby. However, in countries such as Mexico, where chilli is a dietary staple, babies are exposed to hot and spicy foods in the womb and through breast milk much more often and will therefore eat chilli a lot earlier than children from other countries.

The sweet tooth
The preference for sweet is innate. We are designed to reject bitter tastes and some suggest this is a survival mechanism to avoid ingesting poison. This can help explain why many children appear to be predisposed to reject vegetables, particularly those that err on the bitter side. In fact, you could go as far as saying that we're born with a sweet tooth. Dr Leann Birch, the chair of Pennsylvania State University Department of Health and Human Development, has done research that showed "foetuses increase the rate at which they ingest amniotic fluid when a sweet taste is present".

I can just hear those pennies dropping. That explains why those lovely fruit purées you offer baby go down so well, and why he clamps his mouth shut when you offer up a vegetable instead. It's also another reason why you should ensure you eat a well-rounded diet of fruit and vegetables when you're pregnant.

When your baby starts solids it's important to offer him a variety of healthy foods, but because of his innate preference for sweet, you should keep the balance tilted towards vegies. Don't stop offering if they are rejected. It may just be a matter of time before his taste buds adapt to the more bitter foods. While sweet taste preference is one given by nature, parents still control the environment. Remember "parents offer, children choose". If you give into the sweet tastes early it gets harder to break the habit. Offer the good stuff at home and leave the sweet stuff for outings.

But also remember when you're trying to get your baby started on solids and he simply refuses to eat that cauliflower purée, that he may be rejecting it, not because he doesn't like it but because he's put off by the look, smell or texture of it. Many parents report fussiness with food texture which is often a result of a baby being offered smooth food for too long. If you want to encourage healthy food habits, it's important to progress to offering foods of different textures and foods with lumps in it. Introduce mashed rather than puréed foods around eight to nine months and then at nine months pieces of cooked soft vegetables and finger foods.

Because babies have an innate preference for sweet foods, I suggest you start your transition to solids with vegies first, and only add fruit to the mix once he has a good repertoire of vegetables under his belt.

Our love of salt
As well as a love of sweet foods, babies also appear to have a preference for salty foods. However, while our preference for sweet is innate, our liking for salty foods is something we learn. It appears that newborns are not able to differentiate salty tastes, though they quickly learn how by about four months of age - yes, just in time for solids! Avoid using salt in children's meals and remember most of our salt comes from processed foods (80%). Children who are exposed to salt early on and repeatedly ingest it are very likely going to turn out to be adults who love their salt.

So it's important to keep in mind that our environment exerts considerable control over our love of salty (and fatty) foods. The good news is that you can readjust your taste buds by slowly opting for low-salt foods and avoiding heavily salted products. Before you know it you can detect all sorts of fabulous tastes and you will baulk at an overly salted meal.  A word of warning though, while reducing your salt can reduce your desire for it, you may still find that you long harbour a preference for the stuff, making it  easy to revert to old habits if you let up.

Is fatty food comfort food?
Fat really is in a league of its own. Our preference for fatty foods appears to be learnt in a similar fashion to salt. However, our ability to detect and react to fat levels in food is quite different. And while we are able to adjust to a diet lower in fatty tastes, we appear to find it difficult to sustain these diets. It seems that while our taste perceptions can adjust, our want and love for fatty foods lags behind. This might explain why, after a sustained high-fat diet, we find healthy food a little on the "dim" side taste-wise.

You might have heard some people saying "fat tastes good" and arguing that that is why we love fatty foods so much. Well, strictly speaking this is not true, after all there wouldn't be many of us who would say a lump of butter tastes good. It is a little more complex than that - fat improves a food's palatability, which we associate with a positive experience.

Changes to fatty food preferences need to involve a shift of enjoyment to tasty, healthful foods which can be easier said than done. We make our decisions on eating and drinking more by intuition than rational thought. Interestingly, it appears that our love of fatty foods is heightened when we are hungry. How many of us haven't felt that urge for a greasy takeaway after a long day without food? Hunger is not our friend when we are trying to make good food choices.

How children choose food
We know that repeated exposure from as early as the womb is likely to increase a child's acceptance of new tastes and foods, but let's look at the effect of associations with food and the influence of role models on eating habits. The environment in which the exposure to foods occurs also has an impact. A child's initial association with a food may well affect his reaction to it next time. For example, if a child eats a food, has a positive feeling of feeling full, he will be more likely to eat that food again. On the other hand, if the child is punished for refusing to eat or the food makes him gag, then the child will more than likely reject that food in the future.

Children also tend to eat as we do, whether this is a consequence of social learning where our children copy us, or whether it is the result of simple exposure and access to particular foods, is not clear. Regardless, you can take it that eating well yourself and keeping the home for healthy foods will create good habits.

Breaking the bad habits
If you feel that the current stock of advertising and media messages has been ineffective at reducing our waistlines you are probably right. Research tends to suggest that reconditioning to connect healthy food with enjoyment appears more effective in creating change than education alone. For example, if we are made to feel healthy food is appealing, we're more likely to change our habits than if we were are simply warned about the health-related dangers of saturated fat.

We know that what you eat when pregnant and breastfeeding will affect your baby's taste buds. In this case you really are eating for two - so the side benefit of getting baby off to a great start is that you yourself get healthy. Sure, you might have been exposed to lots of lollies and cakes when you were a baby and you may find the habit hard to drop - but it is possible to break the cycle. Take a leaf out of Jamie Oliver's book - it's not just about education, it's about doing, experiencing and enjoying. Enjoy your food, favour the fresh stuff and flavour naturally.

Leanne Cooper is a mum of two and like any parent has faced her share of eating challenges which makes the information she provides not only relevant but realistic. Leanne is director of Cadence Health. Living life on Sydney's Northern beaches with her husband, two boys and a mad dog is the icing on Leanne's cake (healthy icing of course).