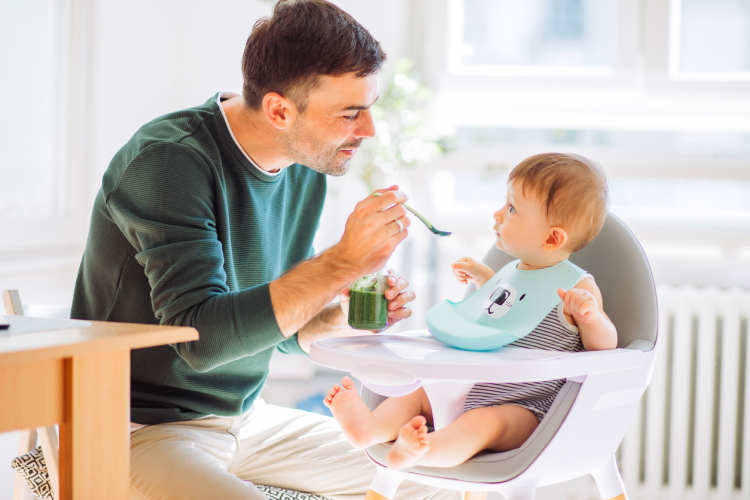 Confused by all the messages about food for babies? Stress no more - here are some handy tips on how to make seamless transitions from one stage to the next.


🥄 When is the right time to start?
During the first four to six months, your baby's nutritional requirements are best met by breast milk or formula. While there is no fixed age to start solids, current recommendations suggest that baby begins at around six months (26 weeks).

Some health care professionals may suggest starting earlier. It is likely current recommendations will change back to four to six months given a tide of research into allergy prevention. The rise in food allergies in western countries may be linked to the delayed method of introducing solids. Stay tuned for more on this.

We also know that the iron stores a baby is born with become depleted by around six months; that's why iron-fortified baby cereals are often recommended as a first food. The discrepancies among guidelines suggest that your best guide is the little person right in front of you. Start your baby when they show a number of signs of readiness, sometime after four months.

🥄 What signs of readiness should I look for?
Today, recommendations on starting solids are based on baby's ability to move food around in their mouth in readiness for swallowing; this is why we start with runny purées and slowly progress to coarse foods, then chunks. Before embarking on solids, baby's feeding and mouth motions are likely to have changed from sucking to chomping, and progress to chewing, plus their tongue no longer protrudes in order to take fluids.

The World Health Organisation (WHO) defines four phases in the introduction of complementary foods, determined by your baby's motor development:


🥄 Other signs to look out for

🥄 Starting too early is not recommended
The healthy bacteria in a baby's intestinal canal doesn't really begin to take hold until four months. Starting solids too early could be a challenge to baby's young immune and digestive systems, increasing the risk of upset tummies and food allergies. Starting prematurely can also play havoc with baby's intake of breast milk or formula, and could even upset maternal milk supply.

🥄 But don't delay either
On the other hand, the idea of delaying solids can be very attractive; after all, what can be more convenient than milk feeds! However, if you wait too long before starting your baby on solids, you can run the risk of compromising baby's nutrition. Starting solids is also important for motor development skills such as chewing.


🥄 What if it's my baby who is delaying things?
For some babies, mushy food just doesn't measure up. Don't worry, just be patient and keep trying. Some simply jump to finger foods at an appropriate age. Feeding meshes can be very useful here if you have a baby who wants to self-feed. If after seven months baby still rejects all solids, or doesn't cope well with lumpy food after nine months, you may want to consult your Plunket nurse, GP, or a feeding specialist, such as a paediatric speech pathologist or deglutitionist.

🥄 What about starting solids to help my baby sleep?
Starting solids to help baby sleep isn't generally successful: The tiny amount that a baby will initially eat and the single foods they start with simply don't compare to the calories and nutrients they gain from a full breastfeed (containing around a whopping 54% fat) or formula feed. You may find introducing an additional breast or formula feed works better.

🥄 How often and how much
In some cases, a food can upset a tiny tummy or developing immune system. The culprit is much easier to pick out if you offer a new food on its own for about three days before introducing another new food. Select just one meal to start with, and offer breastmilk or formula first. Most babies will start with just a teaspoon or two, but over a week or more will quickly work up to much greater quantities. Again, baby is your best guide. Babies will quickly learn to turn their head away when they are full. Babies and young children (up to about three years) are quite good at self-regulation of energy intake. Honouring this appears important in establishing good hunger and satiety (fullness) cues.

Around nine months, you may notice some real changes in the way baby is eating. Not only can you swap to solids before milk feeds, but also baby may be eating a wide range of whole foods. Many babies will be enjoying three full meals a day and two snacks, which can result in a drop in the number of milk feeds. But weaning is a whole other story!

Once you've successfully introduced a range of foods, make sure you alternate them frequently so that baby gains a varied diet. Variety at this early stage may also help you get through that fussy stage in the toddler years.

🥄 First things first
Because of baby's increased requirements for nutrients such as iron, iron-fortified baby cereals are recommended as a starter. If you find that baby rejects infant cereal, you can try a different approach. For example, start off with avocado for three days, it has lots of lovely oils and nutrients. Next, try sweet potato for three days, it is not only tasty but low GI. Once you have the thumbs-up, you can combine the rice cereal with these successfully trialed foods. Before you know it you will have gourmet mixes in the bowl.

Ideally, start with vegetables: it doesn't take long for that innate preference for sweet foods to kick in.

🥄 How can I tell if baby is having enough?
Generally, if your baby is growing and developing at a consistent rate, and is happy and healthy, then it's likely you are both doing great. If you feel your baby is not progressing well, or that their growth and development are being compromised, consult your child health nurse or doctor.

🥄 Fluid plus food
Babies' kidneys are not as adept as ours at processing the waste products from food. Even the smallest sips of clean water (juice is not recommended for babies) throughout the day can go a long way to avoiding problems such as constipation.

🥄 Foods to avoid
There are a few foods that aren't ideal for babies under 12 months (some aren't ideal throughout childhood).

These include:
🍪 Honey should not be given to children under 12 months.

🍪 Tea, which has tannin, and caffeine-containing drinks such as coffee have a powerful drying effect on the body's liquid stores, and tannin reduces iron absorption.

🍪 Small, hard foods should be avoided as they pose a risk of inhaling and choking, e.g. nuts, seeds, popcorn, whole grapes and whole beans.

🍪 Spinach and other high oxalic acid-containing foods may also be a problem until later in the first year if your baby has had any renal (kidney) issues.

🍪 Whole-grain products may not be suitable for very young babies due to the seeds, although light wholemeal bread is fine.

🍪 Sugar and salt should not be added to food for children.

🍪 Cows' milk and other milk alternatives as a drink are not suitable for babies under 12 months as their nutritional makeup won't meet baby's needs.

🍪 Fruit juices are not recommended as they pose a risk of tooth decay and diarrhoea.

🍪 Soft drinks contain a lot of sugar and some contain artificial sweeteners; none provide any nutritional benefit.

Keep all work areas, utensils, and your hands clean, and be aware of food contamination and storage issues. Most of all, remember to have fun and enjoy this time; food is not just about eating, it is nourishment for the soul and body.

Childhood nutritionist Leanne Cooper is mum to two boys. Her book 'What Do I Feed My Baby?' is a step-by-step guide to introducing solids.