Tips: how to introduce first foods to your baby 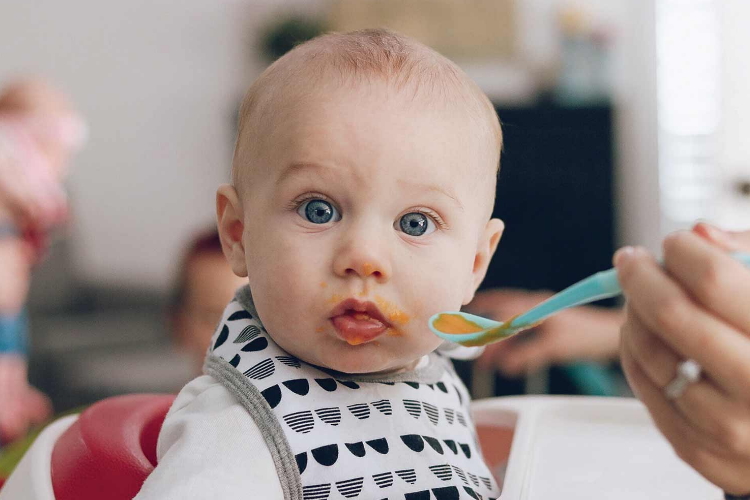 When should solids be introduced?
From 4 to 6 months, although most commonly closer to 6 months as recommended by the Ministry of Health. Up to the first 4 to 6 months of an infant's life, breast milk or formula will provide all their nutritional requirements for growth. At around 6 months, the iron stores that baby gained in utero begin to run low, which is one of the reasons we start solids around this time.

Don't be tempted to start too early
Introducing solids too early can be a burden to an underdeveloped digestive system (most babies' digestive systems remain inadequate up to about 6 months of age), as well as impairing maternal milk supply. Other concerns include increasing the risk of food allergies and exposure to bugs that may lead to diarrhoea and other gastric problems.
Most parents soon realise how convenient milk feeding is (especially if it is your second time around). The tendency to want to delay introducing solids creeps into the minds of many of us, however…
Don't wait too long
According to research, your baby will not benefit from having solids before 6 months. However, if you leave the introduction of solids too late, you risk undermining your baby's nutritional status. Iron and zinc levels, in particular, decrease in breast milk as your baby's demand increases. Other problems include immune challenges and reduced motor development, for example, the skill of chewing.

So how much will baby eat at first?
It generally takes about a month from the time of the first introduced food for babies to work up to taking more than 10 ml a day (just over 2 teaspoons), and a month and half to be able to consume more than 100 ml a day.

Babies who were started on solids at a younger age seem to take longer to get to these amounts; hence introducing solids at 6 months appears to shorten the time.

Food suggestions for bubs starting out
Given the amount that is likely to go in and stay in, baby's first foods will not provide significant nutrients. Infants of less than 6 months will still rely primarily on breast milk or formula for all their nutritional requirements. The point of introducing solids around this time is to prepare baby for new tastes, textures and modes of feeding.
The timing of food groups differs from one family/culture to the next and as yet there are no hard-and-fast rules. The following is a guide only.

What foods at what age?
According to the literature, there are no firm rules for introducing foods. The best we can do is be guided by our baby, and our knowledge of their physical development and digestive system.
1. We know that babies can digest some sugars but find starches more challenging until around 9-10 months.
2. Fat can also be difficult as their livers are still developing.
3. Protein in most cases is fine, although in some it can cause certain allergies, for example cow's milk protein allergy.
4. Babies seem incapable of digesting foods rich in protein (such as meat) until around 9 months.
The World Health Organisation defines four phases in the introduction of 'complimentary foods', determined by baby's motor development:
1. Stage one is getting baby used to eating from a spoon, using pureed foods, once or twice a day.
2. Stage two is becoming accustomed to texture because of improved motor skills.
3. Stage three is the introduction of lumpy texture and thick consistencies, and again improved motor skills by allowing finger foods.
4. Stage four is self-feeding and nearing family meals.
Some tips before starting out
Keep in mind that
Cleanliness and safety
Without doubt, cleanliness is crucial to avoiding food contamination. Most of us are very careful with hygiene; however, when dealing with food, it's worth remembering the following:
Food and safe eating
A recent study of food-related choking in America found that 90% occurred in infants and children under the age of 5 years and 65% in children under 2. Of the 103 foods studied, round-shaped foods were found to be the most common offenders. The study found the following foods to be most risky (in order):
1. Hot dogs and sweets
2. Nuts
3. Grapes
To further avoid choking, ensure your baby eats only while sitting. NEVER leave infants or young children to eat alone. Avoid hard and round small foods; instead chop food into irregular small pieces and quarter grapes. Some reports suggest avoiding sticky foods such as melted cheeses and peanut butter; however, there is a low incidence of asphyxiation with these foods.
Quick tip: Baby-feeding meshes are plastic holders with a mesh bag to hold food that baby can then chew on. Fantastic for teething and safely introducing finger foods, for example a wide range of fruit, vegies and other foods. These replace the home-made version using muslin. A great invention.
What should infants drink?
Babies need more water than adults to digest their food. Why? Because babies' kidneys are not fully developed and therefore not as adept at handling the waste products from the digestion and metabolism of food. Infants' kidneys use more water than adults to dilute and remove waste products from the body. As solids are increasing in volume in the diet, it becomes more important to monitor the amount of water a child is drinking, particularly in the case where milk feeds are being replaced by solid foods.
Water is much better than other fluids, particularly juices and cordials. Ensure that drink bottles and cups are placed in easy-to-see and reachable positions and check the levels throughout the day. Dietary guidelines recommend that children:
It is generally agreed that young children should not be given fruit juice and that water is the most preferable fluid.

Note: Leaving sweeter foods such as fruit till after the introduction of vegetables can improve acceptance of foods that are not sweet.

Working up to 3 meals a day and adding of texture.

Mashed into a soft and lumpy consistency, similar to the texture of cottage cheese. 3-5 milk feeds per day.

11-12 months:
Weaning from breast or bottle if wished at 12 months.

Written by Nutritionist and mother of two Leanne Cooper.