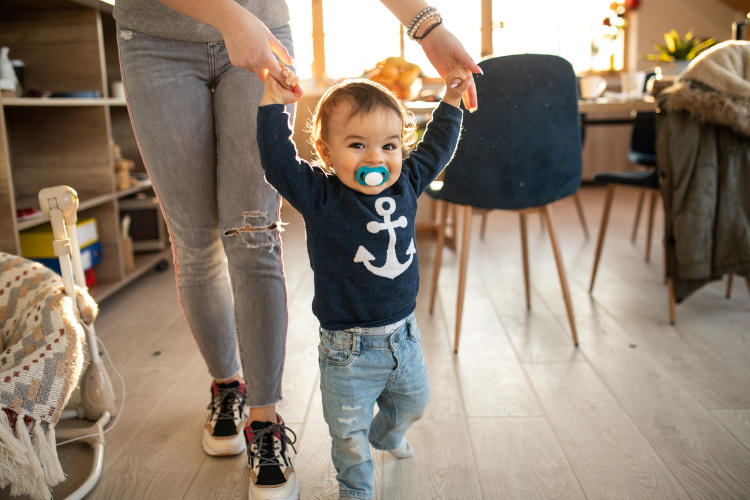 Every baby is different, and baby development milestones will happen at his or her own unique pace. Below are some of the occasions you can expect your baby to achieve during his or her first few years of life. Bear in mind that if your baby was born prematurely, you should measure his or her development based on the date he or she was due, rather than the date he or she was born (known as 'corrected age'). If at any time you have any concerns about your baby's development, contact your general practitioner or Plunket nurse for advice.

The brief guide: What are the normal baby milestones in NZ?

What do babies do first?

There’s no set timeframe that your child must adhere to, no specific baby milestones week by week, and not all babies do things in a particular order. Your baby may do any of the following things first, generally in the first one to three months:

When do babies first smile?

You can expect your baby's first smile anytime between around 2 weeks of age and 8 weeks of age. In the beginning, his or her smile will be a reflex, but by around three months of age, your baby can smile in response to stimulus such as a brightly coloured toy or a familiar face.

When do babies hold their heads up? (6 weeks)

Placing your baby on the floor on his or her tummy will encourage him or her to lift their head, and help them to develop the strong neck and back muscles needed to roll and crawl later on. Around 6 weeks you will notice that your baby is able to hold his or her head up for longer periods (up to several minutes).

When should you start tummy time? (Soon after birth)

Including tummy time could be part of your daily routine soon after birth. It might only be one to two minutes at a time, building up to 10-15 minutes a few times a day. If your baby hates it or you want to gently ease into it, start by sitting comfortably and putting your baby across your lap on their tummy. Or, try lying on your back and having your baby lying on your chest.

When do babies sleep through the night? (6 weeks-2 years)

Before six weeks of age, your baby will wake frequently for feeds during the night. This is necessary as their small stomachs need to be topped up at regular intervals. However, from around six weeks some babies will be able to sleep for an extended period at night without waking to be fed. Every baby is different, some babies will consistently sleep through the night from 6 weeks, and others are still waking regularly at 2 years. If you are concerned that your older baby is not sleeping through the night, your Plunket nurse, Plunket family centre or family GP will be able to provide you with some strategies for promoting good sleeping habits.

Some time between two and four months your baby will begin to laugh or giggle. This will begin as a cooing or gurgling sound, accompanied by smiles, and gradually become a proper laugh.

Your baby's first movement will probably be rolling over, and babies usually begin by learning how to roll from tummy to back and then progress to rolling from back to tummy. Most babies will begin to roll over some time between 4 and 8 months of age.

When can a baby sit up unsupported? (5-9 months)

For your baby to sit up unsupported, he or she must first develop the strong back and neck muscles required to support his or her head when sitting. Lots of tummy time encourages this, as does allowing him or her to sit propped up by pillows, or supported by Mum or Dad's hands. Most babies will be able to sit unsupported by the time they reach 8 months of age, but some may take a little longer. Be aware that he or she will also tire quickly, so placing pillows around just in case he or she topples over is a good idea.

When does a baby get their first tooth? (Around 6 months)

When your baby gets their first tooth varies from baby to baby, but it will nearly always be one of the front bottom teeth. If your baby develops teeth before this or after 6 months it will be completely normal and nothing to worry about. The first teeth to come through are usually the bottom front teeth, followed by the top front teeth. The back teeth will follow, and by the time your baby is around 2 years of age, he or she will have a full set of 20 baby teeth. See our teeth and teething section for more information and also for tips on caring for your baby's precious first teeth.

Crawling is a complex skill for a baby to learn, and usually occurs in several stages. To begin with, baby will be able to support his or head well when placed on their tummy, and will begin to push themselves up onto their arms. Many babies then progress to a "Commando" style crawl - moving along with their tummy on the ground, using their arms and legs to propel them. Later, he or she will be able to support their own weight on their hands and knees and will progress to a full crawling motion. Some babies can "Commando" crawl from as young as 4 months, but the crawling process generally begins some time between 6 and 10 months. You can find more information on crawling here.

There is often debate between parents about whether their baby's first word will be Mama or Dada. More often, baby's first word is Dada, because it is an easier sound to make than Mama. Your baby will begin vocalising (making babbling noises) as early as 8-10 weeks, but as he or she gets older these sounds will develop and become more recognisable.

By around 7 months your baby may be able to say simple words, but it is unlikely he or she understands the difference between these sounds and other nonsense sounds they make. You can encourage your baby to talk by speaking clearly and allowing him or her to watch your mouth moving and try to mimic the sounds. By their first birthday anniversary, they will hopefully be able to say Mum or Dad.

By 15 months most babies are able to say at least one or two simple words and understand what they mean.

Most parents can't wait for their baby's first steps, but every baby is different, and he or she will make the step from crawling to walking at their own pace. He or she will begin by learning how to pull themselves up on a solid object such as a couch or low table, and then progress to walking around holding onto such objects. From here, he or she will learn to stand without the support of the furniture, and may begin taking steps whilst holding on to your fingers.

Eventually, they will progress to taking independent steps, and this will increase as he or she develops greater confidence. Many parents worry that their baby is slow to begin walking, especially when they see other babies walking as young as 10 or 11 months, but the average age for a baby to take his or her first steps is 13 months, and some are 18 months before they truly master the skill of walking independently. Babies are naturally curious, and their discovery of walking is truly a milepost for them (and any animals you have in the house).

What age do babies potty train? (18 months to four years)

Some children seem to want to learn to potty train from 18 months, but most are closer to 24 months to three years. You don’t want to push your child until they are ready, as the process simply takes longer. Although this is a big breakthrough, you don’t want to rush it.

Keep an eye out for the signs they are ready to learn; they will:

Night training is different, and your child may only be dry through the night by five to six years old.

What should my 1 month old be doing?

Your newborn will arrive with reflexes essential to life:

And in the first month of their life will rapidly develop other skills and senses.

Some babies will also be able to respond to loud noises, smile, and vocalise other than crying.

What a 2 month old baby should be doing?

Your baby should be getting more control over their body, and their motor skills will be improving. Their head movements will become steadier. They may be able to get their hands to their mouth, and suck on their own fingers. Their vision is improving, and they can see faces at about 45cm away.