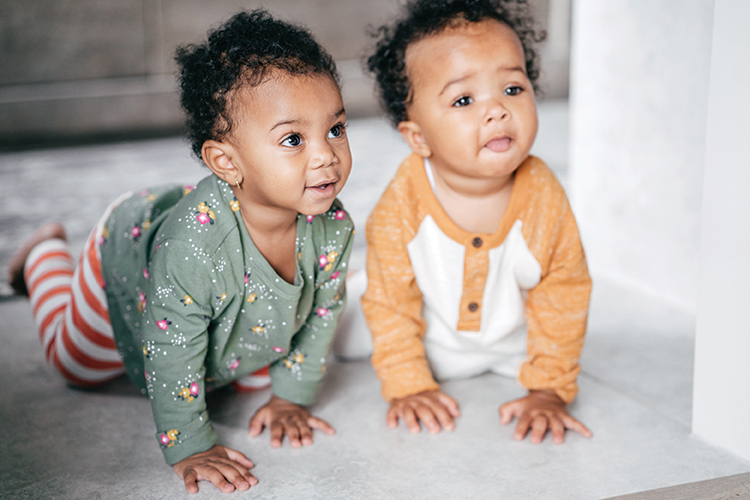 When does a baby start crawling? If they’ve been rolling around for a few months, or rocking, or commando-style pulling themselves along on their tummy, they are well on their way. But, they haven't quite figured out how to get their arms and legs coordinated so they can go to where they want to go (usually, in the direction of the cat). When do human babies crawl, and can you help them master the skill?

Do babies sit up or crawl first?

If you're curious to know when your baby is going to start crawling, keep in mind that crawling usually happens after your baby has mastered the art of sitting. Crawling sometimes doesn't happen until several months after they learn to sit, although some babies learn to crawl first and sit soon afterwards. A baby's desire and enthusiasm to crawl will coincide with their desire to lie on their stomach. They may have once hated tummy time, but once they can roll over themselves and get used to laying on their belly, and have then started to get up on all fours, crawling should follow soon after.

How to encourage baby to crawl

Floor time play should be encouraged, so your baby can discover the art of holding their head up and pushing up on their hands. A proper crawling position, which is moving along deliberately with the tummy off the ground, is unusual before six months.

However, even though your baby has not fully mastered crawling, it doesn't mean that they are totally unable to move at all, so be mindful that they can easily put themselves in dangerous situations. You may turn your back for an instant and turn around to find that they have inched their way over to the TV cord or are pulling at a low-hanging tablecloth! Now is the time to child-proof your house, if you have not already done so -- it's better to take care of this now, while your baby is still relatively stationary, because once they're crawling, they will really get into things!

If your baby objects to lying on their tummy and prefers to lie on their back, don't fear -- they are probably just enjoying the social contact of watching you. Once they are old enough to roll onto their stomach independently, they will do so, so there is no need to force them to spend time on their stomach.

When do babies crawl in NZ

Not all babies will learn to crawl at the same time and there’s no definite baby-crawling age starting time. Some take two days to master the skill, while some take two months to really get going. Some babies don't crawl at all -- they learn to sit and then they bum-shuffle around, or simply spend lots of time rolling to their desired destination. Some babies go right from sitting into pulling up on furniture and cruising around. Often at about the ninth month, when a baby may just begin crawling, the direction may be wrong and they may go backwards instead of the intended forward. There is no set "normal" for crawling, and the average age for crawling is anytime between six months and one year.

What are the signs that my baby is ready to crawl?

There are a few signs that your baby crawling is imminent. They should be happily sitting on their own and have good control over that. You’ll notice them getting on all fours and rocking backwards and forwards. While they can’t quite co-ordinate their hands and legs to propel them forwards, they are trying. Finally, they’ll be trying to reach and grab things and getting really frustrated when it’s out of reach, and squirming in the direction of the item that they want.

How can you help your baby learn to crawl?

If you are wondering how to teach a baby to crawl or sit, you can’t. Simply give them plenty of opportunities to learn it themselves. Here are some things to remember:

☙ Let them play on the floor

☙ Protect their soft skin on their knees

☙ Move dangers out of their way

When does a baby start walking?

Your baby will learn how to walk when he or she is a toddler (from one year to 2.5 years). Walking is a big achievement, and will dramatically change your toddler's life, as well as yours. Where you may once have been able to leave your baby in a room for a few minutes alone while you ran to the bathroom, and returned to find them in the same place, you may find that you will now have to watch them every second. They also may resist being in their pram, front-pack or sling, as they want to practice this new skill. And they may find it hard to sleep at night just as they learn to walk, as babies who are learning a new skill quite often wake up in the night to practise it in their cot.

There are several stages that a baby must go through to learn how to walk. The age that these stages are reached will vary, as every baby is different.

☙ Phase One: They start by pulling themselves up into a standing position. Then, they’ll begin moving while hanging onto furniture or another person's hands.

☙ Phase Two: Same as phase one, but they are far more sure of themselves with better bearing and more weight on the feet. They also start to move their hands and feet in co-ordination.

☙ Phase Three: They will cross small gaps between furniture or parent’s arms. They will not release one until the other can be reached.

☙ Phase Four: Babies will cross a small, unsupported gap. This usually comes when your child can stand alone without assistance.

☙ Phase Five: Walking two or three steps with no support. This is when you should get the camera out to record those first steps!

If your child isn't walking and you are concerned about their development, talk to your well child care provider. Remember that all babies develop differently, and just because another baby of the same age as your child is walking doesn't mean that your child is behind. The other parents may actually be jealous of you, as you're not yet being run off your feet chasing after a little toddler!

The window of opportunity for them learning to walk is broad. The same as asking when do babies start crawling, there is no one age where all babies learn to walk. One twin may start walking at 9 months, while the other not until a full nine months later; there is no right or wrong. While walking is considered to be a huge milestone, it’s also the start of a lot more work for the parents and maybe your child being a late walker is actually a very good thing.