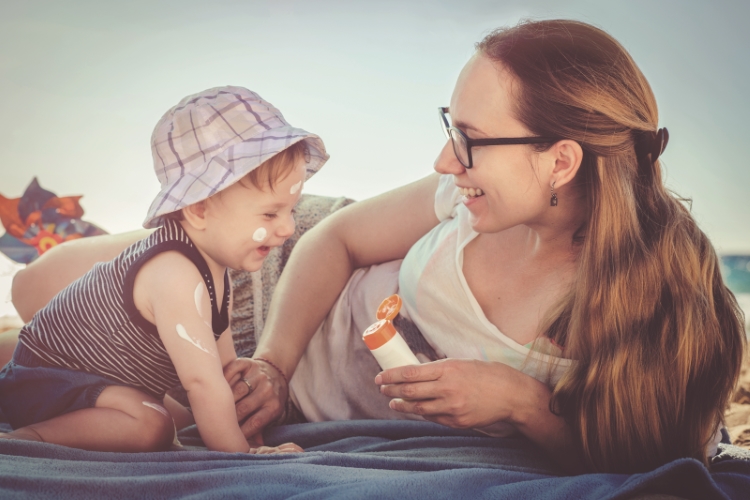 Leading skincare specialist Dr Sharad Paul sheds light on what to look for in sunscreen, and how best to protect your baby’s skin in summer.

We all know the importance of slip-slop-slapping with sunscreen and hats over summer, but do we really know what sunscreen to use on our children, and why? The habits you create with your little one now are potentially their habits for a lifetime, and will have a significant impact on your child’s skin in later years. So now’s the time to get sun smart!

The exact age to start applying sunscreen to children is the subject of much debate in the skincare world. Researchers are concerned that using sunscreen too early in life could prevent the skin from ‘learning’ to tan properly and could increase their risk. Also, children with darker skin (for example, Indian, African, Polynesian etc) have a very low chance of getting skin cancer, as they have a natural ability to tan when exposed to the sun due to the higher melanin levels in their skin. I suggest you don’t put sunscreen on your baby before they’re six months old, and instead ensure they’re well covered from head to toe and not outside during the hottest parts of the day.

UNDERSTANDING YOUR SUNSCREEN
The SPF acronym stands for Sun Protection Factor, which is a model of how many of the sun’s rays will affect your skin. There’s actually not that much difference between the numbers. Most people assume an SPF 50 would be almost twice as good, or twice as strong as an SPF 30. It’s not. There’s a 1% difference between the two. If you use an SPF 50, you are protected from 98% of the sun’s rays. An SPF 30 protects against 97%, and SPF 15 protects against 93%. If you see anything over SPF 50, don’t bother with it. The USA Drug and Food Administration, one of the strictest regulators in the world, has banned any sunscreens with an SPF above a 50, saying it provides users with a false sense of security. However, please remember that any SPF factor is better than none.

The next thing to check is that it is broad spectrum – that means it will protect against both UVA and UVB rays. Essentially, UVA protects against ageing and melanoma, and the UVB against the other types of skin cancer.

Be aware, when you buy locally made sunscreens in New Zealand, the manufacturers haven’t had to prove any of their claims. Our laws consider sunscreen as a cosmetic, not a medical treatment. That means sunscreen brands can say their product is SPF 50, but it will not have been tested as being so. It also means the listed ingredients haven’t been certified, or even proven to be in the bottle. In 2017, Consumer NZ tested 20 brands of sunscreen and found that only nine met their SPF label claim and the requirements for broad-spectrum protection. Also, it pays to check where your sunscreen is made. Europe has the strictest measures, while Australia and the USA have some standards sunscreens must meet. Just make sure you take a look at the certification behind the brand, so you can have confidence in the SPF, and what’s in the bottle.

AU NATUREL?
The trend toward ‘natural’ sunscreens is concerning, only because it can be more difficult to ensure quality and to meet SPF standards, so ensure you are vigilant. For example, Consumer NZ reported on a natural sunscreen that claimed an SPF of between 28 and 50, but tests showed it actually came in at SPF 5. Don’t be too concerned about using sunscreens with chemicals or minerals, as you need them to protect your skin. But, here’s the thing: the two main filters in sunscreen are zinc oxide and titanium dioxide, and both of them are minerals present in nature. If you want to protect your child against sunburn and skin cancer, you need to make sure that at least one of those two ingredients is in your sunscreen bottle.

Ingredients to avoid are oxybenzone, PABA, homosalate and octocrylene. That’s because they have been deemed ‘potentially toxic’, and some have been known to have some hormonal effects. Other chemicals to keep an eye out for are butyloctyl salicylate and bisabolol. These are often added to sunscreens to help get a higher SPF rating, but one of their side effects is to act as an anti-inflammatory. This means the skin won’t go red when it’s burning, and if you don’t see your skin turn red, you’ll be less likely to reapply sunscreen as often as you should.

One concern the public has raised about sunscreens is to do with the invisible nano-particles they can contain. These tiny chemical particles make sunscreen appear less noticeable, and also make it whiter. There’s some concern that, if these chemical particles enter our skin cells, they cannot be removed by the body naturally. There’s also concern that they could damage coral reefs. The issue of nanoparticles in sunscreen is a complex one, for example, there are concerns around the effects of the inhalation of spray-on sunscreen. These concerns are an important part of current skin research.

APPLY GENEROUSLY
Now you know what to look for in your sunscreen, the next most important thing is how much to use (most people use far too little). In practice, ‘the right amount’ is the equivalent of a shot glass (two tablespoons) of sunscreen to the exposed areas of the face and body – that’s a dollar- coin-sized dollop to the face alone. The same logic applies to children: a third of a shot glass for those under two, and half a shot glass for those older than two.

You need to be reapplying sunscreen every two hours during the day, and every hour-and-a-half if you’re in the water. I’m a dad, I know the struggle of trying to put sunscreen on young children. It’s hard, but starting young means it’ll be a habit they keep for life. My best advice here is to rub moisturiser on your child’s arms, legs, face, ears and back of the neck each morning. When moisturiser becomes sunscreen in summer months, your child is used to it and will put up with it a lot more than a child who only has cream applied for three months of the year. Once they’re toddlers, start teaching them how to put it on themselves. When they go to school, they’ll be able to do it themselves, reducing their chances of getting burnt.

I’m often asked about spray sunscreens, and I don’t recommend them, as it’s easy to miss some areas of the body, and hard to get the amount right. To make sure you’re getting a good application, you’d need to spray each limb at least four times and do it inside, so the spray isn’t caught by the wind. Doing it properly would mean you’d end up going through a bottle a day, and that isn’t cost-effective.

If your child does get sunburnt, treat it like you would with any burn. Put the affected area under cold water for half an hour, ice if necessary, moisturise thoroughly and regularly, and give them pain medication. ☙ Bathtime: I see no need for soapy products in your baby’s bathwater. Soap and bubblebath dries skin out, and young
children need their skin to be hydrated. When they’re older and getting grubby at daycare, use a soap-free cleanser instead. Because they don’t contain soap, the pH level of skin stays the same.

☙ Moisturisers: These are very important, so use them as much as you can on your children. Moisturising is key for good healthy skin. After a bath, moisturise or rub a suitable oil all over your child. Doing this as massage can be a lovely part of the bedtime routine.

☙ Rashes: For children under two years old, the most common type is nappy rash. You’ll likely notice the redness very quickly. Try to let your child have some nappy-free time each day, and use a barrier cream. If it doesn’t improve after a few days, take your child to the doctor, as it could be fungal. Doctors usually prescribe a really thick barrier cream that works better than most off-the-shelf products. Other all-over body rashes are often viral, and there’s not much you or the doctors can do about them, but do still get them checked out.

☙ Swimming: Most parents worry about the effect of chlorine from swimming pools on their child’s skin, but for most children, chlorine won’t do anything. For children with eczema, as above, coat them with moisturiser and give them a shower immediately after their swim and then moisturise again. Kids with no skin conditions don’t need to shower straight away, but moisturiser is always good.

☙ Insect bites: Prevention is obviously key here, so a skin-safe bug spray is worthwhile. It’s also important to avoid spraying near mouths or noses. If your child does get a bite, put an ice cube on it for a minute or two. If the bite goes red immediately or looks infected, take your child to the doctor straight away, as they might be having an allergic reaction. If so, you will likely be prescribed antihistamines to use in case it happens again.

Dr Sharad Paul is a world-leading skin cancer expert based in West Auckland. He is a skin cancer doctor, academic and surgical consultant. Since opening in 1996, his practice has performed more than 46,000 skin cancer surgeries – one of the largest amounts of any clinic in the world. Dr Paul has one daughter, now at university, and in his spare time he teaches creative writing to primary school students.