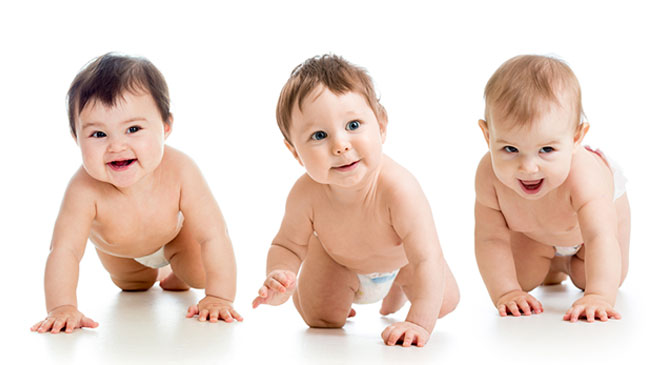 Should you swaddle your baby's bottom in cloth or disposables? You can use both, says Kate Meads, aka The Nappy Lady.
When women get pregnant, they may consider using cloth nappies for a brief moment, but they generally tend to just go with the convenience of disposables from day one. Why is this?
Personally, I just followed everyone else's lead and assumed that cloth nappies would be too hard because all I heard was that if I used cloth, I'd be doing loads of extra washing. I went out and bought a nappy wrapper and hundreds of disposable nappies without a single thought (except for the inevitable hole in our bank account). I was just doing what everyone else was doing.
It didn't matter that during the endless nights of breast-feeding, the triple leak guards on the disposable nappies leaked, so we were changing all of our son's clothes and bedding nearly every night. We just got on with it like everyone else and did the extra washing. Then came the brainwave - if we were doing all of this extra washing anyway, we might as well invest in some cloth nappies, save some money, and do our bit for the environment.
The advantage, when using a combination of nappy styles, is that some nappies are better at some jobs than others. For example, some modern cloth nappies (MCNs) may actually be more efficient at containing newborn poo than disposables. Also, some parents have children that react to different fabrics being against their skin, so using combinations of nappies along with nappy-free time will give a baby's sensitive skin a good break. Another advantage when combining the two types of nappies is that if you have a few good-quality MCNs and you run out of disposables, you don't have to run off to the shop just to grab a pack of nappies.
The best news is that cloth nappies have evolved and become far more effective and hi-tech. They no longer require soaking, folding, or pins, and they can save you money even if you are only using them part-time. And there is a huge array of cloth nappies that you can choose from.

Which nappy should I choose?
Wow, did you even realise that there were so many brands available? It is like a whole secret world that you had no idea existed until you entered that aisle at the supermarket,  or started trawling cloth nappy websites. It's like you've just opened a box of chocolates without one of those handy little guides to tell you which is the caramel and which is the dreaded Cherry Ripe. How are you supposed to know which one of these modern-day wonders is the best for your little one?
This is where cloth nappies have got a little out of control. All of a sudden, you're confronted with terms like fitted nappies, pockets, AIO's, OSFA, pre-folds, all in twos, snap in ones, inserts, boosters, covers, wraps, liners... The list goes on - and that's before we even get to the different brands!
So once again, cloth nappies go back to being a difficult choice. This is where my alter ego, The Nappy Lady, comes in. People contact me with cloth nappy jargon brain. They are just so confused. They know they want to use cloth nappies but they have no idea where to start. So I take them back to the basics of cloth nappies.

Cloth nappy basics
There are two main parts to every cloth nappy system.

Inside the nappy, you have the option of using:

So now you know what the different parts of the nappies do, I can explain the styles. With so many different styles, this is what generally confuses most parents who are new to cloth nappies. However, now that you know there are three basic parts to most nappy systems, choosing a style should be less confusing once you know the features of each style that is available.

Types of cloth nappies
There are four main styles of nappy available today. Each has its own very unique benefit that makes it different to the other styles. Obviously, nappies will also vary between brands so this is just a basic overview of the main styles.

The part-time cloth nappy user
So what will you need to give cloth nappies a try, part-time? Newborns are changed around seven to 10 times per day, and toddlers only around three to five times per day, so it depends on the age of your child as to how many nappies you may need to invest in to get started. If you are just wanting to see if cloth nappies can fit in with your lifestyle, my suggestion is to get a couple of nappies or trial packs and give it a go. For part-time use, if you are just using them on an at-home day, then start with around four to six nappies and see how you go. Remember if you get really addicted you can always get more. You may even want to try a different style or brand. It is important to remember that all nappies, whether they are cloth or disposable, should be changed with the same regularity, regardless of how much moisture they can absorb. This is to prevent bacterial build-up in the nappy which can cause skin irritation (nappy rash).
The best things about having a go with MCNs is that your baby gets to sit in something else for a change, you will save some serious money, and you will help the environment by reducing the amount of nappies in landfill. If you don't like them, swap with a friend and try a different brand, or you can sell them on TradeMe. By using just one cloth nappy per day for one nappy change, you will replace around 750 disposables over two years. Using cloth nappies is not as hard as you may think, and in some cases, they will work far better than you ever expected.

Over the past five years, Kate Meads' knowledge of cloth nappies has become so extensive that she was given the title of "The Nappy Lady". Last year Kate set up www.thenappylady.co.nz because she saw a need to provide unbiased information and advice for parents considering cloth nappies. She runs regular nappy workshops for different organisations, has been a guest speaker at parent and child conferences, and has been on TV programmes such as Good Morning, Breakfast, and tvCentral.