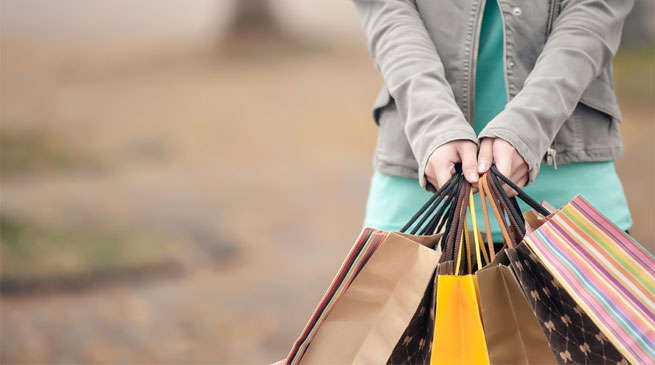 Blissful browsing can lose its gloss with a small anti-shopper in tow. Simonne Walmsley makes a retail run for it, sans enfant.

I've been fantisising. It's been over a year since the need for my confession, and I've missed being very bad indeed. Well, maybe not over a year since the need for my confession, maybe over a year since the need for my confession actually resulted in my confession, but you get the general idea. I haven't been shopping since my son was born and I need to go shopping. How I've missed coffee-fuelled crisp weekend mornings happily spent in Ponsonby boutiques, the resultant wondering how I'll get my newly acquired treasures past my husband, as I carefully pack bags within bags in an attempt to reduce bulk and making mental notes that the Mastercard bill will be due in the letterbox around the end of the month and it would be best for preservation of life if it were to be promptly burned on arrival, or, if absolutely necessary, eaten between the letterbox and the house.

It's fair to concede, and you may have noticed, that I enjoy a spot of shopping - in much the same was as a lion enjoys a good wildebeest, I'd say. The hunt, the find, the… Well, you know what happens to the wildebeest next. No need to go into the gory detail, really. I love to trek into the shopping district, as early as doesn't fall into the category of ridiculous, before the rest of the weekend shoppers and brunchers come out to play and so I can get a park somewhere that means I can wear unsuitable footwear without risk of my feet falling off from actually having to walk anywhere. And when there...Oh! There's much to be said for making that perfect find, nestled on the racks or sitting, waiting on a shelf, just for me, falling happily and instantly in love, complete with joyous heart palpitations, then of course having actual palpitations when I oh so casually take a peek at the price tag, and that peek being quickly followed by some seriously dubious accounting to justify the indulgence before cheerfully continuing on my way, moving ever closer to my next find. Bliss.

So, I start plotting. I will abandon my not-shopping-friendly child to the able care of his father, I will make my adventure and I. Will. Shop. I will shop without risk of finding myself in a changing room in my desperately-in-need-of-replacement-and-burning underwear while the little terrorist I gave birth to disappears through the curtain into the store and probably out the main door as well, faster than you can say, "Ah, hell!" I will drink my coffee and eat my noms, savouring instead of wearing either or both, which is my absolute preference, but mostly not the way it works out. There will be no need to move like lightning to accommodate the limits of toddlery tolerance, nor the subsequent scarlet-faced child loudly protesting from the platform of his buggy. There will also be no wrestling of said child into a sling only to have him deftly and immediately twist himself back out, launching loudly ground-ward and thereafter continuing to wildly gesticulate and remonstrate for the duration. There most certainly will be no repeats of prior attempts at civilised excursions which were, I assure you, anything but.

You may wonder, as did I, how bad it could be, as you channel visions of the relaxed, blissful mothers you see out and about, transporting their contented offspring however they choose, in buggy or sling, stopping for coffee, eating lunch, browsing storefronts and treasures within, perhaps conversing with a friend who came along. Yes, quite. Heaven knows what they drug the kids with because I'm much more familiar with everyone within a 10-kilometre radius being aware of our general location, and not in a good way.

Let me give you the example of the great coat-acquiring horror of last winter. The plan was simple, to find and purchase a new coat. I'd learned from past shopping attempts and had first narrowed it down to a store and even a style courtesy of the internet and email. What could go wrong? All that was needed was to walk through the door, make my selection, and voila! New coat! For once, I would be that relaxed mother out shopping with her contented offspring.

Unfortunately, what actually ensued was a process requiring much speed and contortion as I jiggled the flailing, disagreeable anti-shopper simultaneously with attempting to try on the first thing I saw that looked like it might keep rain off and wind out, paring "trying on" down to shoving an arm in to make sure said arm fit and noting to see if it looked like it'd do up, before breathing deeply through an appalling and un-anticipated test of fabric durability and stain resistance. I don't know who was doing more praying - the sales assistant that I would get out of her store and never return, or me that I'd actually make it out of the store instead of hanging myself off one of the racks.

After that, in my desperation, I have also been known to attempt shopping with the husband in tow, which has significant kid-wrangling advantages, but there's the ever-present, very real risk that he's paying just a bit more attention to what I'm doing than he's letting on, and despite the not insignificant level of distraction that the mini-us generally provides, that he's hearing more of the hushed conversation at the till than he's letting on to.

So, I plotted and it was exactly as I'd been fantisising when I walked around the familiar leafy corner, and laid eyes on the small courtyard entrance of Agnes Curran which would lead me to the haven where I'd contemplate my morning, blissfully unaware of exactly how much I was about to spend on a pair of shoes at Mei Mei.

There is no better way to start a day shopping than sitting in my favourite cafe on a beautiful morning full of shopping promise, savouring an excellent coffee. Perhaps cake also, even though it's far too early for cake, because they do a divine lemon syrup cake.

I'm a creature of habit and many a shopping morning has started this way for me. It was wonderful to be sitting again within the maelstrom of happy chaos, at the large well-loved middle table which squeezes itself in amongst cabinets and shelves housing all manner of bits and pieces and supports a large Fun Ho! dump truck with its tray filled with milkshake lollies, and a haphazard pile of Saturday morning papers. There are books and old things everywhere and a number of knitted tea cosies that make me desperately want a teapot, while I perch on my metal stool absorbing everything as the singing café staff offer information on the soundtrack to our coffee.

I promised myself before setting out that I wouldn't look at my watch. At all. The plan was that the home front was covered and I was to spend the day drinking coffee, browsing boutiques and shopping until I needed to spend the next ten years confessing to my sins.

So, I did, which is, as it turns out rather unexpectedly, where I truly appreciated for the first time how my perception of time has changed with having a toddler. When I phoned my husband to say I was on my way home after a relaxing day spent, feeling absolutely indulgent, my promise not to look at my watch honoured absolutely, a single, horrified glance down showed me that only two-and-a-half hours had passed since I had left the house, and 20 minutes of that was spent looking for my car because I couldn't remember what side street I'd parked it down. Don't even ask me about travel time (20 minutes). Actually, horrified doesn't even begin to cover it.

As my old shopping-pro self snorted derisively at my current out-of-practice self, I considered taking another run at it but, actually, I was a bit knackered and I'd achieved the blissful shopping-happiness I'd been dreaming of for weeks, albeit in embarrassingly record time.

I went, I saw, I conquered a pair of shoes, and it felt like the perfect day. I may also have conquered a pair of jeans, a cardy and a set of three Tony Sly Rustic Range bowls with butter-yellow glazing to add to the perfection, but I will neither confirm nor deny, and the credit card account which could prove it never did seem to arrive in the mail… No idea what happened to it.

Simonne is mother to a toddler and married to Al, who knows exactly why the credit card bills keep disappearing and intends to get to the next one first.