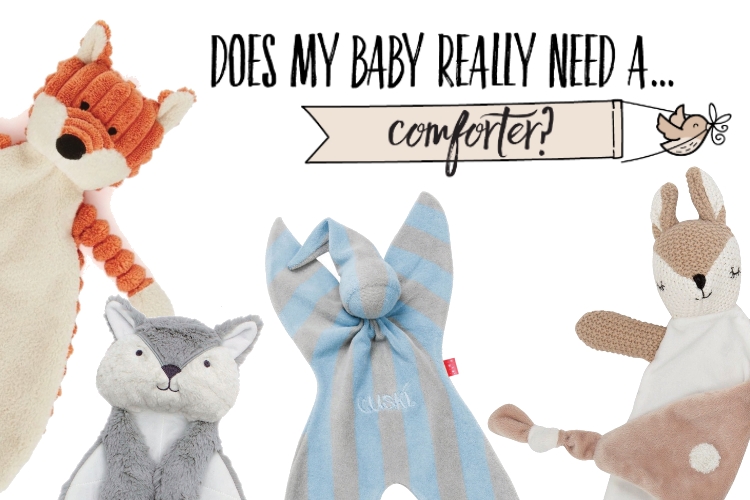 When soothing your little one, a comforter can be your best friend as well as your baby’s, explains Grace Nixon, AKA the baby lady.

A comforter is an item that your baby will associate with you, and with the comfort and security of your arms. Most comforters are thin pieces of cloth cut into shapes, usually animals, so they’re like a soft toy but without the stuffing. They need to be safe for your baby to sleep with, and not pose any suffocation risk, so they’re generally made from breathable easily washable fabrics. Some make gentle sounds, while others have ‘arms’ to which you can attach a dummy, if required.

It’s a great idea to get your baby attached to a comforter as it can be used in multiple ways. Many parents use them as a sleep association tool to help their baby know when it’s sleep time. Over time, baby will learn to use it to resettle, as he can find the comforter himself during the night. You could pop two or three in the cot so baby can find at least one easily!

Comforters provide an extra layer of soothing if your baby is sick or upset, when you’re travelling or when there’s been a major change in their life. It’s common for babies to have a period of separation anxiety (usually around nine months) and a comforter can be especially helpful at this time.

So how do i get my baby attached to a comforter?
The first and most successful method is to put the comforter between you and your baby every time you breast or bottle-feed. That way, your baby creates a positive association with it as a source of comfort, pleasure, satisfaction and security. In this way, the comforter becomes an extension of you, but you’re not the sole source of your baby’s comfort. Another alternative is to put the comforter inside your top for a few hours so that it picks up your scent.

The main challenge with having your baby attached to a comforter is their dependence on it. The day you lose it will most likely be the day they really need it, so as I mentioned, to avoid potential meltdowns, I recommend you always have at least two comforters on the go! It also means always remembering to take it with you whenever you go out. Some parents may not want to use a comforter for fear it will interfere with their own ability to soothe their baby, but I believe that it simply enhances the comfort parents already provide.

As your child gets older, you might decide to wean him off the comforter, but most will just outgrow it.