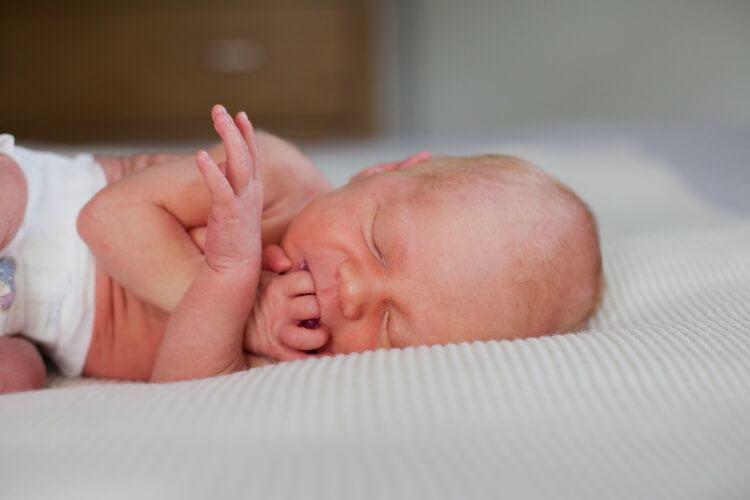 Meet Oliver, a delightful little guy whose family allowed us to follow his first six weeks of life, week by week.

Oliver’s mum, Carly:
“Oliver has been very content and sleepy in his first week. He sleeps long spells (four hours on average), feeds for one hour and then back down to sleep. Amazing! He hasn’t really opened his eyes much this week and when he does he isn’t focusing on anything.

“You can pretty much say life consists of sleeping, eating and changing nappies. I’m thinking how easy it is having a newborn baby all over again as it had been six and half years since my first son was born and I had forgotten.

“I’m reminded how important it is for mums to enjoy our sleeping babies and rest up while we can!” Midwife, Amy Hunt:
“Adjusting to life at home with a new baby can be overwhelming. Although in these early days your baby will spend the majority of their time sleeping, he doesn’t know the difference between day and night and you can quickly become exhausted.

“If you are breastfeeding, your baby will feed frequently until your milk comes in around day three. Each feed could take anything from ten minutes to 45 minutes or longer, there is a wide range of ‘normal’.

“Around day three, women commonly experience what is known as the ‘baby blues’. You may feel fragile and tearful and you can’t pinpoint why. Within a few days you should start to feel better but if things don’t improve, tell your midwife or GP as you could be at risk of developing postnatal depression.

“Set good boundaries around visitors, it’s okay to switch your phone off, or make a day to have people visit a couple of weeks down the track. Remember you are still recovering physically from the birth so take things easy, ensure you are drinking plenty of water and eat a well-balanced diet.” Oliver’s mum, Carly:
“Oliver is still very content and sleeping for three to four hours at a time. We have been swaddling him, which helps him to sleep – he doesn’t like it at first but soon settles down.

“My milk has come in now, but I must say it was very sore when it arrived. Oliver is latching well for some feeds and others not so much – we are both still learning the art of breastfeeding.” Midwife, Amy Hunt:
“Babies will often have growth spurts where things suddenly seem to go crazy. Your baby may go from feeding two to three hourly to feeding every hour. These growth spurts usually only last a day or two. Hang in there during these times as these frequent feeds are important for increasing your milk supply. Formula fed babies also may show growth spurt behaviours and this is a sign that he may want to increase his milk intake. Monitoring babies output is a good way of ensuring he is getting enough milk, you should expect to change between six and eight wet nappies a day. Both breast and formula fed babies will likely pass bowel motions several times a day in the first weeks.” Oliver’s mum, Carly:
“Oliver is getting into some sort of routine this week. He is still sleeping then feeding three-hourly over a 24-hour period, however some nights he has slept only two hours at a time. When he wakes he cries, wanting the breast straight away, so I am feeding one side, then burping him, changing his nappy, then feeding on the other side and burping again.

“I am giving him some playtime lying under his play gym and also some tummy time now. Oliver is content to “play” until he starts to show me the tired signs – jerky arm movements, starring at an object, crying or yawning. Sometimes playtime can last 20 minutes, other times only five. Then it’s swaddle and back down to bed.

“He’s also starting to enjoy a massage after his evening bath. I am hoping this evening bath and massage routine will help him connect night-time to sleep and eventually he’ll sleep through (yes I know, it’s early days, but it pays to be optimistic).” Midwife, Amy Hunt:
“You will be beginning to get to know your baby and his different needs and different cries. Crying is normal newborn behaviour – it’s how they communicate hunger, fear, tiredness and many other things.

“Babies usually start to become more alert by week three and may spend more time awake during the day. It’s a good time to start giving him “tummy time” which helps with development by strengthening his neck and upper back muscles. A couple of minutes after each nappy change is a good idea.“

Oliver’s mum, Carly:
“Oliver is really starting to become more alert when awake, focusing for longer periods and looking at us when we talk. He is also giving us smiles and cooing – it’s so special! He is becoming his own little self.

“He still sleeps and feeds three hourly, however he did sleep five hours overnight once this week – I felt like a new woman getting that extra two hours of sleep!

“Also, we took Oliver to an osteopath to make sure his neck was fine after the birth. Everything was as it should be and Oliver was totally relaxed during the examination.” Midwife, Amy Hunt:
“For the first few weeks you are just getting to know your new baby so getting into any sort of routine can be difficult. But there are things you can do to help baby begin to know the difference between day and night. During the day keep things bright and limit sleeps by waking to feed at least three hourly. A rough guide for during the day is an hour awake to feed and play, then two hours to sleep.

“It’s a good idea to begin a bedtime routine that can include bathing, dim lights and swaddling. When he wakes to feed during the night, keep the room dark, avoid talking to him, and encourage him to go straight back to sleep.

“Between weeks four to six your LMC will hand over your care to a well-child provider such as Plunket. They will offer advice, monitor baby’s progress and address any concerns you may have.” Oliver’s mum, Carly:
“Oliver hasn’t changed much since last week. I am making sure I try to stay home in the mornings to give him a good sleep and then we head out in the afternoons – mostly so I can feel more human.

“We are really starting to get to know our Oliver and what his cries mean, as crazy as this sounds. We are really looking forward to the next five weeks to see what develops – maybe sleeping through by 10 weeks, fingers crossed!”

Midwife, Amy Hunt:
“Baby should now be engaging in eye contact, and may begin to smile when you talk to him. He may turn his head in response to sounds, and startle at loud noises. He should be able to hold his head up for longer times during tummy time.

“Some babies can be very fussy, often around the same time every day. These periods of being unsettled can last a couple of hours with baby needing lots of reassurance and cuddles. You can try walking, rocking, extra winding, and sometimes more frequent feeds. This is not uncommon and most babies outgrow this by three to four months of age.” Oliver’s mum, Carly:
“Six weeks already! It feels like a blur of broken sleep and breast feeding, but lovely and Oliver is a very settled baby.

“He is very expressive with his face these days. He even seems to recognize Sam when she pops in for our weekly photo shoot, giving her a smile if he’s in the mood.

“He has his first immunisations booked for tomorrow, which we are both a little nervous about.

“Sleeping at night? Well, the longest chunk of sleep he has allowed me at night so far is five hours. I am tired, but I just have to keep going to manage my six-year-old son’s routine, too. Morning coffee helps a lot!

“The best advice I have received came from Joan at Plunket. She helped me with latching Oliver but most importantly she encouraged me to believe in myself, even when I was having trouble and feeling emotional.

“Support from our friends and family has been amazing. Home cooked meals delivered regularly have totally got us through.

“And one word to sum up the first six weeks with our little Oliver? Blessed.”

Midwife, Amy Hunt:
“Make sure you’re getting some time for yourself each day. Do something you enjoy, taking time out for a cup of tea or a nap will help you to feel more “normal” or take baby out for a short walk in the pushchair if he enjoys it.

“Most importantly enjoy your baby. Focus on the positive things and remember that any challenges you may be having won’t last forever.”