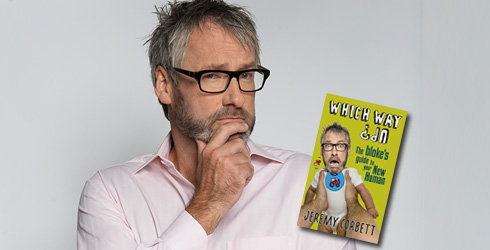 What’s so funny about babies? Kiwi comedian Jeremy Corbett comes up with a whole new set of jokes about fatherhood, baby bumps and delivery in his just-released book Which Way Up? (Penguin, $35). In true self-deprecatory style he makes the whole nine months and beyond sound hilarious. But hopefully, for the sake of his wife, not much of it is true.

The host of 7 Days is the father of two girls, a preschooler and a baby born earlier this year. He answers our questions:

OHbaby!: How is it being a dad to TWO little ones?

Jeremy: As my friend, Ben Hurley, pointed out, it's like being two solo parents. Megan is full time with newborn Billie while I'm more responsible for Charlie, which is great because we both have the mental age of a two and a half year old.

OHbaby!: How is Charlie coping with having a sibling taking much of the attention?

Jeremy: Charlie's fine. Kindercare had her looking after littlies before Billie arrived, so she's very nurturing. I'm the one jealous about the lack of attention.

OHbaby!: What is your parenting style:

Jeremy: Hopelessly manipulated by my children. From the time they were one day old.

OHbaby!: What has been both the high point, and the low point, of being a dad over the past three years?

Jeremy: As any parent will tell ya the high points happen daily. I particularly remember when Charlie started to exhibit independent creative thought. She was being chased through the house by imaginary buffalo. Awesome.

The low point is when Megan leaves me with Billie and she just cries without stopping and won't take the bottle or settle. Everything I try makes the crying louder. I can see how it drives people mad. I make sure she's dry, burped and had some food then just put her down in her cot and go listen to loud music with headphones on.

OHbaby!: What is the biggest obstacle to being a good dad in New Zealand today?

Jeremy: There should be no excuses, but having time for your kids must be hard for those who work long hours. I'm too lazy for that so we're fine.

OHbaby! If you were to describe fatherhood in a song, what would the song be?

OHbaby!: Being an older dad, does anyone ever mistake you for Grandad? And if so, what do you say?

Jeremy: Ha ha. Not yet, but it could happen. I'm in that zone. I'll probably pretend I'm hard of hearing and say, "Grandstand? I don't see no grandstand! What you young people need is a war."

OHbaby!: Can you share some of the more helpful comments you’ve received from the general public ?

Jeremy: Other parents are just so understanding and positive. Everyone seems to have a little nugget of wisdom to offer. I appreciate them all. The best is: "You should have had children earlier." So helpful.