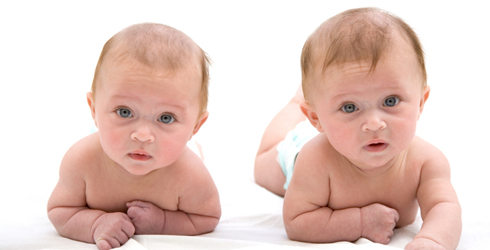 There's a rumour floating around that the best part of being pregnant with twins is that you get two babies from only one lot of morning sickness, back pain, sciatica, symphysis pubis dysfunction, sleepless nights, heartburn, and restless leg symdrome -- in other words, you get two little bundles of joy for the price of one pregnancy. If you're pregnant with triplets, that's only one third the pregnancy angst you have to face, right? Having twins or multiples isn't quite that simple, but it's an incredibly special and unique situation. Here are our picks of the best books to prepare you for life with multiples, through pregnancy and beyond.

When I was first given Twins & Multiple Births to review, I planned to give it to a friend who had twins, as I had no idea whether it was useful or not useful having not had a multiple birth myself. It must have been fate - two weeks later I found out that I was expecting twins and all of a sudden this book became like a bible.

Twins & Multiple Births covers all aspects of twins (and triplets and higher order multiples) from conception right through to adulthood. There are sections on common pregnancy complications with multiples, tips for coping with babies in NICU, ideas for dealing with sick twins, and a host of information on the relationships between twins, and understanding the way they think.

I began reading this book when I was 9 weeks pregnant. At that stage I found the sections on types of twins, twin conception and in particular Twin to Twin Transfusion Syndrome (TTTS) most useful. As my pregnancy progressed I found the book a useful resource when trying to work out what we needed to buy to be ready for our babies arrival, and for what to expect during labour and birth.

Following the arrival of our girls, I have referred to Twins & Multiple Births often - from checking out ways to tandem feed in the early days, to hearing other twin parents experiences of bonding with their babies, and understanding the relationships between their babies. There is also a very interesting chapter on adult twins, and the advice that adult twins have for parents of young multiples.

Since finding out I was pregnant with twins I have had my eye out for books about multiples and have found they are few and far between. I can't recommend Twins & Multiple Births highly enough - a must-read for all parents and parents-to-be embarking on a life with more than one baby at a time!