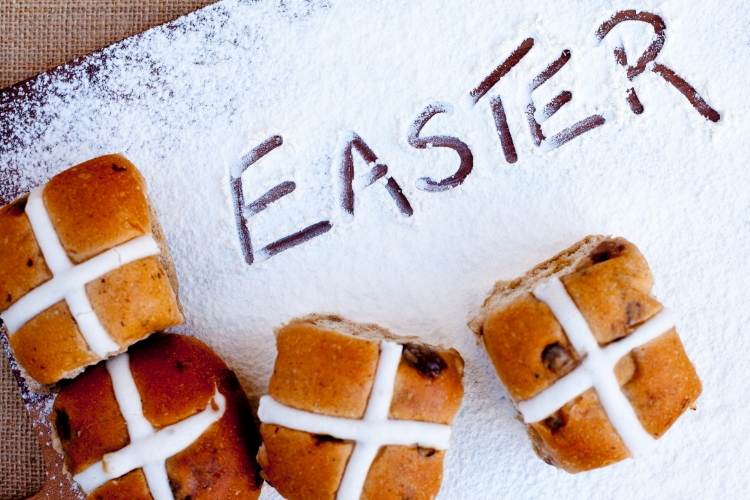 My nearly four-year-old is busy studying the latest flyer from one of the big stores, so conveniently deposited into our mailbox ever other day. This one is seasonally filled with chocolate eggs. Big ones, small ones, hollow ones, marshmallow ones, licensed ones featuring the latest cartoon star/movie star/pop star. She is dreaming, mouth almost watering. I am curious:

Hey darling, can you tell me what Easter is really about?

No, not even chocolate eggs. Do you remember what happened at the first ever Easter?

No, not quite. Jesus was born at Christmas time. He came into this world as a little baby, but he was actually God's son and God was sending him to this world because we needed a Saviour.

Why did we need a saviour?

Well, this world is pretty amazing and beautiful. But people do some dumb stuff sometimes. They hurt each other and that makes God really sad. They also forget about God and try and manage on their own. But God loves us so much, He doesn't want us to hurt each other, or ourselves, and He misses us if we just go off doing our own thing. So he came up with a plan. He would send his son Jesus to be with people on earth for a while, so they could learn more about God and the way God wants us to live. And then Jesus could take all the punishment for the wrong things people do, so us people - God's precious children, would not be separated from Him forever but could stay connected to God and one day live with Him in heaven for eternity.

Forever and ever. But back to Easter. Jesus had been living on earth for about 33 years.

Daddy is going to be 33 at his next birthday!

Yep, Daddy is nearly 33. Jesus had been working as a carpenter…

A carpenter is a builder.

Yes, a builder like Daddy. Jesus had been building, but also telling people amazing stories, and teaching them really helpful things about life, and making sick people better again, and performing miracles.

A miracle is something so amazing that only God could have made it happen.

Yep, you're a miracle. But back to Easter. People were hearing about Jesus and all the cool stuff he was doing. And some people knew he was a great leader and they wanted to follow him. But other people were afraid of Jesus. They were worried that Jesus might make trouble for the rulers, that Jesus would get people to fight against their rule and try and take over.

But you said Jesus was only doing cool stuff?

Yes, he was. He wasn't going to fight with anybody. He was doing what God had asked him to do - teach people about the kingdom of God. But the really powerful rulers felt so threatened by Jesus that they got soldiers to arrest him, saying that Jesus had broken the laws of God. He hadn't broken any laws, but by now the priests had told lies about Jesus to the Governor. The Governor didn't want Jesus killed, but people were all getting really upset and out of control, so the Governor thought Jesus had to be punished and then hopefully people would calm down again.

Did Jesus get time out?

Well, sadly not. They did a really awful thing to Jesus. They nailed him to a big wooden cross, which is really, really bad for your body, and after a while Jesus couldn't breath anymore, and he died. And we remember that day on Good Friday. We have Hot Cross Buns, and the crosses remind us what happened to Jesus that day.

Well, something really good was about to happen. And the cross thing - well, that was very, very important, because it was part of God's plan for Jesus. So it was a holy thing to happen. And another word for "holy" is "good".

Did Jesus stay on the cross?

No, his friends were allowed to come and take him down from the cross. They took his body and wrapped it up, and then they carried it to a tomb.

You mean a room?

No, a tomb… a tomb is like a cave in rock, and in those days that's where they put people when they had died. And then a big rock was rolled in front of the tomb and a guard was there keeping an eye on things.

Were his friends sad?

Yes, they were really, really sad. And they comforted each other. And then on the third day, the Sunday, some of Jesus' friends, some ladies, went up to his tomb.

To take Jesus some flowers?

Something like that. But do you know what they found? Nothing! No Jesus!! And the big huge heavy stone had been rolled away! The tomb was empty, and the guard had no idea what had happened. And then they saw a couple of angels who told them that Jesus was alive! He had come back to life, he had risen from the dead! We call that resurrection. That's why Easter Sunday is called Resurrection Sunday. The friends of Jesus were amazed, and ran back to their other friends to tell them the good news. It was hard to believe it was true, so Peter, another one of Jesus' friends came up to the tomb and all he could find were some of the bandages they had wrapped Jesus in before.
Jesus was alive, and he visited with his friends and talked to them some more before going up to Heaven to be with God.

Why did he go back to heaven?

Well, his work on earth was done.

His building work? Had he finished his house?

Not his building work, but the job God had sent him to earth to complete - Jesus had to die as punishment for our sins - the things we do wrong. Because Jesus took the punishment for us, we don't have to be punished, we can be forgiven and still stay really close to God, even though we make mistakes and do the wrong thing sometimes. But God's plan was not just Jesus dying on the cross, the most amazing part was that empty tomb. The empty tomb showed us God's amazing power - God is more powerful than death, so Jesus came back to life! God is the greatest, most powerful king and ruler EVER. And because of Jesus dying on Good Friday but then coming back to life on Resurrection Sunday, we too don't need to be afraid of dying - we can live forever with God. In fact, with God we don't need to be afraid of anything!

So… why do we have Easter eggs?

That's a good question. The hollow chocolate eggs, the ones with nothing inside, can remind us of that empty tomb… there was nothing inside the tomb because Jesus was alive!

Does Jesus know the Easter bunny?

He might do. Jesus is actually really into fun stuff, and people having a good time. The bible says he came so that we may have life, and life in abundance! That means a really fun, happy, full life! At Easter there is heaps of fun stuff around. Some things - like eggs and baby chickens represent new life, the new life we can all have because of what Jesus did. Other things are symbols of spring because in the Northern Hemisphere Easter happens at springtime. It's not Spring here in New Zealand though, its actually Autumn, but that's ok - we can still think about Spring and all the new life that happens then when animals are born and chickens hatch out of eggs…

So why does this Easter Egg here in the magazine have a picture of Dora on it?

That, my darling, I just can't really explain.

"For God so loved the world that he gave his one and only Son, that whoever believes in him shall not perish but have eternal life." John 3:16