If the housework's getting you down take comfort from research showing a bit of grubbiness is good for you.

Scientists are now telling us to beware of a sterile environment as it could be making us sick. According to the popular hygiene hypothesis, excessive cleanliness has led to a rise in allergies, asthma, eczema and hives.  But it's not just childhood ailments. Over-sanitised environments are also linked to a rise in auto-immune diseases such as type one diabetes and multiple sclerosis.  Excessive cleanliness means babies' immune systems don't get a chance to develop properly. As Dr Joel Weinstock, director of gastroenterology and hepatology at Tufts Medical Centre in Boston told the New York Times, the immune system at birth was like "an unprogrammed computer. It needs instruction".

Researchers into the hygiene hypothesis say exposing littlies to parasites, bacteria and viruses may give them greater protection later in life against auto-immune diseases. While the theory is still unproved, it's supported by studies showing a lower level of asthma and allergies among children who grow up on farms, come from large families or go into childcare early.

Antibacterial cleaning products, hand washes and detergents are in the firing line among scientists who say these products are killing off harmless bacteria and leaving us more vulnerable.

So when does clean become too clean? It's not yet time to throw in the towel on baths and hand-washing but plain old soap and water is recommended, alcohol and even bleach but not products containing chemicals such as the germ-killing triclosan.

Dishing the dirt
Two-year-old Tommy chomping down on a mouthful of dirt from the garden? Relax. It's probably doing him good. Soil has been described as "nature's multi-mineral supply" by Dr David Katz, nutrition expert at the Yale School of Medicine and a medical contributor for ABC News. It can be full of minerals such as calcium, iron and zinc, and may also help protect against toxins and parasites. 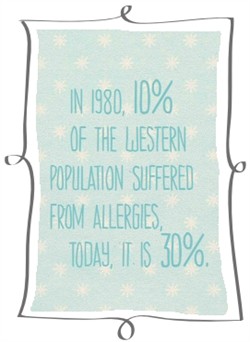 Did you know?
You don't need soap to wash your hands effectively. It's all about getting friction by rubbing your hands vigorously under running water for 20 seconds. Latest research shows rubbing hands together under water is the best way to de-contaminate hands, compared with rubbing your hands with soap or simply holding your hands under the tap.

You can make your own cleaners using baking soda, vinegar and essential oils.  Go to www.ohbaby.co.nz/lifestyle/eco-living for recipes and ideas.