Use science to decorate your baby's nursery 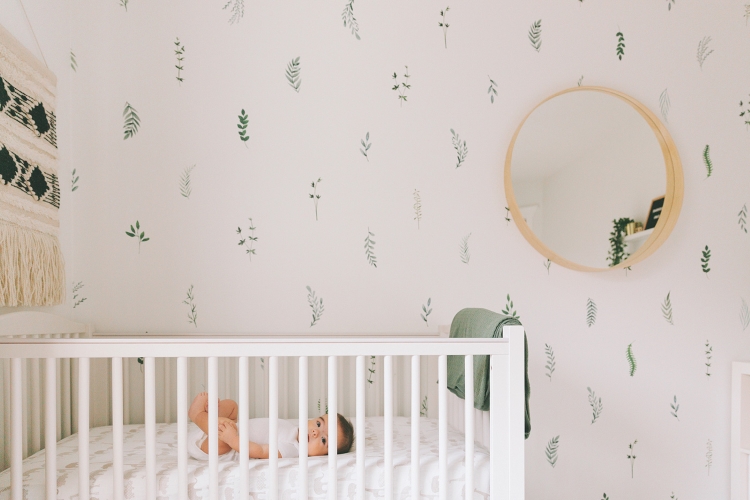 According to baby vision researchers you can enhance a child’s visual development by giving her a rich and interesting environment and tailoring it to the stage of her development.

MOBILES
Slow moving mobiles help your baby practice following objects with her eyes. You may sometimes see your very young infant stare at an object for some time before she grabs it because newborns “reach-to-grasp” machinery is primitive. But with experience from that awesome, slowly-rotating toy you hung, she will not even have to look at it as she reaches, because her vision, touch, and motor coordination machinery will have wired itself together[1]. Especially if the toy is made of narwhals or unicorn-dinosaur hybrids!

NIGHT LIGHT
Don’t worry about keeping the room too dark in the first few months. A one month-old baby needs fifty times more illumination to detect the presence of light than an adult needs. The photoreceptors in a newborn's retina haven’t developed. Even at three months, babies still need ten times as much light to see properly.

STUFF WITH SHAPES
Babies love to look at the edges of stuff. They rely on the borders of objects and high contrast areas of 2-dimensional patterns to identify things. In fact, when looking at a human face, a newborn actually looks at the hairline. In one experiment, French scientists showed four-day-old infants pictures of their mother’s face and those of strangers. This experiment was especially cool because by using photos, it eliminated the possibility that the baby was using smell or sound to as an identifier. The researchers found that the newborns looked longer at the photo of their mother than of a stranger. Researchers then put head scarves on the subjects and discovered that babies couldn’t distinguish their mum from a stranger[2]. However, once they were about two months old, they start to pay more attention to facial features. So older infants are not fooled by such minor alterations in their mother's appearance.

The lesson here? If you want your newborn to recognise you – no head scarves, fake beards, rubber noses, etc. But you should choose edgy nursery decor with patterns and shapes that have distinct edges for them to inspect.

BABIES DEVELOP THEIR VISION THROUGH EXPERIENCE
The brain’s pre-wired visual pathways need exposure to light and moving objects to create the complex sense that we call vision. What babies “see” is very different from what parents see. We take for granted that we can synthesise colour and the movement of objects to keep track of what is around us. Babies on the other hand are very nearsighted and they don’t always see something if it is moving too quickly. Researchers say babies have a visual “speed limit”. So, newborns need to experience seeing stuff to become less nearsighted, and be able to see moving objects for their brains to learn the very complex task of combining colour, movement, and timing into a single object.

COLOUR PALETTE
A newborn’s eyes are relatively insensitive to colour. At birth, babies easily distinguish high contrast colours like black and white, and they are great at seeing various shades of grey. By about one week old, they can perceive some colours—red, orange, yellow and green. But it takes a full five months before they can see subtle differences between orange and red-orange for example, and before they can see blue and violet or pastel colors. So, although colour is somewhat irrelevant to your newborn, hanging a vividly coloured picture in the nursery will eventually give them a chance to inspect subtle colours.

MINIMALIST OR EXTRAVAGANT?
Whether surrounded by white walls and minimalist art, or an over-the-top enchanted forest decor, your baby will filter the amount of information streaming into his senses to optimise his learning on his own. Researchers call this the 'Goldilocks Effect', in which babies ignore scenes that are too simple or too complex, concentrating on those that are just right. This effect is surprising, because you’d expect that babies would be more interested in the most complex scenes.

In a key study[3] demonstrating the Goldilocks Effect, researchers showed babies video animations of objects such as a pacifier or ball being revealed from behind colourful boxes. Over dozens of trials, they varied where and when the objects would appear.

They tracked the babies’ gaze, and as they expected, the babies lost interest when the video became too predictable. But to the researchers’ surprise, the babies’ attention also diverted from the screen when the events became too surprising—random and unpredictable. The researchers concluded that babies can “decide” when their learning time is being wasted by too-simple or too-complex scenes.

This finding doesn’t mean you should try to tailor your baby’s environment to be “just right,” the researchers say, just give them an interesting and stimulating environment, and they’ll decide what to pay attention to and what to ignore.