Anchors away! A nautical party fit for your little sailor 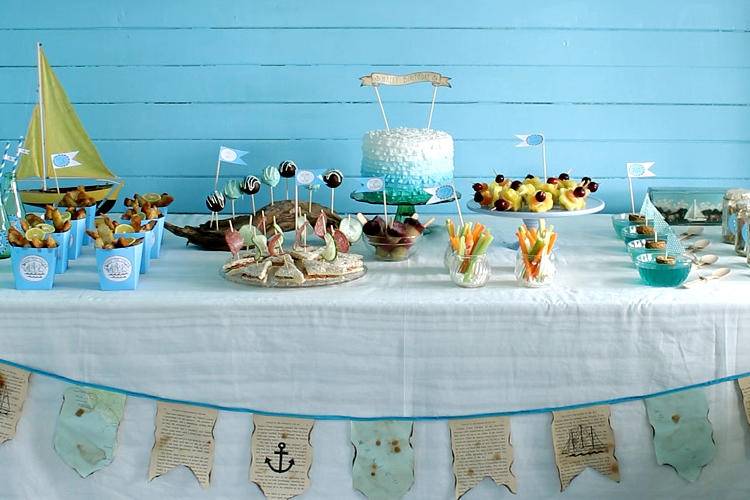 Anchors away for a seafaring party with lashing of fizz and fun adventures.

There's a timeless appeal to nautical parties, evoking as they do a strong sense of the storybook mystery of sailors, pirates and brave, seafaring adventurers. This sailors' party, styled by Stella Rutherford, has all the ingredients for a perfect lazy summer day - hot chips, cold fizzy drinks and water play.
Stella, an illustrator and craftmaker, wanted to give the party a nostalgic Ancient Mariner feel and a vintage style. She started with the invites, using the "traditional" method of ageing paper (soaking it in instant coffee), and that became a design element throughout.
The party was easy and inexpensive to put together, and with a bit of creativity, and some printables, she and her team of equally crafty and clever friends did most of it themselves.
Advertise with OHbaby!
Advertise with OHbaby! Party favours
Jam jars were used as favour containers which were labelled "flotsam and jetsam" and partly filled with sand. The favours including lollipops repackaged with themed labels, printable colouring-in sheets, colouring pencils and removable anchor tattoos sourced from pepper ink, were propped up in the sand. The jars were then sealed with aged maps which were tied on with natural twine. Party games
The party guests enjoyed sailing walnut boats in an old copper, then dug for "hidden treasures in a bottle". recycled bottles, each containing a number, were hidden in a copper filled with sand. the children took turns to dig up the bottles and the number in each bottle corresponded to a small prize.

For the party finale, the guests headed down to the beach where they hunted for their own beach treasures, collecting them into little loot bags to take home. party guests could also enjoy activities such as stringing shells together to make necklaces or mobiles, and decorating their own walnut boats. Party invites
To set the scene, "message in a bottle" invites were hand-delivered a few weeks before the party, using recycled glass bottles. The party message was written on the "aged" paper, using a smattering of sailor speak. Guests were invited to come wearing something with a nautical twist. The invite also included an old-fashioned treasure map, with an X to mark the spot of the party location. Food and drink
The "nautical" food included sailboat sandwiches, complete with a salami or cucumber sail and a toothpick mast that held the sandwich together. Walnut shell boats with blue paper masts held up by cheese (alternatively you could use plasticine or wax), floated in a sea of blue jelly.

The home-made fish and chips were presented in home-made cartons, and carrot and celery sticks were served in small glass jars alongside hummus dip. Driftwood with small holes drilled in it created a stand for the blue and brown cake pops made from cooked cake mix pressed into balls and covered in royal icing.

The layered vanilla birthday cake was first covered in butter-cream icing. fondant was used to create wave-like icing in graduated colour. even the fruit kebabs had a creative touch, with the fruit cut into shapes with cookie cutters.

The thirsty guests were refreshed with "buccaneer's brew" - soda water with a squeeze of lemon served in recycled bottles, with blue and white straws. later in the afternoon, the children all cooled off with a home-made feijoa and blueberry juice popsicle. Decorations
A friend's bach proved the perfect venue for the party, with a view out to sea, large wrap-around decks to play on and even ocean-blue walls inside that fitted beautifully with the blue and green colour palette. Conveniently, the bach already had a nautically themed décor, with an oar on the wall, framed maps and even a ship in a bottle on the mantelpiece.

The table was draped in white and its front was decorated with bunting made from the pages of books and maps that had all been "aged".

Painted cardboard seagulls swooped and dived from the ceiling above the table and a model sailing ship, driftwood and old bottles added to the rustic effect. You can download the free template for the seagulls from Stella's website, www.verydarkhorse.blogspot.com.

Sailing ships, anchors, rope and flags were used as recurring motifs for all paper and cardboard decorations with a colour template of blue, black and white. Anchors were drawn on the wooden cutlery sets with fine-pointed marker pens and little paper tabs with anchor images were attached to the blue and white striped straws.

Stella created the labels for the fish and chips cartons, lemonade bottles and party favour jars. You can purchase the printables from her online Felt craft store, www.felt.co.nz/shop/verydarkhorse.

Blue and green plates and platters displayed the party food, which was labelled with ship flags attached to kebab sticks. The top of the cake was decorated with a "Happy Birthday" banner made from "aged" card and held up with kebab sticks.