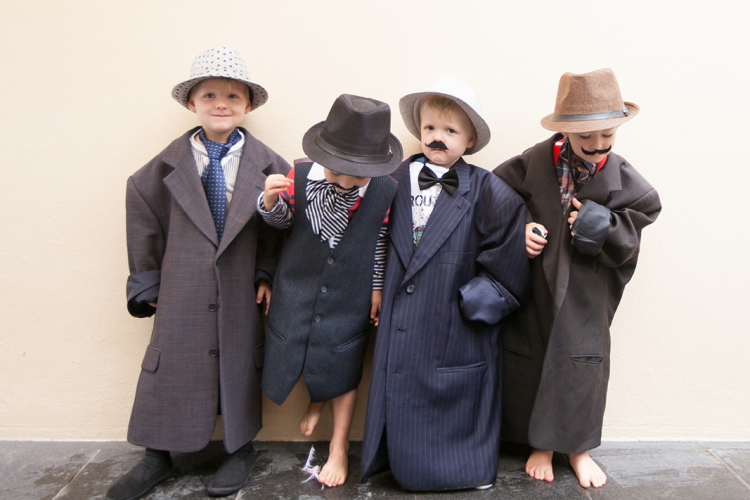 High heels, handbags and over-sized suits are de rigeur at this delightful celebration of dressing up.

Set the scene
The allure of fashion and fancy is timeless. When photographer Nadine Canestri set out to do something special for her daughter Atlanta’s fourth birthday she settled on a theme based around the popular pastime of dressing up. After months of collecting and with impeccable attention to detail, Nadine put together a party that captured charm, flamboyance and whimsy all at once. Pink and teal tied together the colour scheme. Vintage finds became decorative props and giant pom poms and birdcages added the final whimsical touch. The overall look was enchanting and inviting — a dressing table laden with hats and jewellery and a rustic-looking clothes rack weighed down with fabulous garments awaiting a whole bunch of excited children. Fun and games
This party is all about the clothes and putting together outfits which will keep guests occupied for quite a while. Wonderfully, this means there is less need for loads of activities. Make sure you have enough of everything, including shoes and accessories, to control negotiations over who gets what. Stage a fashion parade once guests have worked out their outfits and conduct a photo shoot to capture the look. You could even print images ready to be taken home as a sweet souvenir for the guests. After the fashion parade, Atlanta and her friends burned off leftover energy with a handbag-shaped piñata. The impressive menu was all home-made by Nadine and her mum. Custard and jelly were served in old baby food jars, their rims dipped in egg white and then jelly crystals to give them a pretty edge. Ham and cheese sandwiches were served in the shape of shoes and handbags. The vanilla cupcakes all boasted dress-up cupcake toppers, crafted by Nadine. She used tiny party dresses and miniature suits cut out of card and then decorated with fabric and ribbon. Oreo cake pops were also served, alongside iced shortbread on sticks shaped in the trademark handbags, dresses and shoes. Then there was the popcorn (tossed in sugar syrup and a touch of food colouring to make it pink), chips, jars of lollies, giant lollipops, macaroons and candy floss rolled into balls. The centre piece — the ruffle doll cake — was made using the Vanilla Rainbow Cake recipe from the Bluebells Cakery cook book. One of Atlanta’s dolls stole the show, elegantly posing in the middle of the birthday cake. Nadine used simple brown paper bags for party favours but added some glamour by attaching a doily to each one with little wooden pegs (the doilies and pegs were sourced from Typo). Before they headed home, guests were invited to fill their own little lolly bags — a thrilling treat for the kids and quite handy as a way of reducing the temptation of leftovers! Dress-up party favour bags could also include costume jewellery, nail polish, stick-on moustaches, bow ties and fancy dress stickers, all readily available from your local $2 shop.

Top tips
This need not be an expensive party to put together. Most of the items used were either second-hand or from discount shops. Keep an eye on TradeMe for furniture and accessories that you can upcycle and put to good use as party props — many pieces will remain useful year after year. Nadine’s best advice is: “Start collecting for this party quite a few months in advance! Atlanta and I had a great time browsing second-hand shops on Saturday mornings, having craft afternoons making the cupcake toppers and dressing the drink bottles and baking all the food together with my mum. The whole party planning process was an exciting experience for Atlanta and a great way for her and I to spend some quality time together.”