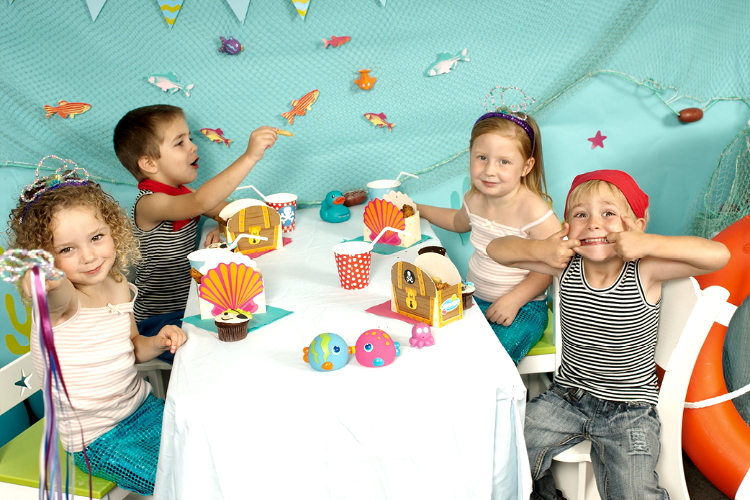 Under-the-sea is a great birthday party theme for both boys and girls. Girls can be the wonderful mermaids they dream of and boys can act up as pirates, demanding guests walk the plank!

Costumes can be as elaborate or as simple as you like. Our little mermaids wore gorgeous sequin and tulle tails from Daisy Baby, accessorised with crowns and wands. Some simple jeans, a striped top and a red handkerchief was all it took to turn our boys into pirates. Invitations
Most party stores cater for the "under-the-sea" theme, so it's not difficult to find cute and stylish mermaid or pirate-decorated party invitations.

If you are more creatively inclined you could make your own. Stain paper with cold tea bags, wait for the paper to dry and draw your own route to the "treasure" aka the party venue. You can carefully burn the edges to give it an authentic look. Another alternative is to make invitations in the shape of fish, starfish or shells, perhaps with some shells and other embellishments glued on. Or how about sending the invite as a message-in-the-bottle? Party Colours
We indulged in bright vibrant colours for our party. The bright bath toy sea creatures, food and plates really stood out against the blue background of the wall, tablecloth, net and bunting. We decorated the party area with a fishing net, life-saver ring, removable fish and coral stickers on the wall. Birthday Party Games
There are many fun games to enjoy at an under-the-sea party. Our guests loved catching bubbles and fishing bath creatures out of a bucket with a net.

Treasure hunts are always a hit. For younger guests cut out two copies each of an assortment of sea shapes on coloured card. Give one to the guest, and hide the matching shape somewhere around the house. It is good to set some parameters for the search, for instance it's not in the toilet, or master bedroom, so don't look there.

Try this fishing game for older kids. Take a length of string and hang other pieces of string from it at intervals with chocolate fish attached with paperclips. The aim is to bite the fish, with your hands tied behind your back (you will need to be careful - a hook in the mouth is not a happy end to a party!).

Kids love it when adults play the fool, so hire the man of the house a pirate costume and get him to play captain. He can draw prizes out of a treasure chest. You could mix it up a little with some treats and some tricks, such as old underpants. The sillier, the better. Birthday Party Food
Fish and chips may not be the healthiest option, but if you're picking those with the Heart Foundation tick and cooking them in the oven. It's a quick and easy treat for the kids.

Our guests also enjoyed pirate-decorated cupcakes, a delicious mermaid chocolate cake and some cute jellies. You could source some soft jube fish to put in the jellies before they set to make them look like fish bowls. LITTLE MERMAIDS
These mythical creatures - half woman, half-fish - have long held a fascination for humans. Perhaps the most famous one is found in Hans Christian Andersen's fairytale The Little Mermaid (1836). Translated into many languages, Andersen's tale tells of a young mermaid who trades her voice for human form in her quest to win the love of a handsome prince.

Andersen's portrayal of mermaids has arguably become the standard, and has influenced most modern Western depictions of mermaids since its publication. The story has been retold in numerous adaptations, the most famous of which is the 1989 Disney animated movie of the same name, where, unlike the original, Ariel, the Little Mermaid lives happily ever after with her prince. In fact the film has been such a hit for Disney, it's spawned a sequel, a prequel, a TV series and a stage musical. LITTLE PIRATES
Through the ages, pirates have been all too real, and a menace on the high seas. But thanks again to literature and films (Captain Hook in Peter Pan, The Wiggles' Captain Feathersword, Pirates of the Caribbean's Jack Sparrow) pirates have become rather exciting and colourful creatures, aided by traditionally sinister attire such as eye patches, hooks, wooden legs, and the skull and crossbones image. It's enough to send a shiver down the spine! To get you into the mood go to www.talklikeapirate.com, a website that celebrates pirate speak annually (September 19) when you can "unleash your inner buccaneer", brought to you by Ol' Chumbucket and Cap'n Slappy. So make sure it's yo ho ho and a bottle of yummy and healthy organic juice, maties, when the kids arrive to party "under the sea". Check out our other party theme ideas, games, invitations and resources.