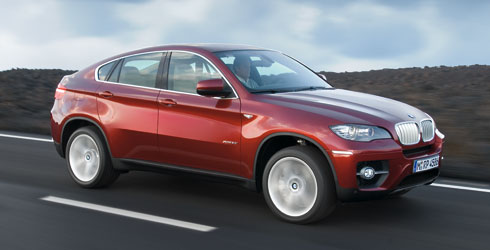 With Father's Day coming up, it's time to check out a car for dads - the BMWX6 xDrive50i. Dr Anil Sharma and his wife, Dr Rachel Jones, take to the road.

What he says
The first thing that strikes you when you see the BMW X6 face-to-face is what little justice the photos do to it. The images I had seen had prepared me for an Austin Allegro on steroids. My first in-the-flesh impressions were very different, indeed.

The on-road presence is astounding, and the X6 exudes exclusivity. It looks like a four-door sports coupe grafted onto a 4WD chassis. BMW would do well to put an average-sized human in their promotional photos to give a true sense of the size of the beast.

The current choice is between a 3L twin-turbo diesel and a 4.4L V8 fuel injected, twin-turbo petrol engine. We test-drove the top-of-the range 4.4L V8 twin turbo with 407 bhp and an unbelievable 0-100 km/h in 5.4 seconds. It's marketed as the BMW X6 xDrive50i, as the drive characteristics compare with 5L engines

.
After getting used to the supercar-width in Ponsonby's narrow streets, I realised just how useful it was to have the car's speed projected onto the lower part of the driver's side windscreen. The acceleration is breathtaking, with the gawping faces of other drivers turning from pleasant surprise to disbelief. Despite the worst of Auckland's rains, our Saturday morning trip with the kids was handled with ease, and the older two settled into the benchmark firm-but-comfortable BMW seats. They loved the rear mid-seat console and armrest, and thought that the shark fin rooftop aerial was "cool". This isn't a word that comes easily when writing about the X6. No, not "cool" - this car has real presence.

Sure, you can't ignore its size and street appeal, but it's what happens when you get moving that puts your grin into overdrive. Once it shifts, it is easy to forget that it weighs two tonnes. If it was a rugby player, it would be Jonah Lomu.

The most surprising thing for me was how my eco-sympathies and disdain for "Remuera Tractors" dissipated the moment I pressed the start button and heard the siren call of the roaring V8. The gadgetry of the doors unlocking when you get close with the keys, and the car's start/stop button working when the key was somewhere inside the car, will impress most "boys".

The car is also a comfortable cruiser for long trips, despite the sports suspension. The sloping roofline limits headroom and rear vision, but does give it a more attractive rear-end and profile.

Another surprise was the handling. There was a little roll, but overall, the centre of gravity felt low, not high, and both road-holding and traction were superb. It is an agile, responsive machine with active steering, and the xDrive distributes power between the front and rear axles. To assist with cornering, it is fitted with "Dynamic Performance Control", which directs power between the rear wheels to the one with the most grip. The 6-speed automatic gearbox is a delight, and can be controlled from the funky central joystick or steering wheel paddles. The "Adaptive Drive" system enables adjustments to the anti-roll bar motors, and the dampers and a button allow the choice between a sporting or comfortable drive.

The fittings are teutonically apt, with understated luxury, form, and functionality rather than bling. The boot space is huge, and this is aided by the lack of a spare tyre, since the X6 has run-flat tyres. The doors do close with a satisfying sound, but gently bringing them in initiates automatic closure which is fun to share with friends - and will also stop certain relatives from "smash-closing" the doors.

The standard equipment is not insubstantial, and details are readily available on the web. My favourite was the multitude of electrically operated seat adjustments to make me one with the car, and the LED projection of the satellite navigation directions onto the lower windscreen on the driver's side.
Fuel consumption is quoted as (combined cycle) 9L/100km and 13.8L/100km for the diesel and petrol versions respectively.

To summarise, this would be a great second car (the people-mover, of course, being the first!) and I suspect it has been designed to compete against the other cars that blokes drool after - namely, two-door coupes and sports cars. The X6 is not as sleek or cool as these, but is definitely more functional and more than holds it own in performance. Aside from the price tag ($139,000 to $175,000), the only other restriction is the lack of a fifth seat. What she says
I've never understood the psychology between boys and their toys, but test-driving BMW's range-topping X6 xDrive 50i has finally given me a little more insight.

BMW fanfares this titan as the world's first sports activity coupe, combining the high driving position of a 4x4 with the sporty design of a coupe, and housing a mammoth V8 engine.

This drive transforms you. Initially, it's easy to feel intimidated as there's nothing even remotely feminine about this vehicle. However, after a mind-blowing 0-100 km/hr in 5.4 seconds I had morphed into the Amazon of the roadways.

Fortunately, the safety features are quite superb. There is a range of systems designed to help prevent accidents in the first place, including dynamic stability control, run flat tyres, two-stage brake lights and excellent traction control. The car has airbags in every conceivable place, crash activated headrests, a reversing camera and Isofix child seat fastenings. In the event of an accident, a central electronic brain which monitors the type and severity of a collision activates the most effective protection units, and masterminds all restraint systems.

The exterior is no design classic: Its sloping roof, while aesthetically pleasing, means interior compromises. The back cabin is cramped due to restricted headspace, and the small rear window limits vision. Two child carseats can fit neatly into the back between a smart central console with cup holders and storage. However, as a four-seater, there's obviously a limit to the number of kids this car can transport at any one time - not ideal for larger families.
Storage is not an issue - there's plenty. The cargo area is big enough for most child-associated paraphernalia, with additional space under the boot floor.

The price tag is not for the faint-hearted. At a hefty $139,000 to $175,000, you would need to think carefully about whether this car suits your family dynamics.

Overall, BMW's X6 has plenty of road presence coupled with a strong drive performance. Not quite an icon, but definitely  a boy's toy that screams success.

Dr Anil Sharma is a consultant in obstetrics and gynecology, while his wife, Dr Rachel Jones, has temporarily put her career as a GP on hold in favour of being an at-home mum to their three daughters.