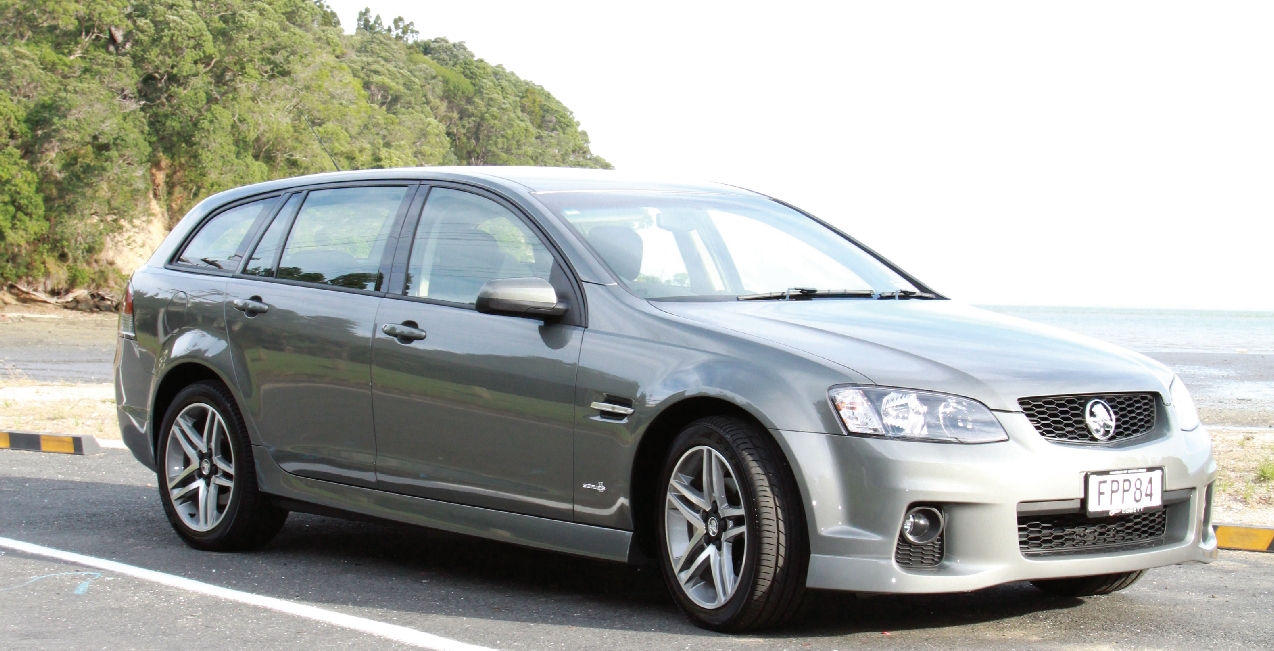 Looking for a new family car? Our husband-and-wife team, Royce and Angela Pedersen, have done the hard work on the Holden SV6. See if it measures up for you.

What he says
Finally, I have an opportunity to review  a car more suited to my style. While I love driving large SUVs that make me feel bulletproof, it's good to get back behind the wheel of a Kiwi family classic. I come from a family of six and vividly recall the 1980s and being herded into the big old Holden Kingswood where seatbelts were optional, the upholstery was orange and brown vinyl and you were ultra-cool if you got to hang out in the boot. Yes, it is somewhat of a Kiwi tradition to have a Holden parked in the driveway. Now take that classic, improve and restyle it with luxury euro-cruiser specs, intensify the refined yet aggressive trademark Holden shape, top it off by adding the word "Sport", and you have a cult classic Holden Sportwagon that every discerning Kiwi with something to lug around will truly want!

Holden released the Sportwagon more than a year after the sedan ranges, perhaps because they were trying to figure out how to make a traditionally low-profit model more profitable. They decided that for a station wagon to work, the package needed to be styled to suit the private market who are willing to pay retail, rather than reduce it to a no-frills version for cost-conscious fleet companies. For this they have been rewarded because the VE Sportwagon SV6 and SS has seen unprecedented success.

While this might not be the largest wagon around, it deserves consideration as a family wagon due to its sex appeal and added practicality over the sedan models. Once you've decided that a wagon is for you, the selection process may be tough as there are a lot of options out there - the Subaru Legacy wagon, Audi's arsenal of fire-breathing wagons, even the new BMW wagons are very nice indeed.

Having said this, I am totally convinced that Holden's range of station wagons  are the best value for money on the market for a family wanting one that ticks all the boxes and won't force you to downgrade your house.

Let's look at how the SV6 Sportwagon stacks up:
Cost: Around $55k for entry level. This compares well with its main competitors.

Look and styling: The VE pictured has been the most popular shape yet. Great-looking lines and detail - refined yet sophisticatedly aggressive with grilles and extended wheel arches. My only complaint is that its backside looks a little plump. This "plumpness" is partly due to the back door which opens almost vertically for easy access. So I guess this makes it okay.

Driver's controls: Brilliant, intuitive, well-located controls via a touch screen. You can easily and quickly do just about anything via a fairly logical menu system which allows you to make full use of multi-media, including Bluetooth for media streaming, phone paring, conversation, and anything else you could want. I also love the built-in navigation system, however it takes a while to figure it out.

Safety features: It has a five-star ancap safety rating, with full front and side curtain airbags. Lots of technology has gone into traction and road-holding in assorted conditions. ABS combined with race-proven suspension and wide rubber tyres ensure you can stop on a dime.

However it irritated me that there aren't any parking sensors at the front, as this is something I've come to rely on in my current car when squeezing into smaller-than-comfortable car parks.

Performance: Good performance in the SV6 with 195kw of power which is quite adequate for your average Kiwi family. But I felt the gearing wasn't quite right for optimal power usage.

Traction and handling: The Sportwagon has had its suspension stiffened to allow for the additional weight. While it handles very well, it does under-steer a little when pushed, mostly due to its weight.

Storage space: The VE Holden is smaller than its predecessors and the Sportwagon is no different, with up to 30% reduction in overall storage from previous models. It's still large by any means; in fact it's even large compared with other SUVs we've reviewed. Also notable is that the rear seats can be folded down to create almost two metres in length and around 2000 litres of space (895 litres with the seats in place).

Passenger space and comfort: We could easily fit three car seats across the back seat which is something we have diffculty doing in our current SUV. The seats are good quality and comfortable, with plenty of leg and head room for all.

Quality look and feel: All the materials felt solid and well put-together. Certainly, the dash console is aesthetically pleasing and practical.

Family friendliness: We didn't take the kids anywhere long enough for them to rub ice-cream into the seats or draw on the doors with felt markers, so I can't give you first-hand experience. But I can say it looks and feels right up there with the best for a cosy family car with attitude.

What she says
After driving so many SUVs for our car reviews, the first thing I noticed when I sat in the Holden SV6 was that it was a long way down. I do prefer vehicles where I sit higher in the car but, that aside, I set out to think through the pros and cons of this powerful car.

Maybe I have become a bit of a nanna since I had kids but I'm not sure I need the brute force of a V6 engine. My first impression was this is a boy's wagon to suit hubby. Sure enough, I was right!

The Holden SV6 has a strong, stable feel to it and ticks all the safety boxes.  I really liked the touch-screen system that allows you to control the music, be it from your iPod, flash drive, phone or CD. It also has its own flash drive, allowing you to save up to 15 CDs worth of music.

This screen also turns into a rear-view camera when reversing or stationary. You can choose to have a DVD feature which comes with a drop-down screen for your rear passengers (the kids!).

The touch screen has Bluetooth capabilities to make a hands-free phone call. It also lets you answer the phone using a button on the steering wheel.

With the price of fuel still rising, the Holden SV6 has been produced to be able to use bio-ethanol fuel alternatives.

Overall, the car was great, it ticked all the boxes and drove with the power you expect from a Holden. Personally, if I had a spare $57,890 (plus on-road costs) I'd buy something else. But I would be happy if hubby bought this as his family car.