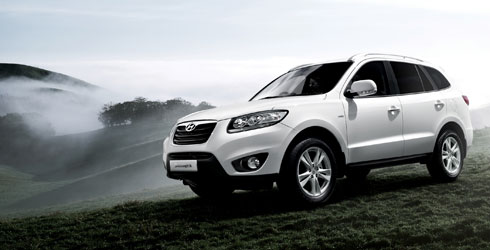 Looking for a family-friendly vehicle? Our husband-and-wife team of car enthusiasts, Royce and Angela Pedersen, check out the Hyundai Santa Fe.

What she says
When the team at Hyundai loaned us the latest Santa Fe Elite for a week, I'm quite sure neither Hyundai, nor Royce and I, anticipated the diverse ways in which we would use the car. In fact, we have introduced a new measure for testing a car - sound-proofness: The ability of a car to greatly reduce the volume of a crying child in a quiet campground at two in the morning!

Going on a camping trip means you need to be able to pack lots of gear - so much gear, in fact, that we took two cars this year (one just to fit the tent!). The Santa Fe had plenty of space to pack the rest of the luggage, lounge, kitchen, and dining gear that would be necessary for the week ahead. The car comes in five- and seven-seater options, another indicator of how spacious the back seat is. We had originally thought to take all three kids in the Santa Fe - all three of their car seats fit in easily, all with anchor points. Upon realising that I would be the one with three children in the car by myself,  I decided it be best if Royce took one in his car for "company".

The trip up was really pleasant, right from the start when I pressed the iginition button and reversed down the driveway, using what probably is my favourite gizmo in this car: The LCD screen in the rear-view mirror which allows you to see right behind the car while reversing.  I know other cars have rear-view cameras in them, but the fact that you are looking in the same place instead of two different areas was great.

Another handy feature on the drive to the campground was the space. The Santa Fe is a little bigger than the SUV  we own, so I enjoyed a kick-free ride for a change as the kids were unable to reach the back of the driver's seat with their feet! The kids also enjoyed having their own air conditioning in the pillars by the rear seats.

I enjoyed the power that the diesel turbo had when you put your foot down. Since I was the one driving long-distance for a change (Royce usually takes the wheel on long family car trips), I had to have the confidence to overtake the seemingly endless procession of trailer-and boat-towing cars, campervans, and trucks as they cruised along the motorway at 80km on their holiday journeys. Putting your foot down, there was instant power, which meant passing these queues was a total breeze. The only thing I felt slightly uneasy about was driving around corners on the rural roads. I had the confidence of knowing the car has a five-star ANCAP (Australasian New Car Assessment Program) safety rating, ESP (electronic stability program), ABS, and traction control, but I still felt cornering was a little "couchy".

Overall, I think that the Santa Fe is an attractive-looking car, the power of  the turbo in the Elite was great, the safety features that come as standard are excellent, and the space in the car (fitting three car seats in the back seat, driver seat kick-free) is fabulous. This mid-range SUV certainly ticks a lot of boxes for a good family wagon in its class, and it's safety rating provides great peace of mind for parents. What he says
The Hyundai Santa Fe,  a popular family wagon,  is long overdue for a review because of its position as one of the leading affordable SUVs on the Kiwi market. The model we test-drove was the 2.2R CRDi, Elite, six-speed automatic, seven-seater.

Hyundai have paid attention to detail throughout the Santa Fe, and while it's lacking the gadgetry I enjoy in many modern cars, it still has everything your average driver could want, including a few clever little extras such as the conversation mirror which folds down from the roof  to give you a full view of the inside of  the car. Great for surveying the carnage the McDonald's ice cream is doing to the car's leather interior at the hands of your little one!

The rear video camera is another winning concept - I like having the video display appearing on half of the rear-view mirror so that you don't have to look away to check each view.

I don't know why, however, quite a number of modern vehicles don't have parking sensors in the front bumper!  I would think this should be standard in all cars. Perhaps car manufactures don't want to insult their customers by insinuating they need "training wheels" for parking.

The rest of the interior is spacious and simple, yet stylish, with a nice amount of fake chrome to add a little zest. The "his-and-hers" climate control is a real marriage-saver. Also notable is the air-conditioned cooler box in the centre console - great for storing energy drinks and snacks on long-distance adventures.

The Santa Fe is a very practical vehicle. It tows well, has a large boot, has four-wheel drive, and boasts so many safety features and ratings that you'd think it was built by OSH.

One particular feature I got up close and personal with was the ability to use the car to sleep in, and as a sound dampener. (Yes, I need to explain!) We took the Santa Fe away on a week-long family camping trip, but our kids developed a stomach bug and were up all night, so I volunteered to bunk down in the car with my youngest daughter, allowing our fellow campers a peaceful night's rest, free from at least one child's misery. The Santa Fe stood up to this task remarkably well. We were quite cosy and less than claustrophobic thanks to the back seats, which folded down quite low, and the sizeable width of the vehicle, which allowed us to stretch out.

I was most impressed with the diesel engine, which puts out a modest 145kW, but a whopping 436Nm of torque. Torque is what pushes you back in your seat.  It's the stuff horsepower is made of, and it's sadly underrepresented in motoring these days. The turbo has quite a bit of lag, but if you are already moving, you don't really notice this, and compared to petrol vehicles it's not really that bad, as it spools up at low revs. When taking off,  if you are too vigorous with your right foot, you almost lose traction with the front wheels and feel a degree of torque-steer. This isn't really too much of an issue for the average driver, though.

The large oil companies won't be singing the Santa Fe's praises however,  as it averages 7.3L of diesel per 100km, and tests have shown usage to be as low as 5.9L per 100km on long trips. With a 70L tank, this means you'll get over 1,000km per fill! This sort of fuel economy can't be ignored. In fact, it's fast becoming the deciding factor for people choosing between the many family vehicle options available.

The handling left a little to be desired.  I felt it could have been equipped with stiffer shock absorbers to eliminate some of the unwanted movement, but the body roll wasn't too bad.

Under-steer and over-steer weren't too much of a problem due to the electronic stability control and the soft compound tyres which grabbed the road well.

I highly recommend that anyone buying a Santa Fe select a wheel upgrade package. These will not only transform the appearance of the very average-looking standard wheels, but also improve the handling, as they are considerably larger and will have a lower-profile tyre.

All up, the Hyundai Santa Fe is good to drive and great for families.