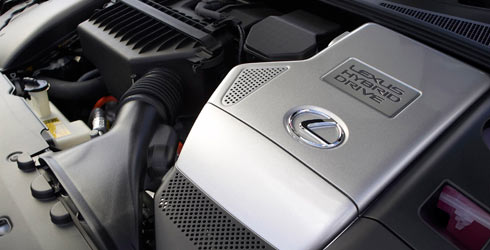 Looking for a family-friendly vehicle? Our husband-and-wife team of car enthusiasts, Royce and Angela Pedersen, put the Lexus RX400h through its paces. What he says
Since this is our "green" issue, it's only logical that we review an eco-friendly family wagon and critique its family friendliness as well as it's ability to preserve this wonderful world we live in.

The Lexus RX400h seemed the appropriate choice for this task, as it's the largest hybrid family vehicle that I know of and, at a glance, certainly seems to it our eco-conscious criteria.

Knowing that Lexus is a division of Toyota had caused me to assume that the Lexus brand was positioned only slightly above mid-market. But having now experienced one, I can testify to its ranking among the best SUVs available. The first thing that struck me was the weight and solid feel of every part of the vehicle. It felt very tight and well-constructed, giving me high expectations for how it might drive.

The Lexus RX400h was quite surreal to drive. One very cool feature is that, as you drive along, the engine starts and stops as it pleases, depending on how much power is required. The driver is generally unaware of this because the engine is so incredibly quiet! Some other contributing factors include its considerable weight, sensitive steering, soft suspension, consistent power delivery, and a strange sensation when braking. I definitely knew I was driving something unique and possibly ground-breaking. Braking was excellent. However, the braking sensation was strange in that you could feel more was going on than just brake-pads against rotors - you could sense it spinning the motors and charging the batteries. I had read that the RX400h boasts over 200kw of power, which is respectable by any standard and dispels any myths that hybrids are gutless.  The power delivery was remarkable, with loads of torque thanks to the combination of petrol and electric power delivered from two electric motors and a 3.3 litre V6 petrol motor. My only complaint is that the handling wasn't great. I felt that for the amount of power this vehicle had, it just didn't sit right on the road, and it wallowed into corners. I guess this is what some people call "luxury" - a car built for a smooth, comfortable ride, which is exactly what you get. Its over-two-tonne weight is partly to blame, with the "hybrid" batteries being the likely culprit. The drive-train is all-wheel-drive, but I doubt many Lexus owners would find themselves off-road except in the case of the odd parking mishap!

The other thing that really impressed me about the RX400h was the touch-screen control panel. It allows you to customise every conceivable setting, and get all sorts of information, such as trip stats, service intervals, diagnostics, and engine details, such as how much work the electric motors are doing, and how much power is being generated and used. The RX400h was also equipped with a quality reversing camera, GPS navigation, and an eight-speaker stereo system. The dashboard looks very attractive and, rather than using the traditional tachometer, Lexus have used a kilowatt gauge which simply shows you how much of the 200kw of power you are using. How many Lexus drivers would care about the RPM they are doing, anyway?

With so much time and attention devoted to quality and luxury, I feel it's a shame they didn't come up with more of  a stunning shape. In my opinion, the look of the Lexus RX400h doesn't do it justice and certainly doesn't turn any heads.

What she says
Having familiarised myself with the luxurious Lexus RX400h, I loaded the girls in and went for a drive. As we took off up the road, my three-year-old, Ella, exclaimed, "Mummy, if you drive too fast, you'll go to jail!" No, I wasn't speeding - I think it's more the case that she's heard this being told to Daddy a few times!

When I first turned the car on, I didn't hear a thing. It was a little odd, yet also quite nice to think that my car wasn't expelling exhaust fumes from the moment it started. I felt "clean and green" until I remembered this is also a petrol car and, at some stage, those exhaust fumes will kick in (I refused to even think about the carbon footprint it already has from its manufacture and transportation to New Zealand - but the same can be said for most cars).

The interior of the car looks good and is spacious, with plenty of leg room for front and rear seats. The boot space was, however, a little lacking. So much of the valuable space was taken up underneath the floor for the spare tyre, tools, and emergency kits. I couldn't help thinking this was taking up important shopping bag and stroller space.

Safety was definitely something on the minds of the designers of this vehicle - which will please us mothers. The RX400h boasts nine airbags and all sorts of computerised ride management features. And with the number of acronymic features such as ABS, EBD, BA, TRC, VSC, VDiM (describing the braking system alone), you could be left wondering whether car manufacturers compete to have the most abbreviations to describe their car. As with most new family vehicles, the RX400h is also well-equipped with quality fastenings and latches for carseats.

The car does exude luxury; the highlights for me were starting the car, the GPS navigation system that gives you directions for your required destination (word of advice: Enter the details before hubby starts driving, as he's not going to ask for directions), the reversing camera, and the heated leather seats.

Finally, you may be wondering about the "tree-hug" factor of the hybrid Lexus. The Lexus RX400h boasts a fuel-economy performance of 8.1litres/100km, which wasn't quite what I got out of it, having achieved 10litres/100km around the city.  So from a fuel economy perspective, today's modern diesels would give this hybrid car a good run for its money. Being a hybrid certainly does differentiate the RX400h from its rivals; however, buying an SUV is not a very "green" thing to do, regardless of which model you buy. The thing that really sets the RX400h apart from the rest is its reduced emissions - around 192g/km, which, over the lifetime of the vehicle, is what really stockpiles you some carbon credits. Well… Almost.

Royce and Angela Pedersen are parents of two daughters,  Ella and Eva. Angela is OHbaby!'s Managing Director and Publisher of OHbaby! Magazine.