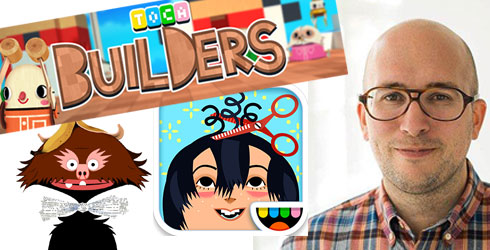 We were lucky enough to grab five minutes with Bjorn Jeffery, the CEO of Toca Boca, one of our all time favourite app developers for kids. If your kids are allowed a turn on “Mummy’s phone,” then I bet you’ve likely downloaded a Toca Boca app or three.

There’s the Toca Hair Salon where kids can cut, colour, comb and blow-dry six cute characters’ hair; Toca Kitchen which actually encourages kids to play with their food; and the recently released Toca Builders, which I’d describe as a little person’s version of Minecraft.

Toca Builders $1.99 from the App Store

Here's what Bjorn had to tell us:

How long as Toca Boca been around, and what was the original inspiration for the company?

Toca Boca started in Stockholm in the autumn of 2010 with some research that my co-founder, Emil Ovemar, and I were doing. We had been working with an R&D project regarding the future of magazines on iPads. That in turn led us to looking at how families were using this new device, and in turn how kids started to play with them. We saw potential but thought that the apps that were available weren't addressing all of the ways that kids play. That's where the inspiration of making digital toys came from.

What are the key principles that you demand of each of your apps? What do they need to do to appeal to both kids and parents?

Firstly, they are all digital toys as opposed to games. That means you can't win and you can't lose with apps. Also, there's no high-scores, levels or stress - it's just free play. That is important to us. Secondly, we make apps for kids - not specifically for girls or boys. Thirdly, we don't have third party ads or in-app purchases which is appealing to many parents. You don't want to take the risk of getting a big bill after lending your device to kids, so that's why we chose to make the apps that way.

Why do you think the Toca range of apps have been so successful?

I think both parents and kids notice that there is a lot of love and passion that goes into making the apps. They are well designed and thoroughly play tested to ensure that kids really love them. Finding what kids really like and then doubling down on that is a winning strategy.

Do you trial your apps on kids before you make them live?

We test very extensively during the whole development process - all the way from paper prototypes to the finished app. We go to local preschools in Stockholm and try to get a variety of kids - both in age, gender and experience with technology. We're looking for the sparkle in their eyes - if something really works and is fun. And to make sure that everything is simply enough to use, of course.

Where do you see apps fitting with regards to providing education/entertainment for young children?

I think there is a time and place for both. The devices lend themselves to pretty much anything that you want to use them for, and should be treated as such. I think the parents know best what their kids need to develop and can balance the two depending on that. And of course - the two aren't mutually exclusive either.

Who’s endorsement means the most to you – kids, parents, tech-bods, or educators?

We care about all of them of course, but first and foremost we make apps for kids. So their opinion will always be the most important. We've had apps where parents liked the concept, but the kids didn't. And due to that, we cancelled the project. In this area - the kids are the real experts!

Will we see a brand extension of the apps? Toys perhaps?

We think we have an interesting brand that could work well in other areas too. But we're taking it slowly to try to make things as well as we're making the apps. So yes, there will be other things coming up but as a small test at first. Keep an eye out after the summer!