Tune in or turn off? 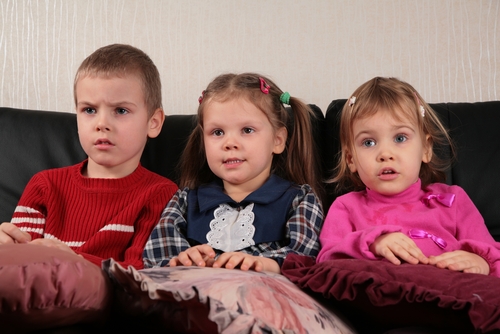 Most parents admit to plopping their child in front of the TV for half-an-hour of down-time while their little one stares, entranced, at the technicolour dream being enacted on the screen before him. But is 'educational programming' any better for children than regular old cartoons? Psychologist Pauline Ogilvy investigates.

As a parent, you are bombarded with a bewildering array of  "educational viewing choices", all claiming to have a great impact on your child's intelligence, as well as giving him a head start for school. But it's no easy feat to determine how much TV, if any, your child should watch. And is it really better if they're watching "educational" TV like Little Einsteins instead of The Simpsons? TV for little people
The content of baby-focused DVDs and videos appear different from other types of programming. They have minimal dialogue, short scenes, and disconnected pictures. The audio and visual stimuli is amazingly rich in colour, pattern, change, melody and tone, but are not usually representative of live exchanges or the typical noises and scenes a baby is likely to be surrounded by.
The rapid scene changes and audio stimulation do act like "brain candy" to a degree. But, as an excess of candy can damage one's teeth and health, can an excess of TV be damaging to a young child's brain and development? Due to this possibility, there is much critique of TV-watching for children under the age of two. Toddlers often appear to be "mesmerised" by the TV, perhaps due to the stimulation overload that children's programming can provide.

Engaging the senses
A child watching a lot of TV might have a tough time when asked to slow down and concentrate on a less visually stimulating medium, such as eating a meal or playing with blocks. Yet everyday activities make for rich, real experiences for our children - collecting mail from the letterbox; washing bath toys or plastic kitchenware in warm, soapy water; or stirring ingredients when we're baking a batch of scones. These interactions help children's speech as well as cognitive, physical, and social development.
"When one-year-olds are playing with a toy, they can explore it, poke at it, drop it," explains Yale University researcher Dorothy Singer. "They're learning about space, about sound, and they're developing a sense of competence. Watching a TV show just doesn't provide the same sensory experience."
How do children learn to entertain themselves if they can be passively entertained at such ease? If your child is watching TV, stuck in one spot, with no encouragement to point, grasp, crawl, roll, walk, run, cartwheel, or climb, they're missing out on physical activity. This activity is necessary for babies, helping them with spatial awareness, coordination, and development of muscle tone.

Think it over
A child needs to learn to think through problems, plan, and restrain their impulses. This is done through live exchanges with toys, equipment and other people, such as figuring out how to stack rings or learning how to cope when they cannot have a toy because it's being played with by another child. The relatively fast-paced scene changes in many TV programmes do not provide enough brain processing time for a child to digest the visual and audio information they are receiving - put simply, TV doesn't give children the opportunity to think things through.
Research published in 2007 showed that for every hour of TV a child watches at the age of one and three years, they had an almost 10% higher chance of developing attention problems that could be diagnosed as ADHD by age seven. This means that a toddler who watches three hours of TV every day would have a nearly 30% higher chance of having attention problems in school. These statistics should cause us to sit up take note.

Social butterfly
Social interaction is essential. Through this, children learn to communicate and get along with their peers, realise there is much to learn from others, and see that the world does not revolve around them. During toddlerhood, interactions among children typically involve them playing alongside one another and copying each other. This can mean playing in the sandpit and doing similar activities, but not playing together (parallel play).
With practice and opportunities to play with others, new skills emerge and children learn to take turns and share. Eventually, the art of cooperating and playing together with one common purpose is achieved, requiring negotiation skills and learning to compromise. The benefits of learning social skills are evident in your child's absolute thrill at playing like this with others, and their likely protest when it's time to go home! Importantly, social and communication developmental stages emerge and are achieved through this. Those children who, instead, spend much time in front of the TV miss out on this and may fail to learn these skills to the same competency level.

Monologue or dialogue?
Interactions between parents and children are beneicial for speech development and gaining a rich vocabulary, and also in learning to relate and develop social skills. The reciprocal nature of dialogue provides feedback for the child's interactions at a rate that is typical and necessary for learning effective communication. Tuned-in parents instinctively adjust their speech, eye gaze, and social signals to support language acquisition. Watching attention-getting DVDs and TV is not a fair swap for warm, social, human interaction at this very young age.
"Older kids may be different, but the youngest babies seem to learn language best from people," says Andrew Meltzoff of the University of Washington's Institute for Learning and Brain Sciences.
To add further weight to this, a study of the hours of infant DVD/video viewing and the effect on speech development showed a slowing down of vocabulary acquisition (new word learning) in 8- to 16-month-olds. For every hour of TV watched, infants and toddlers showed they understood an average of six  to eight fewer words compared with infants who did not watch TV. On the contrary, reading books and telling stories was associated with a slight increase in vocabulary acquisition.


Sleep tight
If you are having trouble establishing regular sleep patterns, or your child experiences interrupted sleep, research suggests that these issues may be related to too much TV-watching. Many bed-time routines make use of the TV to get the child settled down before sleep; however, it appears that this, particularly before bedtime, may make it more difficult for children to fall asleep.

The bright side
Fortunately, it is not all bad news for TV. Many children's educational programmes are crafted to meet the developmental needs of preschool children. It is for this age group that some selective viewing may be beneficial. A review of a 40-year study of 8,000 families says that while "shows like violent cartoons or football can make children more aggressive, we found no such effect for other programmes, such as educational ones."
The antisocial behaviours noted in this study's data included observations about children cheating, being mean to others, feeling no regret, being destructive, and exhibiting disobedience. In the study, TV programming such as cartoons like Power Rangers, Space Jam, and Spider-Man were classed as "violent entertainment" because characters fight or flee from violent situations, rejoice in violent acts, and show more violence than would be expected in the everyday life of a child.
By contrast, shows considered "non-violent" included Toy Story, The Flintstones, and Rugrats. A third category of "educational programming" was also reviewed, including shows such as such as Sesame Street, The Magic School Bus and Winnie-the-Pooh.
Positive effects of programmes like these were that imaginative play was enhanced, as well as promoting positive racial attitudes and emphasising diversity. They may also teach basic academic skills such as counting, shapes, colours, ABCs, addition, science concepts, manners, general knowledge, and social skills.
Dr Zimmerman concludes that recent studies rule out educational TV as a contributor to either aggression or attention problems among young children, saying, "Parents can take some comfort in that, especially since there is some high-quality educational programming available on TV and DVD." This suggests that by changing the channel, parents may be able to change their children's behaviour for the better.
Due to the limited hours small children are awake and primed for learning, how that time is used needs to be carefully considered. Since 2001, the American Academy of Pediatrics has recommended that children under the age of two should not watch TV at all, and advises that older children be limited to two hours a day.
Having established that some quality viewing for preschoolers and older children is not harmful and may be beneficial, you may still find TV-watching to be a battleground. Do your children always reach for the TV's "on" switch and seem addicted to passive entertainment? Be brave and begin to restrict their viewing to selected, quality programmes, or have a "screen-free holiday", where the TV is off-limits during school holidays or weekends. Remove TVs from bedrooms. Set up some guidelines, and communicate them to your children, about when the TV can be on and what they can watch.
"Everything in moderation" applies to many facets of life, including TV-watching, although additional caution is warranted when considering TV viewing for babies, toddlers, and young children. Keep in mind the fragile nature of their young, fast-developing brains and the long-term outcomes TV viewing may have. Parent interaction is most important at this age.

Pauline Ogilvy is Director of KEY Psychology (Child-Family-Education), based in Rodney and the North Shore, Auckland. Pauline is a parent of three. Visit www.keypsychology.co.nz to find out more.

Further reading
•  The Elephant in the Living Room: Make Television Work for Your Kids, by Dimitri A Christakis and Frederick J Zimmerman