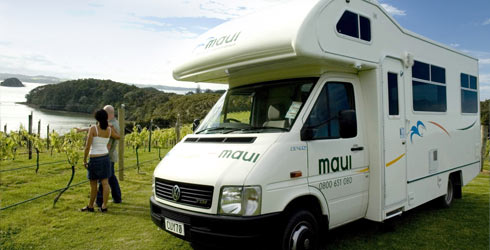 Even as a teenager, I dreamed of travelling the country in a home on wheels. Back in my carefree, pre-children days, I had visions of buying a bus with some bohemian-dressed girlfriends and hitting the road for a summer. That trip never eventuated - due, in part, to our lack of knowledge of diesel mechanics - however, the dream never faded. According to recent research, travelling the country in a motorhome is something that nearly half of all New Zealanders have considered at some stage, but haven't yet done. In my family's case, we were heading to the South Island for a reunion during the school holidays, and decided to do some camping at the same time. The idea of hiring a campervan for the trip appealed immensely, as it offered the flexibility of travel, the excitement of "roughing it", and some of the necessities and niceties of home. Finally, I was to get my campervan trip!
Queenstown airport had reopened after an unseasonal dump of snow, just in time for our plane to land. The region was carpeted in snow and provided a very picturesque backdrop for the start of our trip. Our three-year-old had never felt snow before, and chortled heartily when we stopped in a rest area to make snowballs to throw at his dad.
The moment I stepped inside our Maui four-berth vehicle, I understood why they refer to these things as "motorhomes" in all their literature. The cleverly designed interior is packed with virtually everything you could need: a microwave, fridge, stove, gas hob, toilet, shower, beds, heater, table and seats, all the crockery and cutlery a family of 4 needs… and the kitchen sink.
A quick, yet thorough, briefing on how to use the campervan, including the important "how to empty the loo" run-through (it's easy and not nearly as foul as I had imagined it would be), and we were on our way.
I enjoy driving, and sitting up high in the campervan with its big, wide windscreen was perfect for enjoying the scenery of the Central Otago region. The children enjoyed riding in the back too. They had large windows beside them as well as a clear view to the front. There were no complaints of carsickness, which has been a problem on our road journeys in the past.
The campervan fraternity is incredibly friendly. We soon got used to raising our hand to wave at each passing campervan, and it seemed that the drivers of other Maui campervans were the friendliest of the bunch when they saw us approaching with the familiar logo on our vehicle.
Our trip around Central Otago included a stay in a camping ground, as well as free camping at Department of Conservation-controlled sites, and parking at a house our extended family had rented in Glenorchy for a couple of nights. All of the overnight parking options were great and offered different advantages over each other. In addition to having power (and heating) in the camping ground, the facilities and the presence of other children and playground equipment were great.
We all loved the free camping too. There's nothing like waking up in the morning in a beautiful, remote spot, ready to tackle a local adventure. We embarked on some beautiful walks - in particular, the walk to lake Sylvan was easy and enjoyable for everyone. Our three-year-old, Harry, walked the entire way on the gentle 45-minute track to the lake. And, travelling with his cousins meant that nine-year-old Sophie and six-year-old Alice were happy to share the piggybacking of him for about 10 minutes on the 45-minute walk back. Having the campervan also meant that hot drinks and a clean toilet were available to us any time we got back from an adventure.
We were in the Central Otago region for the start of the trout-fishing season and the children had a great time learning to fish. We'd read that it takes, on average, two hours to catch a fish, but the moment Alice threw her line in, a very nice-sized trout jumped straight on the hook. It was a perfect start to the adventure for the kids and really built their enthusiasm for standing on the banks of the rivers holding their rods. Parking at the rented accommodation meant we had access to a much broader pantry than we'd stocked in our campervan, and we cooked up the two trout the kids had caught for dinner one night. The shared living area of the rented house as well as our own "bedroom" in the campervan combined the benefits of travelling with extended family and having some private space.
Our week flew by in the excitement of staying in different locations and the endless adventures in our campervan. When asked for the highlights of the trip, I thought the kids might say, "Catching a fish" or "Playing with my cousins." Their response? They all emphatically stated it was "Sleeping in the bunk up the top!" although, at times, it certainly seemed like there wasn't a lot of sleeping happening! The area above the cab of the vehicle also doubled as a "playhouse" for the children. They'd shut the curtains and hide out there for periods of time away from the adults.  Every so often, they had to be reminded that play was over and that it was time to sleep.
Despite what they said, I secretly believe that their favourite part of the campervan was actually the toilet and shower cubicle. They seemed fascinated with our "loo-on-wheels", and were often found hiding in there looking at the plumbing. The Maui Motorhome was certainly a resounding hit with the kids! Vicki Febery is OHbaby!'s former Marketing Manager and mother of three-year-old son Harrison. She has spent the past couple of months trying to undo the teachings her son learned (from his father) on their campervan trip - namely, that it's fine to be at one with nature and wee outdoors. Her embarrassment was complete at Butterly Creek a few weekends ago, when, quick as a flash, her son downed trousers and attempted to "water" the turtles. Here's hoping Harrison grows out of his naturist tendencies - fast!