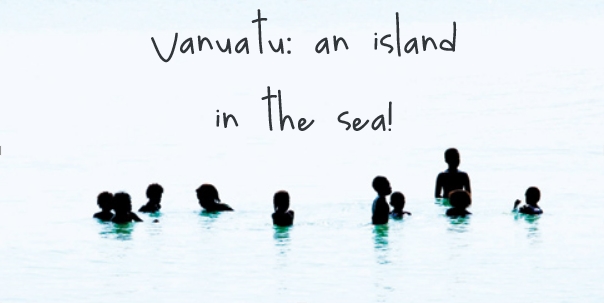 Mum-of-two and photographer Tetu Wichman celebrated her 40th birthday in Vanuatu, with a week of luxury, complete with uninsurable plane rides and an active volcano. Well ahead of time, I let it be known that I wanted to celebrate my 40th birthday on an island, piña colada in hand, and kids - mine and anyone else's - nowhere to be seen.
My husband (who deserves the title of Events Co-ordinator of the Century - he even filled out my arrival and departure cards) whisked me away to Iririki Resort, Port Vila, on Efate Island in Vanuatu, an archipelago of 83 islands. There I was treated to seven days of luxury living in a waterfront bungalow. I was wined and dined and scrubbed down with salt at the spa. I was flown to another island to meet a volcano that is active, but apparently safe (is there such a thing?). Best of all, I was allowed to just sit and enjoy my book, the view and pretty cocktails.
For those looking for action holidays, Vanuatu has it all, including bungy jumping without the bungy (check out YouTube for this particular flavour of madness that takes place annually on Pentecost Island). Events on offer that you can get insurance for include scuba diving, helicopter tours, parasailing, off-road buggy tours, sailing, snorkelling, fishing, and horse riding.
In Port Vila you can also hire a car or 4WD to trip around the island (135km round trip + almost exclusively dirt roads = 1 very long day). My husband, being Mr Adventure, wanted to hire a motorbike. I immediately thought about the 1cm-thick layer of dust that would coat my freshly salt-scrubbed skin but, having married the man, I replied, "That's a great idea", and kissed my hard-earned glow goodbye. I actually thought it would be great, but it turned out there was only one rental motorbike on the island with enough grunt for the both us and it was sitting in a workshop. Mr Adventure nearly cried.
Instead, we added a snorkelling trip to the agenda, along with catamaran sailing (though neither of us knows how to sail, which might have made that idea a recipe for divorce). In any event, I was roughed up by an uncommon cold for a couple of days, so the fish had to do without me, but I single-handedly saved our marriage. My cold left me with no energy, but who needs energy to read, slip into the resort's dreamy blue pool, eat great food (Michener Restaurant at Iririki Resort, 100m from our bungalow) and drink beer? Not me! On the second evening of my illness, I even managed to beat my husband at table tennis (the resort has a games room). He, being a man, will probably dispute that.
The hands-down highlight of the week was the trip to Tanna Island (Unity Airlines' overnight package tour, 59,900VT per person) to see its volcano. We left for the island in the morning and returned just before noon the following day. The brochure stated the flight - using a multi-engine aircraft - would take two hours and there would be an in-flight interactive commentary and refreshments on board. With five passengers, the single-engine (goodbye, insurance!) plane was full. The fight took one hour, the engine noise was so loud that if there was any commentary no one except Superman would have been able to hear it, and refreshments consisted of a drink (carton-plus-straw combo) tucked into the seat pocket. Hmm.
Dodgy beginning aside, we were greeted with real refreshments upon arriving at our accommodation, Lenakel Cove Resort. After an hour's break, we set out in a 4WD to the volcano, Mt Yasur. If you think Port Vila's roads are bad, check out Tanna's. The upside was that we had to travel slowly, which allowed us to peer into the population's (about 1,000, I was told) backyards - an intriguing and humbling experience. Life is pretty basic on Tanna. It does have schools, and people wear Western clothes and sometimes shoes, but there appear to be few jobs outside tourism. Except, that is, for that age-old job of raising your family: Growing and finding food, making sure the kids don't drown or get hopelessly lost, and ensuring you have a couple of pigs on hand to give to the in-laws-to-be come the time when a son wants to marry.
Unfortunately, we didn't stop at local villages, as the brochure promised. Maybe Jack, our driver, could no longer bear the native-gazing close-up. When asked if he liked his job, he replied, pleasantly enough, that it was boring. I admire that kind of honesty from a tourism operator.
Mt Yasur is covered in sandy ash. You can choose to climb it (about an hour's hike) or be dropped off on the other side, from which there's just a 10-minute walk to the crater. Seeing as I was becoming an expert layabout, I chose the latter.
The volcano is impressive, regularly throwing hot rock and ash up into the air, with the odd loud boom, one or two of which me made jump. At dusk it turns into a fireworks display. It's the perfect tourist volcano: It's well-behaved, entertaining, and slightly scares the tourists without killing them (not yet, anyway). Mt Ruapehu could learn a thing or two from its Melanesian counterpart. Volcano-gazing is a year-round activity which, done with restraint, need not upset the ski season.
Early the next morning I headed to the beach with my camera. I came across a dozen kids (some only a couple of years old) messing about in the water. I spotted signs of their breakfast - freshly stripped mango stones - being exported out to sea. Most preschoolers (mine for sure) would trade in their parents for this lifestyle.

Back in Port Vila, I indulged in yet another massage to "recover" from the volcano trip. Fittingly, it involved hot stones. But too many massages can make one sluggish, so I decided to do some snorkelling (a two-minute walk from our bungalow, and Iririki Resort loans out gear for free). The tourists have killed off the coral close to the shore, but a five-minute swim away there's a coral playground for tropical fish and snorkellers alike. Who needs a boat?
After seven days, my husband and I reluctantly left the island, scheming about how we could return. But after reviewing the budget, my husband told me that for my 50th birthday the closest I would get to an island was Waiheke - for a weekend. Tetu Wichman lives in Auckland and is the mum of two busy girls who keep her guessing, and the wife of Frank, her partner in wine (and guessing). Tetu spends her spare time developing her photography and searching for her daughters' AWOL socks. Her new blog is at www.wichmanphotography.blogspot.com