Is yelling the new smacking? 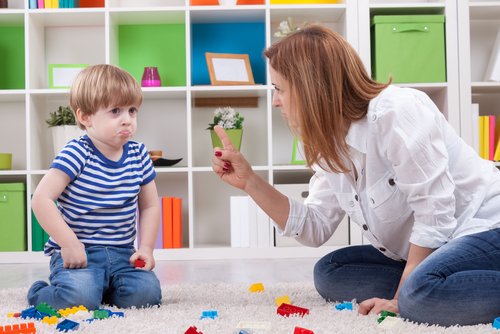 What's the alternative to yelling at the kids when you want them to do as they're told?

Parenting children at any stage can be a real challenge. From the toddler who throws a lay-flat-on-the-floor-and-cry tantrum to the brother and sister who won’t stop fighting, parents regularly navigate a wide array of situations that require dealing with unacceptable behavior. Almost all parents admit to yelling at their kids from time to time, despite many of them feeling bad about it.

So what else can we do to persuade our young ones that requests to pick up toys/get up to the table for dinner/stop throwing things need to be met?

With help from OHbaby! baby and toddler consultant Dorothy Waide, here are a few pointers to help give your vocal cords a rest:

1. Stay calm for as long as you can and speak in a low, calm voice.
2. Make eye contact with your child and state your request clearly. If you have to, repeat it then state the consequence (eg, removing the toy she's playing with). Make sure you follow through by removing the toy and putting it in a high cupboard until the task is done.
3. Consequences could also be: Turning off the TV, taking away an electronic device, taking possession of a favourite toy.
4. Ignore tantrums; If your child retaliates by throwing a tantrum, ignore it. If you have to, leave the room, but only if you know your child will be safe.
5. Get close to avoid yelling. Dorothy says, "With the younger toddler/child if I ask her to come to me and she doesn't listen the first time I tend to go over and bring her to me and then start to talk to her. This avoids the shouting match.
6. Count to three, s-l-o-w-l-y. But you need to have a back-up plan if this is not complied with.
7.  Repeat and count to three. Kneel down to your child's level, look her in the eye and repeat the request, then count to three.

For toddlers it's important to have immediate consequences rather than a threat of something that will happen in the future.

For older preschoolers add these tools to the mix:

1.  Star charts: Ideally, get one that has detachable stars so you can remove a star if your child refuses to carry out a task.
2.  A clock timer:  Three and four year olds  learn to say, "Wait! I'll do it later!" This is when you set the timer, letting your child know the consequences if the alarm rings before the job is done.
3.  Count to 10 (or 20): Many four year olds know their numbers up to 10. For ongoing disobedience, put your child in the hall and tell her to stay there until she has counted (loudly) to 10.

Look at ways to create a list of family rules, eg a Family Mission Statement. Get the kids to help you draw up the list so they have their say over whether these rules are fair or not. This way, they take ownership of the rules themselves.