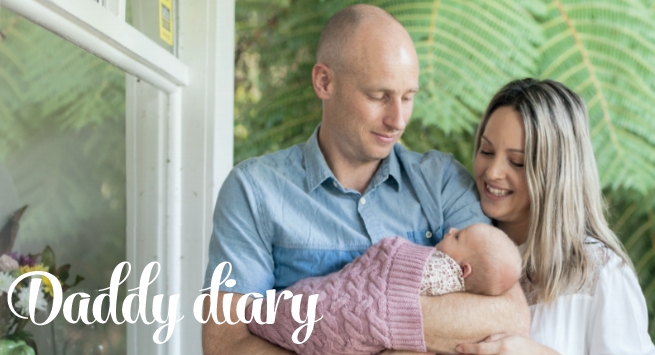 Brand new dad Sean Falconer kept a diary to record the reality of his first week of fatherhood.

day one
After 40 weeks of anticipation, not to mention the years before that, during which we had patiently waited for our first baby, an induction had been booked and today was the day. We went into hospital for the 8:00am induction. After that, nothing was really happening so I went for a run in a park near the hospital. I got back to find my wife, Marianne, wandering around the duck pond and it seemed like any other day.

I left the hospital that evening as it looked like nothing was going to happen any time soon. I dropped a friend off in the city, then planned to go home for a good night’s sleep. However, on the drive home, Marianne’s mum rang to say “Get here now and bring the Swiss ball”.

Marianne’s contractions had started at 7:15pm. In my leisurely manner, I took this instruction with a grain of salt, thinking it was my mother-in-law being over-zealous. I went home and fed the dog before heading back to the hospital. When I got to the ward, Swiss ball in tow, Marianne had already been moved to the delivery room. When I finally caught up to them, the midwife jokingly told me to put the Swiss ball back in the car. It was no longer required.

The labour was a speedy two hours which made it exciting, like a thrill ride of ups and downs, a mixture of screaming and then calm between pushing. My hand was getting a thorough crushing, yet me squeezing Marianne's hand back was not appreciated, and she made it known.

I was amazed at Marianne's tenacity and pure will. I wasn't so sure she was going to get through the labour without drugs, but I was surprised; she pushed with a determination I had never seen before.

Before I knew it, this strange blue creature was being coaxed out into the hands of the midwives, looking lifeless initially. But, within seconds, she gurgled and started to breathe. It was a flood of mixed emotions –joy but also disbelief that she was actually here. Only a few hours earlier, I'd been dropping off a friend in town, thinking this moment was going to be another day away.

When I had my first hold of our baby, I ogled over every part of her. I didn't feel a strong instant bond but more of a longing to know and discover this creature who would become my daughter.

I sent a text to my mum, with a photo of Marianne and the baby, saying "Job done". Mum couldn't believe it as we hadn't even had time to tell her that Marianne was in labour. It was a pretty proud moment for me. day two
I picked up Marianne and our new daughter, Frankie Grace, from the hospital and headed to Helensville Birthing Centre. A lot of friends had told me how nervous they were driving their baby for the first time, but for me it was an exciting prospect. I strapped her into her carseat with pride; I was stoked to be driving my newly formed family off on our first expedition. It felt so natural; we even stopped for Sal's pizza on the way!

The first day and night at the birth centre were amazing. My family visited in the afternoon, and it was such a special moment for me –presenting my daughter to my mum, dad, and clucky sisters.

This was my first night with Frankie (as Marianne had spent the first night in hospital alone), and I was nervously anticipating no sleep. But, with the help of an angel-like midwife who settled Frankie for us, we had a reasonable night’s rest. The supportive environment helped us to relax and allowed for focussed family time with lots of skin-to-skin contact with Frankie. I feel this is where the father-daughter bond really started to form. day three
The next few days blurred into one with lots of snoozing and cuddles at the birth centre. Staying there was the most amazing experience, especially with midwives on tap. It was a time of learning the ropes and falling in love with my wee daughter. day four
It was only when we left the birth centre to head home that I felt cautious. I was on alert driving home, it was as if everyone was a potential hazard. I guess the bond with my baby girl had really started to grow and I felt more protective. I was tempted to pull over half way home just to check she was still okay in her capsule. We arrived home to two doting nanas, who had cleaned the entire house and prepared food for our arrival. Marianne's siblings were also there waiting to meet their new niece. Being home seemed like the next chapter of our story. It felt natural to hibernate. It was nice to be at home and have a fresh challenge of adapting to this new way of life. It is cool seeing my wife adapt to being a mother; she is a natural and seems to have more patience for wee Frankie than she ever had for me! day five
So many friends warned us about lack of sleep with a newborn that I must have set my expectations pretty low as to the amount of rest I would actually get. It was definitely hard, but with the help of Marianne's mum (who stayed for the first week), adapting to this new life was a lot less stressful than it could have been. Nanas are amazing. We are very lucky to both have our mums around. day six
We decided it was time for Frankie to have her first shower. We'd heard babies really like showers so I thought I'd give it a go. I held on so tight her little arms started going blue! Frankie, on the other hand, was so calm and peaceful that, had it been a movie, Simon and Garfunkel’s The Sound of Silence would have been playing! day seven
We were experiencing a bit of cabin fever so we decided to venture out for our first walk around the block, and test-drive our new Mountain Buggy. I didn't really want to bump into people. However, as Murphy would have it, many friendly neighbours greeted us on our journey. To sum up my first seven days as a first-time Dad; I wouldn't change a thing. Each day was a new experience and a steep learning curve. With the new-found responsibility of being a father, I feel motivated to face the challenge, to do a good job, and be a great dad. The support we had from family and friends was invaluable. It gave us a chance to adapt and learn, without the pressure of full responsibility straight away. Big thanks to nanas, family, friends, and support crew –you know who you are.

Sean Falconer is a builder by trade and a former world-class drifter. Having previously featured in performance car magazines, this is Sean's first appearance in a baby mag. Marianne is on maternity leave from her marketing career. They have been married for seven years and, after a long wait, Frankie Grace is a much-loved addition to their family and an answer to many tears and prayers. Brand new dad Sean Falconer kept a diary to record the reality of his first week of fatherhood.