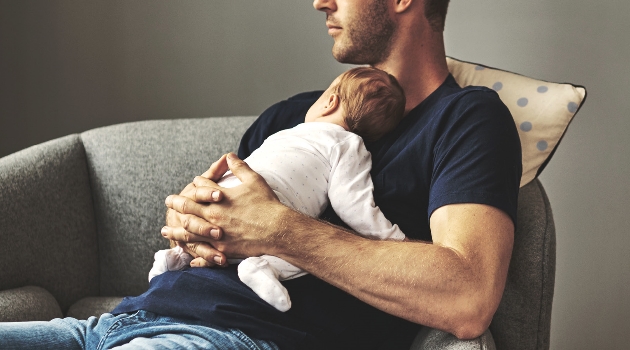 Father-of-two Oliver Driver puts pen to paper to encourage those who are just starting out.

I started writing these columns for OHbaby! before my daughter, who turns two next month, was even born. Looking back I remember how scared we were, how excited and freaked out and unsure of everything. We would walk into baby stores and be so overwhelmed by the sheer weight of things we were expected to buy that we would turn around and walk straight back out again.  Now, as our second child turns four months old, we may not be experts, but we have learned a thing or two, and I thought maybe I could share those things with you who may be back where we were, and in need of some advice.

If I had a dollar for every unused muslin or sleep-sack we have given away, I’d have enough money to buy the change table we also didn’t really need. Both our kids were changed on a shelf till they were old enough to roll over, and even then we mostly changed them on couches, floors and the bonnet of the car. We have one now that we use a lot for the toddler, but it doubles as a chest of drawers, and she will use it till she is 17 and flatting in Dunedin. The plastic change table we bought from Farmers sits cracked and broken in the garage; we used it like sixteen times. The point here is you don’t need much to begin with, and then once you have the baby home with you, the things you need become obvious because you need them. Then you can go and get them because your legs still work and all the shops haven’t shut down.

Before we had our first child, we were told by around a hundred thousand people that the love we would feel for our baby would be like an all-consuming tidal wave that would wash over us the second we looked into her eyes. It didn’t, and that kind of screwed us up for a while. To be honest we both just felt tired and scared, and a little freaked out that this thing that had been just an idea and an ultrasound was now an actual human baby that needed us to keep it alive. Our love for her was not instantaneous, and talking to lots of parents, it often isn’t. If it is for you that’s great, but if it’s not then that’s okay too. You’re going to grow to love them more than you knew you could as you get to know them and they go from being a baby to being your child. It’s okay if this takes a while.

There are so many bloody rules and it feels like all of them have been written by people who don’t have any kids. We met a woman at the hospital who told us that we should never swaddle a baby, have the baby sleep in our room for the first year, and face backwards in the car seat till the kid was two. But swaddling worked for us with the first child, and it worked again with the second, we moved both kids into their own rooms by the time they were two months old, and I turned that seat around the second I had to try and fit it and a capsule in the backseat. We have friends who have been co-sleeping till their kid is 10 months old, some puree all the food while others do baby-led weaning, some people use a dummy, and some kids never take to them – no matter how hard we blimmin’ tried. Every parent does what they do (or did, in your parents’ case) because it worked for them. If it’s working, you’re doing it right.

This is honestly the hardest thing you will do, for all sorts of reasons. The lack of sleep, the loss of freedom, the fear, the lack of sleep. Admitting to yourself and your partner how hard it is to raise a baby is perhaps the most important thing I have learned. That it’s okay to cry sometimes, or leave the baby screaming in their cot while you stand outside or walk round the garden because you’ve been trying to get them to go to sleep for an hour and you are this close to losing it. It’s okay to get angry and sad and to not want to do it anymore. This is hard, but you can do it, you will do it, wipe away the tears, breathe deep and go back in the room to pick them up and start again because they are worth it, worth everything.

This is my last column for OHbaby! I have loved sharing this wild journey we are on, but it feels like a good time to stop. I’m not a first-time dad anymore, I’m just Dad.