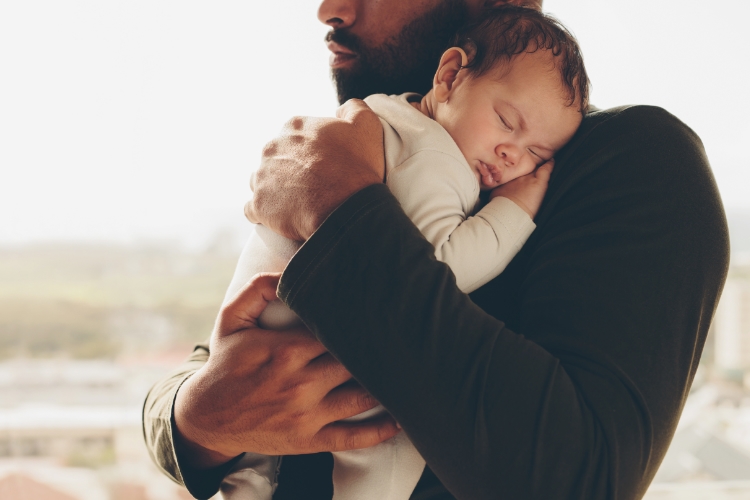 Colin Gruetzmacher’s honest reflections on the thrills and spills that are part of becoming a father.

So you’re gonna be a dad! Weird, right? I still remember feeling excited at the news, but also wondering “Who thought I was responsible enough to keep a human being alive?”.

To deal with that feeling of uncertainty, dads often end up trying to do a lot of learning. You go to antenatal classes, you read blogs. Your partner might even have shoved a copy of OHbaby! magazine into your hands, desperately hoping you’d read it and learn something, so she didn’t have to remember everything herself. At least, that’s how it happened for me, and I learned heaps of practical baby-related stuff. But the one thing I didn’t expect was how much I’d learn about myself.

I reckon being a new dad is a lot like being at boot camp. You get thrust into all kinds of situations that you never expected to be in, with little or no idea of what to do, or how to do it. And someone is usually shouting at you. Of course, new dads are also functioning on very little sleep, so it’s no surprise that all those layers you create to help yourself function as a ‘normal’ person dissolve away to reveal sides of ourselves we never knew existed. Sometimes that’s great, but sometimes it’s not.

I quickly learned to do all sorts of things I never imagined myself doing. While I wanted to be the hands-on kind of dad, I had almost no experience with babies before having my own. I’d never held a newborn, knew nothing about the feeding stuff, and had never changed a nappy. But once Leo came along, I surprised myself with how easy I found caring for him. I sussed out that floppy-head thing pretty quickly, and realised that newborns are super bendy, and fairly easy to get in and out of their clothes. I prided myself on being a better swaddler than my wife – Leo hardly ever wriggled out of mine. And I even managed all the nappies better than I expected. I knew a major change had occurred in me one day while I was changing Leo’s nappy. He’d pooped, and as I lifted up his legs to wipe him, he grunted and pulled his legs in. I looked down to see a highly pressurised stream of steaming liquid excrement, about one centimetre in diameter, shoot out from his bottom and travel over two metres across the room!

I called for back-up and wondered how it could be physically possible for a tiny human to generate that level of force. Then I heard another grunt, and some kind of primal instinct kicked in. The reptilian part of my brain knew it was my job to protect my household from threats, and I thrust my hand down to create a protective barrier. There was a second, more forceful eruption and my hand struggled to hold back the onslaught. When it finally (finally!) relented, I found myself cradling a small pool of my son’s unnervingly warm poop. But instead of being disgusted, weirded out, or depressed that my life now involved being a dam for my son’s bowel motions, I was cracking up. I was amazed that my instinct hadn’t been to pull back in horror, but to get stuck in! I’d never known that part of myself existed, and despite the circumstances, I was glad to have discovered it.

However, not everything I learned about myself has been gratifying. I’d always considered myself a pretty calm and patient person, but I was totally unprepared for what I was like under the immense pressure of parenting. Our second child, Cora, had bad colic and reflux, and would often cry for hours on end, and be utterly inconsolable. I knew my wife was already stretched, so I’d do my best to take some of the longer shifts holding Cora, but the screaming and the lack of sleep wore me down in ways that I didn’t expect. There were a couple of times when I got so frustrated while trying to settle her that I found myself gripping her so tightly I scared myself. I would catch myself wanting to shout “Be quiet!”, thinking I might just be able to shock her out of the crying. I realised that those shaken-baby cases don’t just happen to ‘problem’ people (whoever they are, anyway). I could get angry, and if I didn’t face this and manage it, someone could get hurt. That was a tough thing to learn about myself.

So all you dads-to-be, prepare to take an honest look in the mirror. Anger, selfishness, insecurities, resentment – if any of those things are lurking in there, a kid will most likely bring them to the surface. While that can be terrifying, and it’s tempting to just ignore it or bury it, by being honest with ourselves and our significant others, we become better dads, better partners and better people.

Kids bring out the best and worst in us. They help us to discover parts of ourselves that we didn’t know existed. So, new dad, get ready to learn. Learn to acknowledge your weaknesses, and how much you still have to learn. And learn to celebrate the ways your child has changed you for the better. You can do more than you thought you could. Change that nappy, plait that hair, tell those terrible jokes. Learn what it’s like to be you, rocking that dad life.

Colin Gruetzmacher is the pastor of Golden Sands Baptist Church. He lives in Tauranga with his wife and two wee children, Leo (three) and Cora (22 months), and these days he recommends having a clean nappy already under your baby before you remove the dirty one, to avoid becoming a human shield.