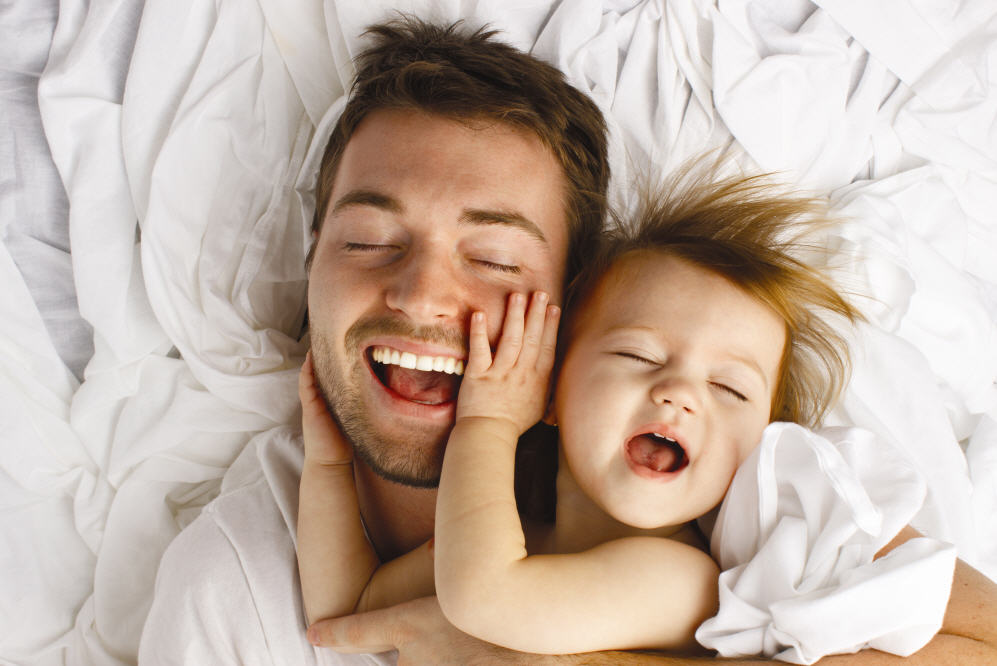 Our men have to pack up their pride, pennies and putters for another day, writes dad of two Hadyn Jones in his seven steps to fatherhood.

Parenthood runs by its own clock. Babies are conceived in an instant and often arrive in a rush nine months later. They don't wait for us to learn how to be parents. Consequently I'm still learning the steps to fatherhood so bear with me.

step one: freedom appreciation
The first step towards becoming a father is easy. I suggest you take it right now. Do it before the baby comes. Do it as often as possible in the first and second trimester. By the third your opportunity will have passed. Your partner will be frazzled, tired, over it and convinced a baby is arriving at any possible moment. The bad news is I'm not talking about practising conception.

The first step to fatherhood is savouring the life you have now while you still have it. You can do this by telling your partner you are going to fix a friend's fence. Now get in the car and drive to the nearest golf course. Once there enjoy the peace and solitude of walking among the trees as you hunt down your errant fairway drive. Revel in the banter as your buddies help you search. After four hours of hacking and slicing, have a beer. Phone your partner and tell her you will be home soon and then have another beer. This is your time, it's precious and unless you can make a living from playing golf, it's all about to end. And just before you consider it, let me say now, it's not possible to take your baby to golf. They are too loud and I've never seen a man putt successfully with a frontpack on.

There are things you should also do with your partner while you have the opportunity. These may include peaceful café brunches where the silence is broken only to negotiate a peaceful hand-over of the front section of the Sunday paper in exchange for the sports. You may want to also consider having a lie-in. And when you awake from a restful night's sleep, take a moment to soak in the peace and quiet. Then roll back over and sleep some more. Soon you will need all the rest you can get.

step two: save your pennies
If you have any spare money in your wallet, I would suggest hiding it in your sock draw or embezzling it in a remote Pacific Island enclave. This money will come in handy later on for drinking, takeaway meals, music downloads and new clothes.  All the things you and your partner currently take for granted will all be gone once she stops working and starts spending on space-age car seats with cup holders, rimu cots and miniature Nike Air sneakers for a baby that can't walk.

Initially, I thought we would still be flush with disposable income because my wife would just do some contract work in her spare time while looking after our first child. I was dreaming. Looking after a new baby is a full-time occupation with overtime demands as well. You may never be as rich as you are now so squirrel away a few extra pennies.

step three: drinking
Getting drunk soon would be best practice. In a short time outings involving alcohol will need to be planned well in advance. That after-work drink will become just that, one drink, maybe two at a push. No longer are you able to head out on the town with colleagues until all hours to celebrate the simple fact you made it through the week. There is a house-bound partner waiting for you. You are her link to the world. She will want you on the marital couch listening to how her day went.

step four: get schooled up
You may want to familiarise yourself with the mechanics of child birth. After all, it was you who kicked off the whole process, so you may want to educate yourself on how it ends. Chances are your wife will be worried about child birth and may want to confide in you. I would suggest having some handy facts and figures on hand to reassure her. Tell her the infant mortality rate in New Zealand last year was half a per cent. Comfort her with the thought she has a greater chance of being harmed in a car crash on the way to the hospital. Actually, don't tell her that. She will have enough to worry about in transit.

Once your baby's born you may want to know what sort of baby you have. They are all different and after the birth you will be back at work sooner than you think. That's why you may want to take the time to quiz your wife each night about her day. It may be boring to hear about sleep patterns, burping techniques and bowel movements but if you take this stuff in, it means you can step in at a moment's notice and have some idea of what you are doing.

I didn't really feel like a dad until my daughter was a few months old and suddenly started smiling at me. Even then I concluded I was the family's entertainment officer and not really a father. Then one day she was scared by a passing truck and jumped into my arms. It suddenly dawned on me that she relies on me to be there when times are tough. And it's always going to be that way. Suddenly I thought, "I'm a dad."

step five: be a dad
Some men feel marginalised because they get home from work, don't know what's going on and don't feel confident enough to get involved. Some women are also in a hurry and think it's just easier and quicker if they do it. Well, you don't need an invite to be a parent so I would recommend elbowing your wife out of the way and getting into it. I used to get home from work, bowl past the wife and head straight for the bathroom and turn the taps on. Bath-time was my time and every night I would clean the kids within an inch of their lives. I could also construct magnificent towers with bath toys and make funny noises with the help of plastic ducks.

Another thing I do is make Saturday morning my time with our children. Give your beloved a sleep-in and take junior away for an hour or two. She will try to talk you out of it but be a man, put your foot down. The best parents are rested ones. It's actually really cool to be in full charge of a baby and the more you do it, the better you will be at it. At the very least, bundle the baby in a pram, grab your iPod and head around the block.

step six: park your pride
I would suggest packing up your pride and ego and popping them away in storage - they won't be needed for a little while. Once you've done that it means you have the power to change your mind whenever you want. My wife and I declared we wouldn't have the baby in our bedroom because we would be independent parents. We could shut the door on our new arrival and everyone would get a restful night's sleep. This policy lasted about three minutes once our daughter was chaperoned through the front door. I sheepishly moved the bassinet into our room and not a word was spoken. We both knew it was right. It stayed that way for four months.

Also, if you park your pride you won't mind acting like a complete idiot in public. My wife thought it would be cute if I dressed as a giant bear at my daughter's Teddy Bears' Picnic birthday party. My entrance was a little too enthusiastic and I made half the kids cry. Those who weren't clinging to their mothers looked positively bewildered as I trotted out a very bad rendition of Teddy Bears' Picnic on the ukulele. What made is worse was that nobody knew the words so I had to go solo. I confiscated the video before it made the internet.

I have been caught in public making whooping noises and flapping my arms as I chase seagulls with my daughter. I've also never danced so much while sober as I have with my daughter. One last tip, you are never too old or too cool to enjoy a trip in a bouncy castle with your child.

step seven: have fun
A mate of mine told me once fatherhood only gets better. This may be true until your children become teenagers. I've still got some time as my daughter is nearing three and I am enjoying the chance to re-enact some highlights of my childhood. One night I put up a tent in our backyard and my daughter and I slept in it. Wifey brought out popcorn and although my daughter was wrecked the next day, she asked about going tenting again for two weeks until I erected a giant hut in our living room and we slept in that. I can't wait to build a dam in the local creek with her.

Don't be too tired or lazy to plan adventures for your children. They don't really want flash toys, what they really want is to hang out with you. A few weeks back we grabbed a jar, our gumboots and went rock-pooling. We spent a few hours collecting weird and wonderful things from the ocean to show Mum. Another time the whole family went fishing at the jetty. This was especially entertaining when my daughter threw the whole hand line in the water. I guess I'm hoping she'll pay me the ultimate compliment and one day take her own kids on similar adventures.

Life rips by at breakneck speed. I play football with a bunch of 20-somethings. Young roosters living a life devoid of responsibility. That was me 10 years ago. They wonder why they don't see me out on the town on Saturday nights. I don't have the heart to tell them I have a better show going on at home. They wouldn't believe me, and anyway I can't fit them all in the tent.

I realise I've made fatherhood sound like sacrifice and hard work. It is, but it is also one of life's great joys. I don't say that lightly. In male terms, fatherhood is way better than golf, drinking and Sky Sport. It's even better than poker nights and stag weekends in Queenstown. My words won't convince you of this. It's something you have to experience yourself. Good luck.

Hadyn Jones is a husband, apprentice father of two, a stay-at-home dad who never stays home and an occasional journalist.