Solo parent Hannah Noel makes the most of her village 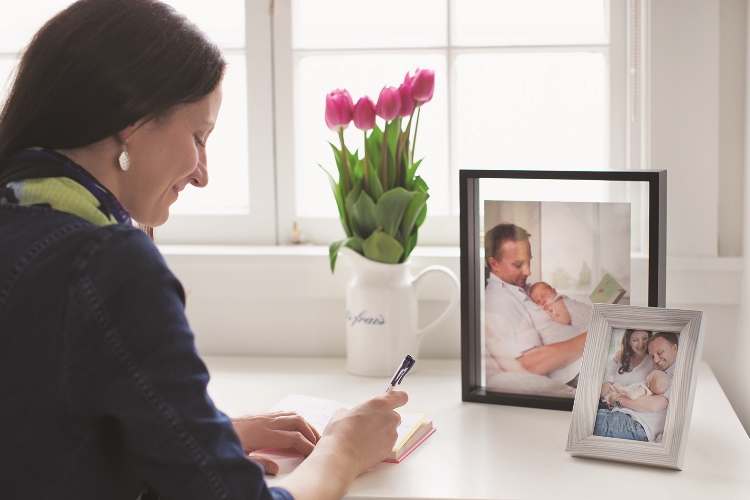 Pippa Henderson pops in for a cupcake and a catch-up with the Noel family – a mother and daughter duo living to honour others.

Elise Noel is four, and “more-than-a-half”. She puts a lot of weight on that fraction. It reminds me of how people  approaching forty insist they’re only mid-to-late-thirties, but Elise is actually correct. She’ll be five in January, and can’t wait to go to school. She can already write her name – with a perfectly formed capital ‘E’ and the last ‘e’ in lower case. She’s a bright, articulate, engaging and adventurous little girl who brings a lot of joy to those who know her. She loves ‘helping’ activities, like baking and gardening, as well as swimming, riding her bike, and hanging upside down on a trapeze. When she grows up she wants to be a ballerina – at the moment. Being four (and more-than-a-half) it’s her prerogative to change her dreams with the seasons, and her family and friends look forward to her next idea with interest.

Elise also loves reading, just like her mum, Hannah, and her late father, Jared. A treasured part of Hannah and Elise’s day is snuggling up together with a book. They’re currently reading Charlotte’s Web, a favourite from Hannah’s own childhood, but they also dip in and out of some of the wonderful children’s books Hannah has discovered that help explain grief and loss in a way that children can understand. OHbaby! Magazine shared an earlier chapter of the Noel family’s story in 2014, when Elise was a tiny baby. To recap, Hannah and Jared had been married for 11 months when he was diagnosed with metastatic bowel cancer, at the age of 28. Initially they weren’t sure if they’d have a family, or even be able to, but Jared responded well to treatment, and after a period of stability, they went ahead with IVF treatment and became pregnant. They knew it was highly possible that Jared wouldn’t be around for all of their daughter’s childhood, but during the pregnancy his disease progressed more quickly than expected, and they weren’t sure he’d make it to her birth. Incredible generosity from friends and strangers via a Givealittle campaign helped fund treatment with the drug Avastin, which stabilised his disease for a time. Jared was well at Elise’s birth and for her first few months, but sadly he lost his battle when Elise was eight months old.

Four years later, Hannah and Elise light candles and visit ‘Daddy’s garden’ at the cemetery on special occasions. Together they bake a cake on Jared’s birthday and spend significant dates with family and close friends. But Hannah also tries to talk about Jared with Elise every day. “He is a part of our daily conversation, and I hope he will always remain so.”

SHARING THE LOAD
Single-parent families are common in New Zealand – at least one in five Kiwi kids live in a single-parent home. Hannah points out that, while the pathways to single parenthood are diverse, the challenges are similar: a single income, complexities of childcare, coping with the fatigue of parenting alone, and worrying about your child/children missing out. “I’m not an expert in parenting, but here is what I know: children are hardwired for love and belonging, and every child needs a safe and secure attachment to one primary caregiver to thrive. But parenting is the hardest job, and I think a single parent needs a ‘village’ of kindness, non-judgement and support around them. There are many ways to be a good-enough parent, no one does it perfectly all the time, and it’s important not to feel alone!” Hannah and Elise’s village comprises Elise’s devoted grandparents, aunts and uncles, their friends, their faith community (Mosaic Morningside), and their ‘Rainbow’ whanau – Elise’s daycare teachers and peers. Hannah is truly grateful to all of them for their love, support, childcare (both for when she works and when she needs a break) and the way they provide a sounding board for the hardest parenting dilemmas. “Importantly, they also tell Elise about what Jared was like” says Hannah, “his endearing, funny and quirky qualities, and stories of his life that help her build a picture of him, as she doesn’t have her own memories. People need permission to share those things – as a society, we’re not very good at talking freely about those we have lost.”

THE PEOPLE IN YOUR NEIGHBOURHOOD
Hannah is a full-time paediatrician, working Monday to Friday with some evening, weekend and on-call shifts. Despite the high demands of this job, she’s passionate about what she does, as was Jared. He was also a doctor, they met during their medical studies.  “I love caring for children and their families” shares Hannah. “I love that I learn something new every day, and I love that I get to work with an incredible team of health professionals who work so hard to make a difference for these children.”

Meanwhile, Elise goes to childcare on-site at the hospital. Hannah is grateful for the amazing teachers and the way Elise is known, loved and nurtured in that environment. “Sometimes if I get caught with a sick child or something I need to finish at the end of a day, I collect Elise and bring her back to the ward where the nurses spoil her with iceblocks and stickers. She loves it!”

But Elise approaching school-age has meant that Hannah has needed to reconsider the best way to manage family life and childcare going forward. “About a year ago I was ready to move back to Morningside and be settled before Elise goes to school, and some close friends, the Cottles, were also contemplating a move within the neighbourhood. Together, we decided that it would work really well for both families to share a house. Financially it would be easier, and living intentionally within our community would mean that Elise and I would be less isolated. We could share childcare and school drop-offs and pick-ups, and Elise could stay in her own bed when I am on late shifts and overnight call.”

The dream has become a reality. Hannah recently bought a beautiful five-bedroom villa with Nigel and Cathie Cottle – who were amongst Jared’s closest friends before Hannah and Jared met. The villa is now home to Hannah and Elise, Nigel and Cathie, and their three daughters (Anais, 17, Portia, 15, and Trelise, 7). “The living arrangement is a bit outside the norm for New Zealand – as a society, we’re very attached to the concept of one family per house – but this is working for us.” The two families are already in the process of giving the house a fresh lick of paint, and are discussing renovations to make the best use of their space.

The location of their new home is ideal. It’s not far from ‘Crave’ – a neighbourhood cafe that the Noels and the Cottles part-own as members of the Crave collective. The collective is all about making the community a better place to live, and the Noel family are super excited to be living closer to the action. Especially in time for Elise to start school, because as you’ll recall, Elise is four and more-than-a-half. OHbaby!: How do you create the support network you need?
Hannah: By inviting people into your life, accepting love and support, and learning to ask for help. It sounds simple, but I still find asking for help really hard.

OHbaby!: Aside from ‘village’ support, what else can help single parents cope?
Hannah: Having realistic expectations and self-compassion is paramount. Counselling is also valuable to help process your own experiences and emotions, so that you’re more present and available for your children. We need to actively manage stress with what works for us personally, be that exercise, mindfulness or company. Other keys include established and dependable routines (especially with young children), seeking and accepting help, and having some time-out from parenting now and then. I’m also grateful for a compassionate and flexible working environment. At the end of the day, a sense of humour is essential, as is celebrating your child’s awesomeness and reflecting on what a privilege it is to be a parent.

OHbaby!: How do you look after yourself?
Hannah: True to my introverted self, I need to get away from the world to recharge. I love nothing better than tucking up with a book (or podcast/TED talk) and cup of tea in the evenings, escaping outdoors with Elise on her bike in the weekend, and having a quiet wine with friends while the kids play. Elise occasionally spends a week with my parents in Dunedin, which she adores – and an occasional break from parenting is also good for my soul!

I did a mindful parenting course through the Parenting Place which I found so helpful. And I see an amazing counsellor who is helping me process my grief, rediscover joy and meaning in the simple things, and trouble-shoot parenting dilemmas. My faith remains an important anchor, and I keep a gratitude journal to remind myself I have so much to be thankful for. Jared and I both love the Bible verse from Micah (6:8) about acting justly, loving mercy and walking humbly. To simplify it for a four-year-old, we talk a lot about being kind and generous to everyone, especially those less fortunate than us. We do our best to appreciate the small things in life. This reflects Jared’s legacy for Elise.

To read more about the Noel family and Jared’s wishes for his daughter, check out his book, Message to My Girl: A Dying Father’s Powerful Legacy of Hope.

You can also find their previous feature story at HERE