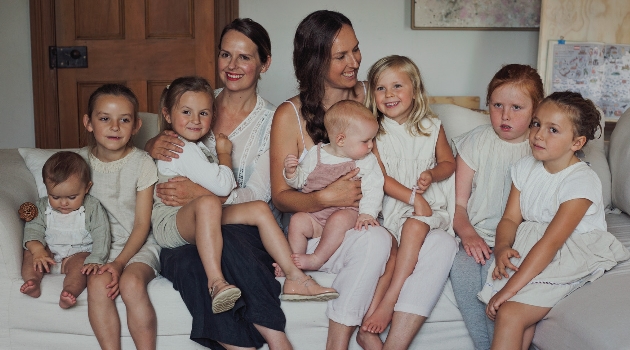 Pippa Henderson gets back to grass roots with Gisborne’s entrepreneurial Thorpe sisters, with seven daughters and multiple businesses between them.

It’s tempting to start this story with “Once upon a time…” as there’s something idyllic about the simple down-to-earth way in which sisters Chelsea and Zoe Thorpe live their lives. Their homes are certainly in keeping with a setting for a fairy tale. Chelsea, husband Gene, and their daughters Primrose Star, seven, Coco Violette, five, and Orla Buttercup, ten months, live in an old villa in a quiet leafy neighbourhood in the small coastal city of Gisborne. Zoe, partner Gareth, and their daughters Clover, eight, Willow Loveday, five, Luna Valentina, four, and Florence Poet, eight months, live in their parents’ original home with a rural outlook towards the outskirts of town – but with Gisborne’s easy living, this is actually only a few minutes away.

There’s a real closeness between the two families, fostered by more than just proximity. The similar ages of Chelsea and Zoe’s daughters and the time they’ve spent together since birth has meant their relationships have been more sisterly than cousin-like. “They mostly love each other, sometimes hate each other, but always want to be together” says Chelsea. No doubt they’ve picked up on Chelsea and Zoe’s open and honest relationship. The sisters have supported each other throughout their adult years in relationships, childcare and business ventures – and there have been plenty of the latter. Doin' it for themselves
Thirteen years ago Chelsea opened her first store, Modern Lovers, in Gisborne, as a way to showcase her own clothing along with other beautiful New Zealand clothing ranges, and Zoe became very much involved. Zoe is a chef, so after closing Modern Lovers, the sisters fulfilled a dream by opening the café The Winemaker’s Daughters. “It was an amazing little café” reflects Chelsea, “created on a very tight budget and loads of passion.” The week they opened the café Zoe found out she was pregnant with Clover, and over the four years of running the business Zoe also had Willow, and Chelsea had Primrose and Coco – with Coco arriving on the weekend the café changed hands. The following summer the industrious pair started homeware and children’s store Gathered, which they sold just before Orla was born. “This was a way for me to surround myself with beautiful items without having to own them myself” says Chelsea, “and I loved the idea of making some items more accessible in the region.” Chelsea has also been making custom wedding dresses for over ten years. “It is my passion, but I also find the pressure of creating such a special item overwhelming, so I currently only open a few spots each year.”  And then there is/was Chelsea’s girls clothing label, Sweet Jane Petite. “I love designing and creating children’s clothing, but at the time it was one too many jobs … but it is in my five year plan to revive it!” A prolific sewer, most of the pieces the girls are wearing in these photos are made by her. Last but not least is the sisters’ doll-making business, Poems for Buttercup (bymyhand.co.nz, instagram: @poemsforbuttercup). The name of the business is a combination of Orla Buttercup and Florence Poet’s middle names, and the dolls are inspired by the Steiner train of thought. Intentionally left simple, the dolls’ faces and bodies are a vehicle for imaginative play and allow children to imprint their emotions. The dolls are filled with New Zealand sheep’s wool, the hair is mohair boucle and the skin is cotton knit. “Making dolls is something we had always thought about doing together and the timing just seemed right. We didn’t expect such a positive response with sales, so it has been a little difficult to keep the balance we so craved.” Finding the right pace
Juggling business with family life has been more complex than usual for Zoe, as Clover was born with a genetic condition called ‘P136 deletion syndrome’ which comes with complications including delayed speech and gross motor skills. Attending school has been a huge challenge both physically and mentally, so Chelsea and Zoe have been fundraising to help get a Steiner School up and running in Gisborne this year (as an extension of the Steiner-inspired childcare the girls have been attending). “We’re lucky to have a very supportive family living close by so there is always someone to call when we have specialist’s/doctor’s appointments, horse riding, swimming lessons and so on” says Zoe. “We are constantly trying to find the right balance, giving her the extra time she needs but not pandering to her too much. The biggest lesson we have learnt so far is acceptance. Accepting Clover for who she is, the way she is and where she is, and not wasting our energy wanting her to be different.” As for Chelsea, she’s found that keeping busy allows her to not become overwhelmed by motherhood. “I feel keeping the balance between doing what you love and looking after who you love lets me be the best version of myself. Some weeks I spend less than an hour working but others it can be up to 20 hours, but this is the way I love to work and I feel I am a far better mother for doing so.” All in the family
This close-knit family is actually even closer than you think. As Chelsea and Zoe are busy making dolls in their workroom, Chelsea’s husband Gene is working on site in the cellar next door. Gene takes care of marketing and sales for Longbush Wines, which is sold alongside First Press Grape Juice and a selection of gourmet cheeses under Chelsea and Zoe’s father’s umbrella company, Gisborne Gourmet. Gene is also an abstract painter, so everywhere you look, creative juices are flowing. Chelsea and Zoe credit their parents for the creativity and entrepreneurial natures evident in all their siblings. Their eldest sister Cleo is a teacher, painter and textile artist, their brother Ché works in animation and also sculpts, and their brother Ash is much like Chelsea, and into many things. “Our parents were hippies” says Chelsea. “They grew organic vegetables, ploughed the fields with Clydesdales and made their own cheese. Once they found out they were expecting their first child they had to grow up. Dad became a beekeeper, and Mum climbed the Himalayas!” Then, when the siblings were children, their father became a winemaker, and their mother made intricate folding books. “Dad is from a family of businessmen, so beginning and growing businesses is in the blood. Mum has always been a crafter and maker. Together, their creativity, enthusiasm and drive have been a powerful influence on all of my siblings and me.” It’s no wonder there’s a storybook quality to Chelsea and Zoe’s lives. And now, with a legacy of raw energy, talent and resourcefulness spilling over into the next generation, it’s tempting to end this story with “…and they all lived happily ever after”.