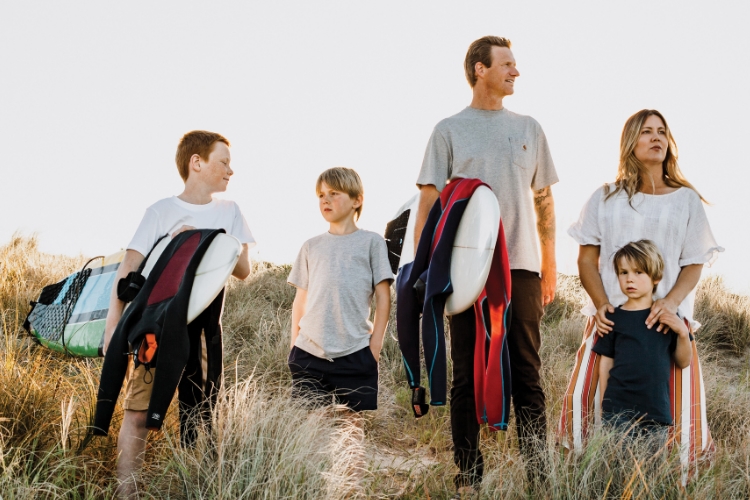 Pippa Henderson goes barefoot at Mount Maunganui with the Cummins family, and hears their story of an unexpected blessing.

Back in the day, before readily available contraception, family trees were laden with unexpected extra siblings, and parents could rarely state with confidence that their family was ‘finished’. These days, by comparison, we generally have a huge amount of freedom to plan when we start our families, the age gaps between our children, and when to put a stop to baby-making altogether. But despite this scope, and all our best intentions, life can still throw us a curve ball, and fertility has its own agenda. While some couples balance the conception equation perfectly but still don’t conceive, the stork arrives completely out of the blue for others. It’s shocking to even imagine going back to square one when your youngest is well beyond nappies. We spoke to a family who will soon be doing just that.

Abby and Sam Cummins live in Mount Maunganui with their three medium-sized boys: Connor, ten; Ikey (short for Isaac), eight; and Ari, five. They moved there from Muriwai, on the west coast of Auckland, about four years ago, to be closer to family, friends and “relatively empty roads”. Their free time involves plenty of skating, surfing, biking, running, reading and cooking. And laughing. Sam has a mean sense of humour and a seasoned imagination – summing up his boys’ personalities by likening them to celebrity chefs: Connor, we’re told, is Gordon Ramsey, Ikey is Jamie Oliver and Ari is Action Bronson. But sometimes Sam, an adviser for a local philanthropic trust, has to be serious and play it straight. Like when he’s in an important work meeting, for example, and needs to stay focussed – despite receiving an unexpected text from Abby that reads “Whoops! Looks like baby four is on the way!”. Somehow Sam managed to contain his reaction, quietly replying with What????”. (Well, so we’re told – we all know this is going to print.)

Abby recalls Sam didn’t sleep well that night, and says things went in slow motion for the first week as they got used to the idea. Three months on, Sam sums up the experience as “sheer terror, followed by resigned curiosity. I wasn’t really surprised – a good coffee from a petrol station is a surprise – but if you ride the lightning, eventually you’re going to get burnt”. As for Abby, she admits that a part of her had always hoped that they might have a surprise baby – until it actually happened! “It felt different to our planned pregnancies – way more anxiety, way less excitement.” But the couple’s feelings are changing as the pregnancy progresses. “The sheer terror returns, but less frequently” admits Sam. “I like babies, they make you a minor celebrity at family events, and they give you an excuse for afternoon naps. Also, I just found out that Labour, in all its benevolent largesse, is going to give us $60 a week for a whole year (but only if I swear off plastic bags and whittle my own straws).”

“I’m definitely getting more and more excited” says Abby. “I can’t wait to watch the boys loving their new sibling. We took Connor to the 12-week scan and he was in awe. I’m treasuring the experience of watching the kids being a part of it all.” 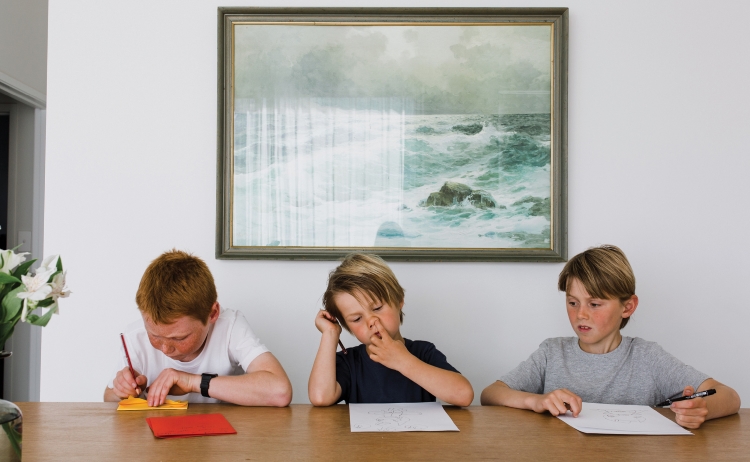 How did you go about telling your friends and family, and how did you feel about their reactions?

Sam: Phone call for mum, texts for the rest. We took the boys out to a Chinese buffet for dinner and broke the news. They had the best reactions out of anyone, but were soon distracted by the dessert bar. They went from disbelief, to anger, to happiness and then back to ice cream in three minutes. If you’ve got to fire someone, break up or even tell ’em their dog’s died, Kwang Chow’s got your back.

Abby: We told our close friends and family within the first week, as we couldn’t keep it a secret for long. Their reactions were totally different to when we were having babies two years apart. Everyone laughed first, then a few said “Hmm, maybe we should have another one too”. Everyone was surprisingly positive, and there was a sense that people were going to enjoy watching how this all played out. 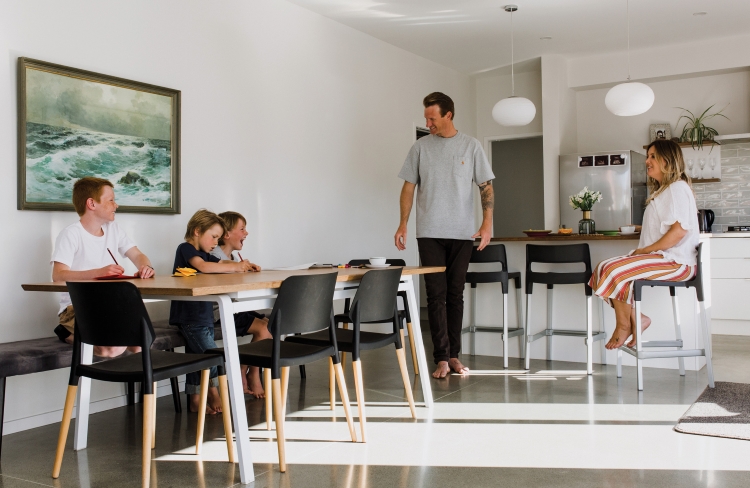 Are you starting from scratch again with all the baby essentials?

Abby: Yes! We’ve moved house four times since our youngest was nine months old, and we’ve also gifted things to friends and family having babies, so our baby gear is long gone. But I think we’ll just get the bare minimum this time round.

Sam: I’ve heard there’s been great technology advances in the last nine years – the pram’s been re-invented! Mountain Buggy, if you’re reading this, let’s work something out… 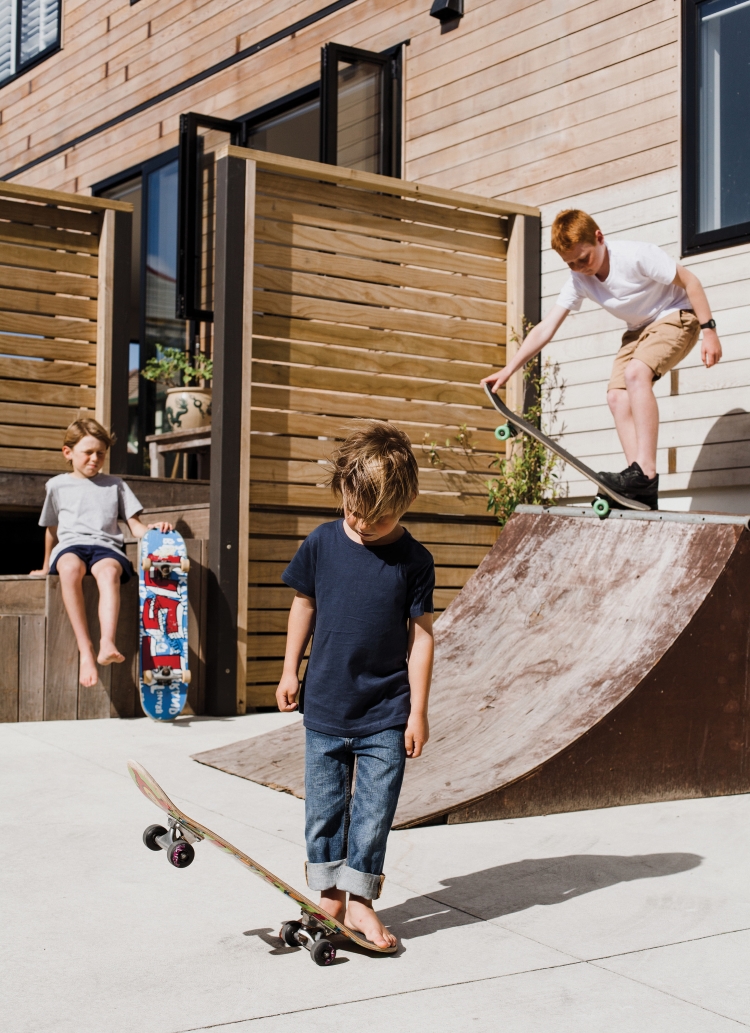 Is your baby’s gender a big issue to you?

Abby: It would be lovely to have a girl this time round, but it’s not the biggest issue, as we love being a boy family. Sam is one of four boys and it’s so special when we all get together. I think Connor would love another brother he can teach how to skate and surf, and the little boys are keen for a sister.

Sam: Yes, but less than hair colour. It’d be so cool to have a girl, but I’m pretty sure it’s going to be a boy. Whatever it is, hopefully it has red hair, so Connor isn’t the odd one out.

Are you going to find out baby’s gender at the 20-week scan?

Sam: Not this time, it’ll be tempting, but we’re going to hold out. Knowing my luck, we’d find out that it’s a boy, and then be slightly bummed for 20 weeks. This way we get to hold on to a glimmer of hope that it’s a girl, and then the disappointment will be overshadowed by a healthy little boy with orange hair. What are you going to do differently, fourth time round?

Abby: I didn’t work while the three boys were preschoolers, but I think I’ll try to keep working this time round. And I tried to stay home so they’d get all the sleep they needed, however life with three school-aged boys is a constant cycle of outside activities, so baby will come along for the ride. I might introduce a bottle a bit earlier this time, so the boys get to experience the joy of feeding.

Sam: Well, given that none of the boys appear to be child geniuses, obviously we were doing something wrong. They can’t even speak French. So, this time it’s Baby Einstein, Mozart, piano lessons, the Russian classics and Steiner/Regio/Montessori, plus a strict baby keto diet.

How do you anticipate your baby changing your family dynamic?

Abby: Each time a new baby arrives, it’s like we couldn’t imagine them not being a part of our family, so I’m hoping this is the same, despite the bigger age gap. The boys are a really tight gang so I think they’ll be stoked to have a new member.

Sam: I anticipate an increase in double shifts (work at work and then work at home) for my foreseeable future. With Abby’s first-trimester tireds, I’m already pretty much a solo dad. I expect this will only get worse. Everyone’s going to have to pony up and help more.

How do you anticipate your baby changing your lifestyle?

Abby: We recently went mountain biking in The Redwoods as a family, and I realised that these sorts of activities we can finally do together will have to take a back seat again. I love that we live so close to the beach though, so watching the family surf will still be easy. I think Baby will have a bigger impact on our current lifestyle than we realise, but the positives will far outweigh any negatives.

Sam: I’ve got three kids, a mortgage and a nine-to-five. The only thing that Baby will be cramping is space in the back seat of Abby’s people mover.