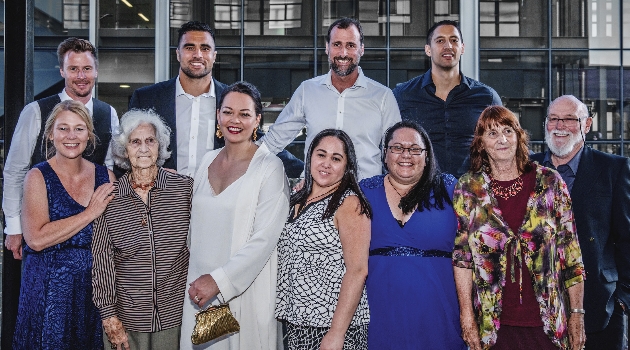 Does the old adage ‘the more, the merrier’ really ring true when it comes to family size? Pippa Henderson asked the Messam tribe to share their secrets.

Marianne Prentice (née Messam) is at the very heart of the OHbaby! team. She’s been on staff for four years as office manager and also takes care of social media and marketing. Marianne is the perfect blend of pragmatism and tenderness; there is nothing she cannot do and nothing she wouldn’t do to help someone else. She’s one of those people you feel completely at ease with – like you’ve known them forever, like a sister. In fact, she exudes such a strong sense of identity, you can instantly tell she’s come from somewhere special. Turns out she’s from a family of ten. So, in keeping with this issue’s theme of ten, we thought we’d look into the unique dynamics of her family of origin – a truly special family that has influenced more lives than you’d ever imagine possible.

Marianne’s parents met and married in 1965. Marianne’s father, Lewis, is an English immigrant, and her mother, Wanda, came to New Zealand from Holland as a child. Soon after they married, Lewis’s mother died so the couple moved in with Lewis’s father. It was a modest three-bedroom home on a quarter acre in Rotorua, a home Lewis had helped his parents build on their arrival from the UK. Soon came the pitter- patter of tiny feet, followed by pair after pair after pair. Wanda has been a stay-at-home mother continuously for almost 50 years, caring for eight sons and daughters and a steady stream of foster children.

First came Ramon, then Marianne, then Stefan, all thanks to the good old-fashioned birds and bees. Lewis and Wanda then felt the call to extend their family and applied for adoption. Within a few short years, three daughters (Melinda, Caroline and Tamsin) were each welcomed and adopted into the Messam family. After a few more years of fostering young children, they turned again to adoption with the arrivals of Liam and finally, Sam. It was unusual for a European couple to adopt children outside of their culture back then, but they relished their family of mixed ethnicity and laughed off the curious stares. “We’re just a couple who thought it might be fun to do something that helped, and hoped we had the faith to keep going in the difficult times” says Lewis. “It must be said that we hoped it might influence our kids and give them some ‘ammunition’ to tackle life.”

As the family grew and changed, the house Lewis and his father had built expanded to meet their growing needs. Marianne fondly remembers her grandfather living with them. “He claimed the hordes of children kept him young, though I’m not sure how he endured the mighty din and constant trampling of his prized garden with such good grace!” As the older children left home to pursue careers, the younger children took on their roles. “As the family aged, the dynamics changed, with siblings taking over the shared responsibility of making the foster children welcome, explaining house rules etc” explains Lewis. But even as children left the nest, Lewis and Wanda’s workload didn’t ease. The fostering only came to a close a year ago. “We reverted to younger fosters, and for the last several years, to under-one-year-olds. Foster children appeared on a regular basis, sometimes at a moment’s notice ‘for a fortnight’, which is CYPS language for an undetermined length of time.” All up, it was once calculated that this legendary Kiwi couple had taken about 300 children under their wing. Now they are also grandparents to 12.

OHbaby!: So what was it like, growing up in an ever-expanding family?
Marianne: Our home environment was somewhat chaotic, but somehow also relaxed. It was a large rambling house, with Dutch-style cosiness, lots of wall hangings, decorative lamps and photos. Pretty much everything was secondhand. Mum delights in using her creativity in ‘doing things up’. Reading and playing outside were encouraged, and there were gaps in the garden hedges for the neighbourhood kids to join us. We all had rostered jobs to do from an early age – dishes, vacuuming, etc. By intermediate I was baking for school lunchboxes and helping make simple dinners for everyone. While Mum and Dad were the bosses, they always talked through things that would affect us as a family, and were open and honest about the adoptions and budgets, and how our behaviour affected one another.

OHbaby!: Budgeting must have been a challenge! How did you manage?
Lewis: Well, we certainly had some stressful times. An unexpected car bill, for example, would mean a chat to the garage to negotiate payment and for three months we would be on basic rations. I always earned a little above the threshold to receive any grant, so simply put, there was no government help other than the fostering money, which often didn’t cover necessary expenses, though it helped. Our strategy was that there were bills with which you had no choice … so into a notebook went all of the essentials and whatever was left each fortnight was it! We did all of our work through having a Christian faith, and help always seemed to arrive just when we needed it. I think it’s fair to say that, while we may have thought that the kids ‘went without’, they never seemed to feel that they did.
Wanda: My parents had emigrated from Holland after the war with very little to their name so I learnt the art of making a dollar stretch and ‘upcycling’ – turning old things into something new. Careful budgeting was key. The budget did mean eating on the cheap; things like mince, or spinach with baked beans, mashed potatoes and cheese topped with a little sausage – there’s a family legend about that! I figured as long as there were veges with every meal, we would be okay. OHbaby!: Any tips for making food go further?
Marianne: Mum did a big, carefully budgeted shop fortnightly. Often there was a big pot of soup on the stove for Friday night dinner, which was then lunch for the next few days, with things like cheese toasties to stretch it out. We had a modest vege garden and sometimes the budget stretched to a half beast of meat in the chest freezer. It was pretty common to have a rice dish with onions and spices, whatever veges were in the garden, and (we tease Mum mercilessly about this) one sausage for the whole family. (My brother made a throwaway comment on national television giving the impression that we scrambled for a shared chipolata, but it would have been a rookworst – a spicy Dutch sausage – that could be chopped up small to add flavour.)

We later learned that the younger boys resourcefully discovered Mum’s famed home baking was an easy swap at school for their choice of tuck-shop junk food! Buying fruit and vegetables in season was key, and when there was a glut of fruit, typically apples and peaches that Mum could get cheap, we’d be set to work around the kitchen table, peeling and chopping the fruit for Mum to bottle. We moaned about it at the time, but it’s certainly a cherished memory now.
Wanda: I’d always look for specials and find a way of making a little go a long way.

OHbaby!: What is your child-rearing philosophy?
Wanda: I don’t think I had a philosophy! I just took each child as they came, and we worked things through as issues arose. Our own children were fantastic with the foster children, welcoming them and helping them to settle in and learn the Messam culture. A sense of humour is essential!
Lewis: I think our philosophy has always been the quintessential Kiwi concept that if you want ‘it’, and you’re hungry enough, then go and make it happen. We didn’t care whether our lot were to be dustmen or CEOs of large corporations, as long as whatever they chose they were good at it, giving life their best shot. All of the children played Saturday morning sport, like it or lump it. Some were very competitive, others just liked to meet up with friends, and I was there, complete with flat cap, to encourage (or embarrass?) them.

OHbaby!: Turns out they didn’t become dustmen, did they? Marianne is a key player in an influential magazine, and didn’t Liam become an All Black?
Marianne: Yes, he’s a professional rugby player, off to France soon. And Sam, a personal trainer in Sydney, went to the Beijing Olympics as a member of the U23 soccer team. (Guess those enforced Saturday morning sports paid off for some of us!)  We’ve all done pretty well in our chosen fields. There is a noticeable theme of education, training, organisation and team leadership that runs through the family, which is perhaps the result of an emphasis on being a role model for the next sibling in line.
Lewis: Even as adults the fun of rivalry and its associated banter exists to this day. Just mention the word ‘Settlers’ and immediately there’s strong debate as to who exactly is the world champion.

OHbaby!: Can you describe home life with eight children in just a few words?
Lewis: Chaotic. Interesting. Never a dull moment.
Wanda: We enjoyed it – a lot of fun times! Our thinking was that we already had a crowd so what’s one more!
Marianne: I would say, being part of a team, we all bring different talents and personalities to the family, but each person plays an important part to make it work.

OHbaby!: What did you give up to raise such a large family?
Lewis: The simple answer is money. But money has never been important to us.

OHbaby!: And what did you gain?
Lewis: Lots of love. Much more than any ‘missing’ money could have bought.