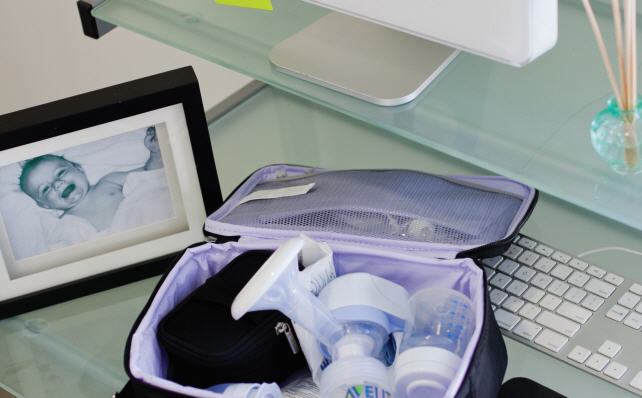 Heading back to work doesn’t have to mean an end to breastfeeding It just takes some careful planning and communication.

Legal executive Nicole Snook says she’s so relaxed about expressing milk at the office, if her colleagues didn’t mind she would “do it at my desk!”

That would certainly raise a few eyebrows. As it is, her co-workers barely notice when she heads off for her daily 20-minute break to express milk.

She has two children and returned to work part-time when they were both around seven months old. She has successfully expressed milk at the office for both.

But she acknowledges it does take a while to establish the knack of expressing. One of her tricks is to close her eyes and pretend that she’s holding her baby, which helps let-down start.

Nicole’s office is in a building that has a specific breastfeeding room for all the tenants to use, which is decked out with a fridge, microwave, seat and pillows. In the past she has also used a sick-bay with a lockable door, and even a lockable meeting room with frosted glass.

She says she has never encountered any negativity around her express breaks, but rather, some puzzled and intrigued faces, and she says she’s happy to explain what she’s doing because,“I want to normalise it.”

Indeed, there’s been a radical shift in thinking in the workplace in recent years. Not only does the law now allow for women to take breaks to express or breastfeed, but some workplaces are now actively boasting about how breastfeeding-friendly they are.

The law
The Ministry of Business, Innovation and Employment (formerly the Department of Labour) says before 2009, facilities for breastfeeding mothers in the workplace were “spasmodic” and as such it was often a disincentive for women to return to work.

So in 2009 the Employment Relations Act was changed which means employers are now required to provide appropriate facilities for mothers who want to breastfeed their babies, or express milk, which in most cases will involve a private room and access to a refrigerator. The breaks themselves are unpaid and are in addition to standard rest and meal breaks, unless you and your boss agree otherwise.

Indeed, while the law is there to encourage a breastfeeding-friendly environment, it states that communication is the key and assumes that employers and employees will be able to work out the details of feeding arrangements between themselves.

If you’re finding it difficult for whatever reason, contact the Ministry of Business, Innovation and Employment at dol.govt.nz or Women’s Health Action which is funded by the Ministry of Health to provide information, advice and support to any employers who are looking to implement breastfeeding-friendly practices.

They have a fabulous website dedicated to breastfeeding and working. You can check it out at bfw.org.nz.

Isis McKay, from Women’s Health Action, says it’s crucial to be upfront and honest with your employer about your plans.

She suggests the importance of framing the conversation in a positive way. For instance, instead of bringing up the potentially offensive “lack of a dedicated breastfeeding room”, try discussing “the need for some private space for 15 minutes twice a day”.

While more women are choosing to breastfeed or express at the office, you may find that you’re the first one in your workplace to do it. If that’s the case you’ll be carrying with you some sense of responsibility for setting up good practices for other mums who’ll come after you. Now, that’s something to be proud of!

If you do have a problem seek advice from your human resources manager, union, the Human Rights Commission or Women’s Health Action.

Vero Insurance has 950 staff nationwide and just over half of them are female. Its Health and Safety Manager, Glenys Barker, says when she first heard of the certification process she leapt at the opportunity to take part in the pilot.

She says in their Auckland office they already had a sickroom which doubled as a place for female staff to breastfeed or express, but now there’s a specific room just for that purpose. It has a clock, a small fridge, a comfy couch, a mirror and hand basin. She says breastfeeding mums who return to work generally develop an appreciation for the policy only after they realise that not all companies have adopted such a supportive approach.

“When they chat to friends at coffee groups and find out what other people put up with, they realise how lucky they are. Other mums might have been directed to a broom cupboard or a little toilet space and that’s not acceptable.”

Another benefit at Vero is that staff are paid during their expressing breaks, even though that’s not a legal requirement. “It’s part of our commitment to being a better employer.”

Isis McKay says her pitch to workplaces is tweaked for their needs. For instance, in the case of a big corporate, she’ll talk about the bottom line benefits of retaining valuable staff.

She tells them about an American study that showed companies with lactation support programmes had a 83-94% staff retention rate, compared with the national average of 59%.

Research also shows breastfeeding mums have less time off work because their babies are usually healthier. All good news for the number crunchers.

She finds smaller businesses are more interested in creating a family-friendly culture in the workplace, so she talks about how a good breastfeeding policy will help their female staff have a good work-life balance.

“It’s not about money and facilities, it’s about being flexible and finding ways to work within the legislation and culture in your workplace.”

As more women choose to return to work after having babies, there’s now an increasing expectation that employers will work with you to help you balance both jobs — your one as an employee, and as a mum.