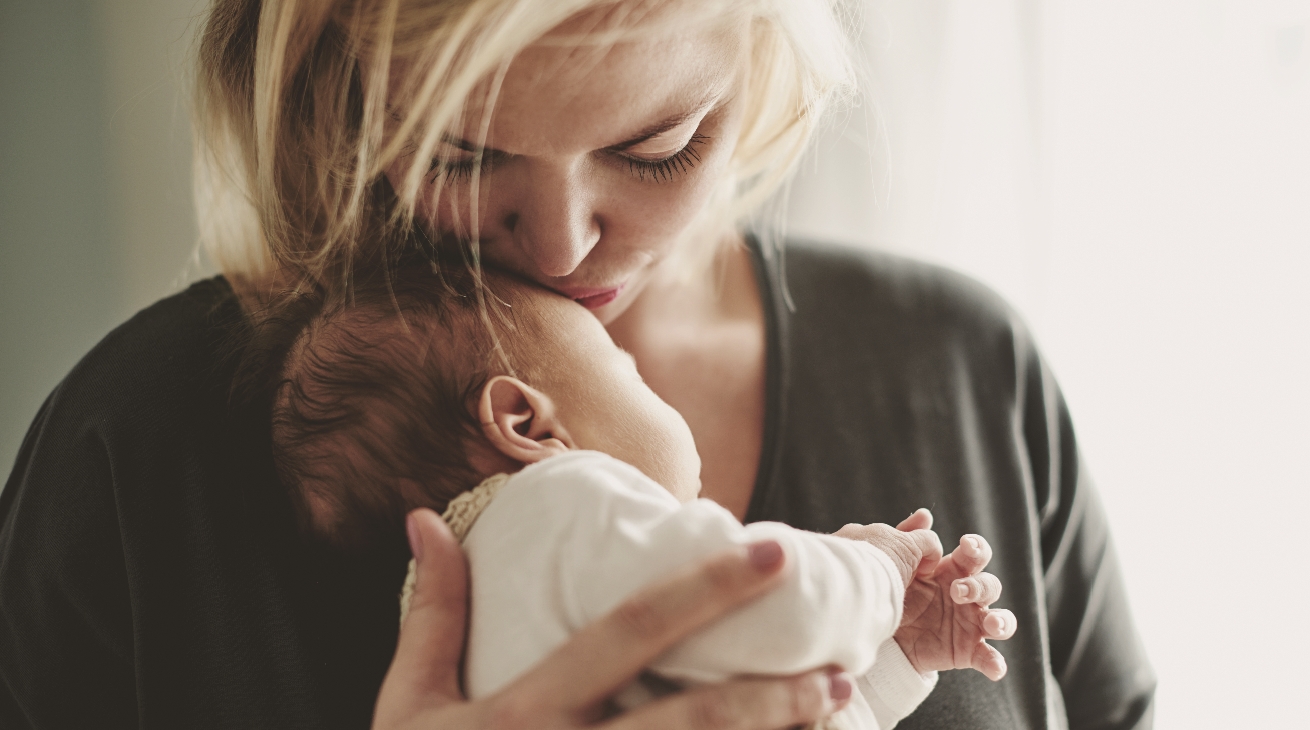 One mother’s story of losing her mum and welcoming her son, and coping with life in the blurry days that followed.

I remember that day so clearly. The autumn sun shone its happy rays through the window, warming every breath as my mother and I laughed and watched my unborn baby somersault in my belly.

I was nearly eight months pregnant and this picture could have been so perfect. Instead, my heart was breaking as I nestled into this woman, my best friend. Her skeleton-like hand, frail and swollen at the joints, stroked my bump. I could feel tears and I fought back.

Cancer stole my mother on May 3, 2012, ten days before my first-born arrived. Never in my life had I experienced such emotional extremes: a harrowing pain, gnawing at every part of me, and an exuberant joy, catapulting my husband and I into the frenzied, mind-blowing world of parenting.

Life and death, love and grief – all rolled up in the same bubble of time – threw me on a journey which I struggled to navigate.

It was not fair, but life never is. It plays no favourites and I’m no different to the many women, men and children who are robbed of their loved ones or who travel through pain and hardship. It can be a very isolating journey but I found comfort in the knowledge that, somewhere, there were many others shedding angry tears of loss, crying in the lonely, quiet hours.  An invisible thread united us and it helped me not wallow … for too long.

Enter a newborn baby and, like all parents, I was suddenly thrown a new responsibility. All of a sudden a dependent little person cried out in the night hours and he needed me. Only me. I was just hanging on because there was no other way. That responsibility is surreal for everyone. It’s incredible. It’s scary. And it’s a game changer.

I remember watching Malachi’s little fingers on my breast as I fed and thinking of my own mother’s journey with parenthood. There were so many conversations we never had, not because of the illness, but because she refused to discuss death. It was not an option and I had to respect her. In her eyes she would live to swoon over her newest grandchild, to babysit and knit tiny clothes.

Malachi was one of the greatest gifts and, without him, I know, losing my mother would have been more difficult. He gave me a purpose, a reminder that, in my darkest hours, someone was absolutely dependent on me. He gave me a reason to live, a reason to look outside of myself.

He was also born on Mother’s Day, and because of that, I had a sense of Mum being with me, of living beside me in our little boy.  But it was hard. So hard.

I would like to say Malachi’s birth story was a textbook example, but I was one of the few women in New Zealand unlucky enough to endure fourth degree tearing by forceps delivery. I was even unluckier to experience a breakdown in internal stitches and required a repeat surgery. Hospital appointments were regular throughout the first eight months. Anxiety crept in, and I worried that my body would break down again.

One day while Malachi was sleeping, I felt a rise of anger, exhaustion and grief within me. I threw a glass and watched it shatter over the kitchen floor. Fortunately, for so many reasons including safety and our supply of glassware, it didn’t become a habit, but I remember the sense of liberation in throwing that glass. It provided an outlet, a release and an expression. I also knew I needed help.

Friends say that I’m a private person, that I keep my feelings and experiences close to my chest until I can really vouch for someone. I guess that’s part of a common strategy to avoid judgement, misunderstanding or gossip. But life had washed me up on an island of vulnerability and those stormy seas bashed pretty hard. I knew I had to ask for help, possibly one of the most difficult things someone can do when they are feeling low.

I also had to squash pride. People had encouraged me and loved me incredibly through this time, often commenting on how strong I was. I found myself learning that there is strength in actually acknowledging the weakness, of reaching out and letting yourself fall into the arms of those who love you.

I was diagnosed with post-traumatic stress and began a journey of counselling and piecing together perspective and healing. If anything, I was impatient to heal quickly, thinking three or so months of ‘talking’ would see me right. I quickly learnt that, once again, my expectations of myself weren’t realistic, that progress takes its own path. There were no magic buttons. To heal properly and delicately, I had to cross this river slowly.

I had never experienced grief before and could only imagine how it would feel. It was nothing like I thought it would be. It affected every area of my life. One of the biggest challenges for a new parent faced with this journey is that there is simply no time to process emotions. I am thankful to friends who minded my son while I unpacked the previous months with a counsellor.

Anti-depressants were helpful but grief still came in stages. Over time I learnt to welcome each stage, to grow through them and to simply own them. Four years on grief still knocks on the door like an unwelcome visitor, and each time I have to choose to accept her.

One of the biggest struggles I faced was a piercing guilt about  not experiencing a deep and immediate bond with Malachi at birth. For the first six months, I felt as though I was in a stagnant tide of nothingness. Of course I loved him, but there was a niggling numbness that I couldn’t feel more. I grappled with anxiety that Malachi would grow up without a bond to his mother. I would watch him play so freely with his dad and compare myself.

I remember browsing in the children’s section of a department store one day and becoming increasingly aware of the number of mothers, grandparents and children shopping together. A hole opened in my stomach and I felt my heart sink through. My husband also lost his mother to cancer so there was no one to fill that void.

My survival mechanisms kicked in, and to counter the tears, I started playing peek-a-boo with Malachi. His cute little cackle erupted and he was in hysterics, totally oblivious to my acting. I was his world, then and there. He knew no other. No pain. No loss. No heartbreak. He just breathed the innocence of a sheltered being. Looking up I was suddenly aware of a small but scattered audience of smiling shoppers. “You two look so happy”, one woman said. “He’s a lucky little boy.” Little did she know that my insides were crying.

It was then, standing in the array of sale signs and adorably dressed toddler mannequins, that I realised we never truly know what is happening in someone else’s world, and to presume a picture of happiness may be only banking on a facade.

There are probably a lucky few women out there who don’t put themselves under the microscope at any sign of weakness. I’m not one of them. I’ve always been hard on myself and I was beginning to understand that my parenting would be no exception.

I was surrounded by a village of friends, of loving people wanting to help, wanting to be there. I let a few people in and they buckled themselves in for what was a long rollercoaster ride of healing and renewal.  I remember looking at Malachi while others changed his nappies and cooed over the sweet smell of a newborn. I remember thinking that it should have been me, a strong and happy me, a different me.

It wasn’t until about 18 months later that I started to recognise shifts in my wellbeing. I would smile and know my insides were grinning with me. I felt less of a fake in the playground and more of a bond with my son. I didn’t realise just how much sadness I had been carrying, and how much energy I had spent fighting it.

There’s a common saying that it takes a village to raise a child; I don’t think we ever stop needing that village. Often the best thing someone could do for me was just allow me to be. Conversations about feelings weren’t always helpful as visitors would leave and I would be left mentally exhausted by the internal excavation. Sometimes I just needed a meal cooked, a bath, the washing hung out. Sometimes I craved a belly laugh or to simply hear about someone else’s life. Sometimes I just needed to be held.

If someone had asked me three years ago if I would be writing my story, I would have said no. I just wanted to focus on moving on and loving my family and friends. We are indebted to so many people who kept us afloat over this time, and I wanted to look to the future and paying the love forward. I had had enough of the spotlight. But as time passed and connections with other struggling parents grew, I realised that life will always have turmoil – but we have a choice in how we handle it.

If I could go back, I would believe people when they said that I would be okay. There is sunshine on the other side, and even though I still weep for the company of my mother, there has been a birth of strength and vulnerability from this experience. Her love still lives on – and he’s gorgeous.

Sasha Turner is a Dunedin-based mother to two beautiful, boisterous little boys. She also writes for newspapers and magazines.