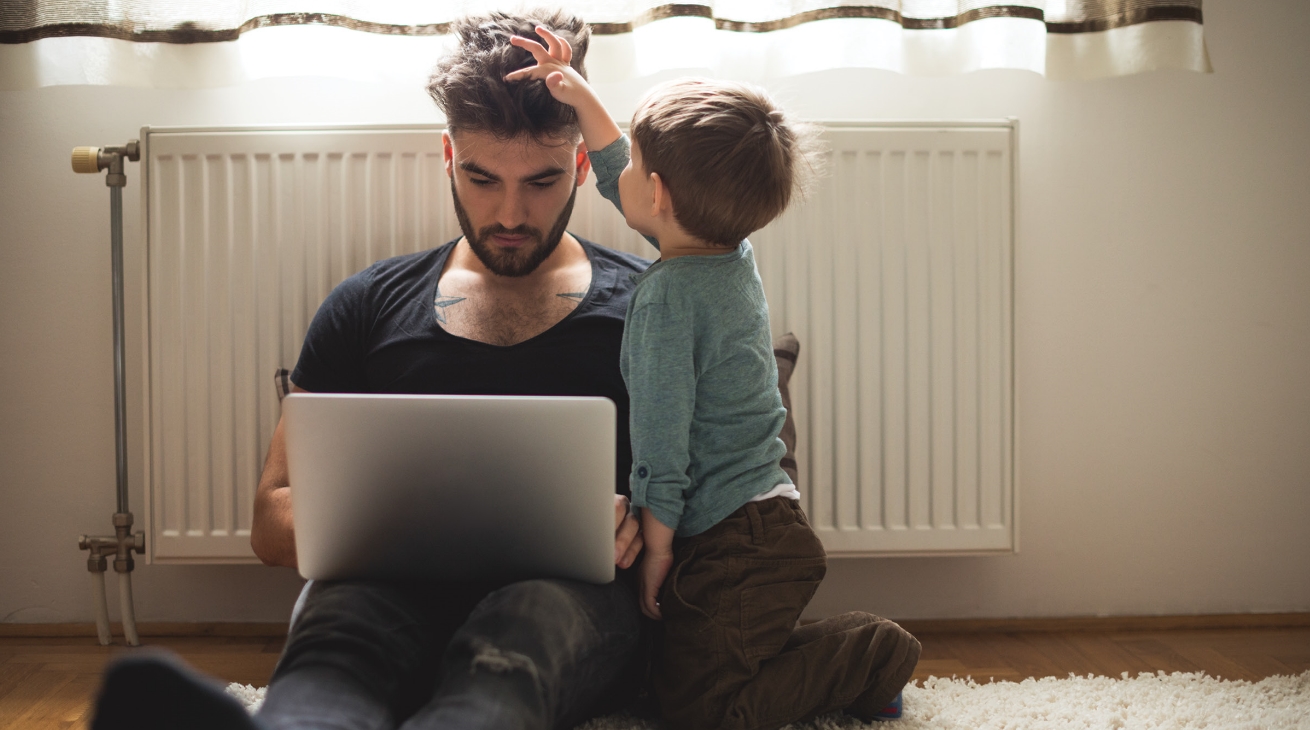 Digital technology plays a big role in modern life but its effects on our very foundations - relationships and family - are worthy of discussion. Miriam McCaleb talks tough about technoference.

Living in our little slice of the modern world is pretty great. Readily accessible dental care is wonderful - imagine life without it. Electricity is fabulous - I use it every day! And I’m supremely grateful for indoor plumbing (ask your grandmother if she had the luxury of a warm wee in the wintertime). But let’s be honest: some of our modern conveniences come with downsides. Oil and gas allow air travel - but burning them adds carbon to the atmosphere.

A takeaway latte is a real incentive for doing the kindy run - but plastic-coated cups are an environmental disaster. And sure, digital technologies have enabled us to conduct important research and stay in touch with friends and whānau all over the world (not to mention find the perfect vintage wallpaper on Etsy!), but as our dependence on digital technology has grown, so have the downsides. It’s time for a tough talk about the ways we allow technology to interact with our families.

Social scientists share examples of tech overuse, pointing to disconnection, addiction, and what researchers call technoference - technology interfering with family connections. This article will outline a few examples of how tech can mess with couplehood, our internal relationships (hello self!) and - gulp - parent/child relationships. Fret not, if all this strikes a chord, we will end with suggestions of how to modify your tech habits. How to disconnect, if you like, for the sake of better connection.

Between you and me
First up, let’s look at how technoference interferes with romantic partnerships.Researcher Brandon McDaniel found that relationships are damaged when partners do any of the following:

😐    allow their devices to interrupt their face-to-face interactions

😐    turn to others online instead of confiding in one another

These habits were found to cause:

😐    more conflict over technology use

Just sit with that for a minute. Our romantic relationships are damaged when we’re interrupted by our devices and when we reach into screens instead of toward one another. “At that point”, Brandon McDaniel says, “some may start using technology to escape their bad feelings. That leads to the possibility of more technoference, continuing the cycle”.

Let me get that straight: a person is spending too much time on their device, perhaps in the shiny world of social media, and the conflict this causes in this person’s real-life relationships (which aren’t so shiny - they come with demands, friction, and bin-liners that need replacing) sends them deeper into the online world of their device. Which causes conflict in a person’s real-life relationships, and so on.

Is it any wonder that excessive use of tech is associated with a range of negative health outcomes? As screen time increases, so does the risk of:

I’m not kidding! It seems highly likely that our smartphones are dumbing us down. Recent research is finding that people are offloading thinking to their device. I immediately feel guilty as I confront my own relationship with Google Maps. I’m pretty sure I’m dumbing myself down in this regard, allowing my smartphone to contribute to what researchers call “cognitive miserliness”. Oh, the shame.

So for the good of our romantic partners as well as our own health, we’d do well to challenge our screen habits. A headline from Scientific American magazine summarises recent research like this: Most Adults Spend More Time on Their Digital Devices Than They Think. Does that make you cringe self-consciously, as I did?

Beware the still-face emoji
Of most concern though is when technoference starts messing with children. We know that the parent/child relationship is a foundational force of immeasurable importance to healthy human development. Children need their parents to be available, responsive, attentive and attuned. Simply being so in between dings of a device is problematic.

When our kids are really little, it is via their relationships with us that they learn the fundamentals of life. They are laying down templates where they learn what it is to be human: “Am I valuable?” “Can I rely on other people?” “What is it that is important in this lifetime?”. And as you’ve probably heard, neurologically speaking, those first three years - aka the first 1000 days - are an opportunity like no other for creating those templates.

For decades, researchers have known about the worrisome impact of emotionally unavailable parents on child development, and have used things like the ‘still face’ experiment to document the ways that our attention feeds our children. In that famous experiment, a parent plays and sings with their baby, and the baby coos and burbles in response. But if the parent drops the smile, loses the song, and stares blankly, the infant will typically move from making increasingly exaggerated bids for attention, through distress, to a similar lack of engagement. Now researchers are warning us that we all imitate the still face experiment every time we read that text, update that status, check that message. This is technoference at its worst.

Adjusting the focus
The Big Disconnect, by Catherine Steiner-Adair, includes these wise words from Winifred Gallagher: “The grand unifying theory of psychology: your life is the sum of what you focus on”. Jeepers. What are we focussed on? And: what are we teaching our kids to focus on?

Because lots of us don’t just hide behind our tech, we encourage our kids to do it too. Despite recommendations to the contrary, the American Academy of Paediatrics tells us that on any given day in that country, 29% of babies under the age of one are watching television and videos for an average of about 90 minutes. And that 23% have a television in their bedroom. This is believed to be contributing to various issues, for example: speech. A recent report from New Zealand’s Education Review Office (ERO) pointed to problems with oral language in a worrying number of our four- to six-year-olds. What’s that about? I’m going to go out on a limb here and suggest that overuse of tech is part of the problem.

A survey by the American Speech-Language and Hearing Association (ASHA) found:

😐    More than half of parents are concerned that tech use is interfering with their child’s development of speech and language.

😐    52% believe technology negatively impacts both the quality and quantity of their conversations with their children.

Fewer conversations will lead to more speech/language issues - that’s a given. But that’s not all: excessive screen time for young children holds other risks, including:

Now, I’ve never met a parent who doesn’t value quality sleep for their kiddos. Brace yourself: new research from the UK reminds us that the light emitted by electronic screens lowers levels of the sleep-regulating hormone melatonin, and the researchers found that three quarters of children aged 6-36 months use a touchscreen device every day. They pointed to toddlers’ use of touchscreen devices as being associated with poor sleep patterns.

Another issue: a recent study in the journal Child Development has pointed to parental tech use leading to problematic child behaviour. To a parent it feels reasonable and important to “just finish this one email”. However, from a child’s perspective, they are sidelined once again, gazing at their parent’s blank face lit up by the eerie glow of a digital device. But when the child inevitably misbehaves in a bid for attention, it’s the child who is blamed. It makes perfect developmental sense for a kid to act out in the face of constant technological disruption to their most important relationship. Remember how important this relationship is for teaching children about the fundamentals of life? (“Am I valuable?”, “Can I rely on other people?”) Technoference compromises a child’s all encompassing absorption of these vital lessons.

Growing pains
As our children mature, their tech consumption does too. Most of the teenagers I know have smartphones (which are dumbing them down!. Further,  the more they use their cellphones, the lower their grades and the higher their anxiety.

Meanwhile, a 2012 research study which surveyed teachers, found that they believe teens’ use of entertainment media has impacted negatively on their academic skills, attention span and writing skills.

Adolescence is another time of great neurological possibility and the obsession with tech is, arguably, hijacking kids’ potential. In 2011, The Journal of Reproductive Toxicology noted: “There is sufficient evidence and expert opinion to warrant an enforced school policy removing cellphones from students during the day”. How many schools do you know with the foresight and courage to actually do so?

But before we assign blame, we really must examine our own habits. A study cited in The Big Disconnect found that 32% of kids feel unimportant when parents are distracted by their phones. Worse: research from the University of Essex suggests that just having a cellphone within sight - even if it’s turned off - can interfere with the sense of relationship connectedness. Ouch.

A recent survey by Common Sense Media found parents spend an average of nine hours and 22 minutes every day on various screens - including smartphones, tablets, computers and TVs. Of those, nearly eight hours are for personal use, not work. (We need some exclamation
marks here. EIGHT HOURS!!!) And yet 78% of those parents believe they’re good role models for how to use digital technology. I suspect they’d do well to read this blunt but useful summary from Scientific American: “To limit kids’ screentime, try unplugging yourself”.