5 ways to thrive when other mums make you feel insecure 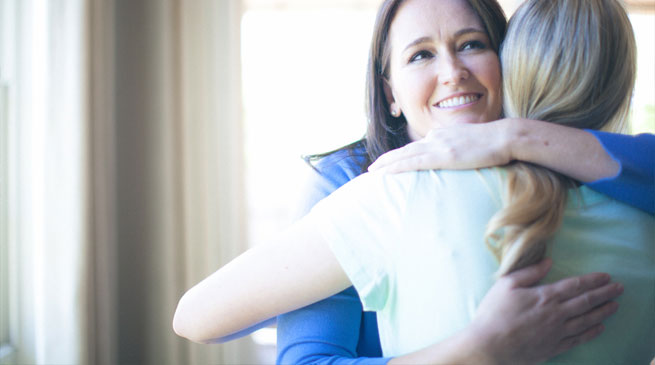 Writer and blogger Lisa-Jo Baker shares wisdom from her experiences of overcoming the insecurities so typical of motherhood to standing stronger in supportive sisterhood.

I knew a new mom once who made me crazy how quickly she lost all that baby weight.
How she didn’t have to drop her son off at daycare every aching morning, who laughed at the easy familiarity of motherhood that seemed like a strange and scary land to me.

We sat outside in the late afternoon sun before church one evening and I watched her feed her boy zucchini and potatoes. And I watched him eat it. While my toddler just spat up anything I offered. Everything and anything he spat up into my lap. And she asked me, like everyone else used to, “Gosh, he’s so tiny – how much does he weigh?”

And I felt the shame of failing at one more element of this new gig all over again and I hated how it made me feel. So out of control. Being someone’s mother.

And I quietly resented her. And wanted to be her at the same time.

Nothing hurts the same as feeling like you’re failing at this core test of womanhood – motherhood.

And since then we’ve added two more kids and I’ve looked around these quiet streets lined with minivans and I’ve read blog posts and op-eds and movie reviews and I see oceans of insecurity because this is the one thing we’re all terrified of getting wrong – how to be someone’s mother. And it makes us quick to point fingers and keep score because we need to neutralize that awful feeling of failing. And the shortest cut is to cut her down to size.

We’re hard as perfectly manicured nails on each other.

Our fear is blind and unable to see the people behind the choices we criticize.

We are the moms who have sacrificed and chosen to stay home with our kids, so we feel justified judging the moms who feel called to work or who can’t afford not to.

We are offended by each other. We take offense at another mother.

Our sister who also bears the scars of opening her life up to the chaos of caring for someone else. Who has also cooked more Mac ‘n Cheese than she would care to remember. Who has also spent decades in a semi sleep-deprived state. Who also has a love-hate relationship with Minecraft.

Who also questions her choices, aches for the names her kid is called in school, keeps watch at night as her baby sweats a fever, wonders if she’ll ever figure it out – this being someone’s lifeline. This surrender of space and privacy and what feels like a large chunk of your sanity; this urgent, driving desire to keep them safe and help them thrive.

The thing is, that the woman we’re so offended by – she bears your name. She bears my name. She is also, “Mother.” And diapers, curfews, and the grueling art of saying “no” run in her veins.

That person we’re pointing fingers at comes to us disguised as ourselves.

What if we could see that?

What if her choices didn’t offend mine?

What if we actually accepted Jesus’ dare to “Love one another. As I have loved you”? What would that look like – to love another mother rather than whipping out our measuring sticks and insecurities?

Instead of judging with raised eyebrows, pursed lips and hands on hips, what if we focused on being the kind of neighbor everyone would want in the motherhood, these winding, confusing streets that are desperate for good Samaritans willing to treat the lost, aching, broken, confused mothers kindly.

What if we really did “Go and do the same,” as Jesus commanded?

1. Stop comparing, start encouraging
It’s the strangest mother-instinct – to instantly compare me and my child to her and her child. Whether I’m standing in line at the bank and the mom ahead of me is telling me how small my toddler looks for his age or I’m watching a room full of delicate, three-year-old ballerinas twirl out of time to the music and mentally measuring mine against everyone else’s ability.

We measure each other to see if we measure up. But what if that tug to compare was instead a trigger to encourage? What if we took the extra moment to deliberately find something to praise in that other mother sitting across from you at the playground? Because building someone else up is the first step to feeling better about ourselves and has the added benefit of defusing all our own insecurities by focusing on someone else’s beauty instead.

So the next time you’re tempted to compare, go ahead and compliment instead. It will do you both a world of good.

2. Be brave enough to be un-fine
For a long time I hid my messes.  I was afraid of them and afraid of what people would say and afraid that motherhood could feel so messy. So I just walked around with this ache of insecurity and new mom panic, ignoring it and politely saying I was “fine” when anyone asked how I was doing. Like maybe a Hello Kitty band-aid could hold together the doubt that was living behind my living room door when my one year old went night after sleepless night convincing me I had no business being anyone’s mom.

Fine is so dangerous, isn’t it? Fine means the end of a conversation. The beginning of nothing. If the Truth can set us free, it’s best to start living in those places, don’t you think? Yes, it’s hard to admit our un-fine moments. But I’ve always found it’s in those moments that people can actually GET to us to help us. We need people. We are a body. And if one part, one new mom hurts, it hurts everywhere else.

So the day I decided after church to admit to a friend that I was anything but fine was the day I discovered the beginning of friendship and the ability to start piecing my un-fine bits back together. No mom is exempt from the un-fine days. And rather than pretending they don’t exist, if we are willing to share how we made it through we’ll find ourselves with the survival skills for managing the next bout of horrible, terrible, no good, very bad days. And maybe a few new friends who will bring over chocolate cake and ice cream when we’re in the thick of it.

3. Give the gift of going first
Here’s the thing – other mothers are desperate to know that they’re not alone in their fear of failure, their sleeplessness, their worry that the baby isn’t gaining weight, sleeping through the night yet, walking or any other host of fears. But they are equally afraid of admitting that out loud.

That’s where you come in. If you’re willing to fess up to your own fears you open the door for all the women in your community to be freed from the isolation of that awful lie that, “I’m the only one who ever felt this way.”

If you’re brave enough to ruthlessly admit that you don’t have it altogether you simultaneously throw a life-preserver out to all the drowning moms. And you give them the courage to do the same one day for someone else.

4. Remember our kids are always watching
When the week winds down and I’m tired and the kids are demanding and I finally snap at the tenth whiney request for something they could easily have done themselves and I explode with, “I am NOT your servant,” I shouldn’t be surprised when a week later I hear the older brother respond to the younger brother’s request for help in the same way.

We are walking, talking, living lessons for our kids. And what we love, they will love. But what we judge, they will also judge. So to set them up for success in God’s upside down Kingdom I must remember to teach them how to serve, how to love their neighbors as themselves, especially when there neighbors don’t look, live or choose the same as we do.

So when I serve my kids I remember that it doesn’t make me their servant, it makes me their role model. I explain what I’m doing and then I tell them I expect to see the same in their own small worlds. We keep including our kids in our everyday lessons; we take them with us when we deliver care packages to families that look different than ours.

We bring our children along to orphanages in my homeland of South Africa and we let them be in the thick of giving away gifts and kicking soccer balls and watching what it looks like to grow up a world away from what their normal looks like. Because our hope and our prayer is that one day they will be at home in homes that look nothing like the one they grew up in, quick to love and slow to criticize, because they started practicing early.

5. Say “Me too” instead of “How to”
Years after I became a mom for the first time. Years after I’d said good-bye to my pre-mom jeans forever and adapted to a perpetual state of sleep-deprivation. Years after my third baby and an international move and a new job one night an email slipped quietly into my in box. An email from the mom I used to measure and re-measure and compare and complain about.

The perfect mom with her perfect son and her perfect waistline that I could never live up to softly admitted to me that she’d felt just as lost as I did. Her heart as lonely a place as mine in those first years of motherhood. Her story that felt miles away from mine, sidling up to say that we’d been in it together all along. We just didn’t know.

Because we were both so focused on the how-tos we forgot the me-toos.

We forgot the freedom of admitting to our struggles and the relief of being able to say, “Me-too.” We forgot that motherhood is a shared journey and better done with a friend. We forgot that being a friend is the best way to find one.

And just like that, the boundary line between us was erased. Or rather, maybe one of us stepped over it. And it got scuffed up by our footprints, our messes, our very different choices – walking right into the middle of a shared story. Sisters. Mothers. Neighbors.

Lisa-Jo Baker is the bestselling author of Surprised by Motherhood: Everything I Never Expected About Being a Mom, her writings on motherhood are syndicated from New Zealand to New York and you can catch up with her daily chaos at LisaJoBaker.com.

Simplifying Christmas: make like Elsa and 'let it go'

Get over Mother's Day disapointment