8 Handy Gadgets: How Do They Rate? 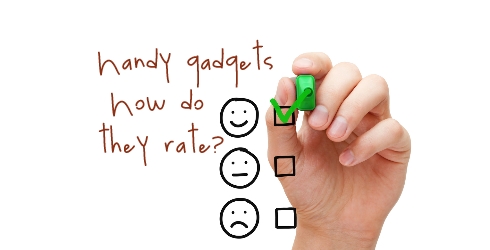 As recently as our mother’s generation, people got excited over swapping their wringer washing machine for an automatic one, revelled in the wonder of their new microwave and celebrated the acquisition of a tumble dryer.

Nowadays we are spoilt for choice when it comes to appliances, especially the smaller ones. Seemingly limitless innovations continually provide products promising to “make life easier”. But is it really as simple as plug in and go? Are all these products designed to help around the house actually worth the cupboard space they now occupy? The OHbaby! team gets honest about those little helpers…

Karcher window cleaner
Cleaning windows is possibly the most avoided job on the domestic front. It takes ages, it requires elbow grease and, even after all that effort, you can still end up with streaks and smears. Say hello to the Karcher window cleaner! It’s a squeegee with motorised suction power — a bit like a dustbuster. And no, this is not an ad. OHbaby! Editor Ellie Gwilliam coveted her friend’s Karcher window cleaner before buying her own and life was never the same — clean windows in mere minutes! It works well on removing condensation from windows on winter mornings and it cleans other hard surfaces too, such as showers and mirrors. It’s quite fun and the kids like to use it too. We’re sold.

Steam mops
Deputy Editor Ruth Brown is the only one of us to have invested in a steam mop and she reports the following: The steam-cleaning mop is touted as a “green” option because it uses just the power of steam and no “nasty” chemicals. It does work well on hard floors and leaves the floors smelling clean and fragrant.

The down sides are: It’s slightly fiddly to use. You have to fill with pre-boiled water and plug it in. Then wait for it to heat up. Also, the electric cable does get in the way a bit and you have to stop and re-connect if you’re changing rooms. Also, despite claims it “freshens” carpets, there seemed to be no real improvement in the carpets after “steam cleaning”. Worth the money? Not really, but it does the job and it’s nice to have sweet-smelling floors.

Breadmakers
Nothing beats the smell of home-made bread. But unless you have hours to spare for kneading and rising, an electric breadmaker is perhaps the most convenient way to bring home the bakery.

However, they are on the bulky side so we wonder if they are worth the bench space they require. Short answer: That depends. If you are in a routine of having all the required ingredients on hand and making a loaf every day, then yes.

You can set it to bake overnight which means fresh bread each morning. Plus you know exactly what has gone into each loaf.

But many a Kiwi kitchen cupboard hides a neglected and “nearly new” breadmaker. If you aren’t going to use it regularly then we suspect you might be better off spending your “optional extra appliance” money elsewhere.

With cheaper brands of bread being readily available, and after factoring in the cost of ingredients and electricity, a breadmaker may not necessarily save you money either, but it will provide a nicer sandwich or piece of toast. And then there’s that wonderful smell...

Stick blenders
The unsung hero of a young family’s kitchen, the stick blender can’t be praised highly enough. It really comes into its own when you’re starting a baby on solids — a stick blender can turn steamed fruit and vegies into purées within seconds. But wait, there’s more! Turn frozen fruit into delicious sorbets, whizz your winter soups, mash your potatoes (you may need a special attachment for this one), you can even whip cream (word of advice: over-do it and you’ve made your own butter). Plus stick blenders are easy to clean and don’t take up much room in your kitchen. A universal thumbs up!

Dust busters
Hand-held vacuum cleaners, or dust busters, are all good in theory, but we have found they tend to lack the suction power necessary to make them really useful. So what should be a quick whip-round to rid the couch of cat hair or spilt glitter before the in-laws arrive is actually an exercise in frustration. It would have been quicker to haul out the vacuum cleaner. On the other hand, a dust buster is handy for cleaning the car and great for encouraging children to help out with housework. But make sure you invest wisely — a cheaper model will probably have minimal suction power and a shorter battery life so is best avoided.

Rice cookers
Cooking rice can be deceptively tricky and many a pot has been burned by a distracted multi-tasking parent trying to cook dinner. Step in the electric rice cooker. Great for preparing meals in advance of the witching hour, with the added benefit of keeping the rice warm if meals are eaten in two shifts. But they are not foolproof apparently. One of our sales team admits to experiencing problems with both a lack of water and an excess of water, so don’t mess with the suggested ratio and you should be okay.

Leaf blowers
We used to get by quite well with a broom, but nowadays the whine of a hundred motorised leaf blowers echoes around our suburbs on an otherwise peaceful Saturday morning. So do they pull their weight? The upside is they are fast and the results are instant and satisfying. The downside, they cost a lot more than a broom and, while sweeping gives you a workout, using a leaf blower potentially just annoys your neighbours. Also, they are noisy. But if you live under lots of leaf-dropping trees and your neighbours have their own leaf blower, you might as well join the chorus.

Pod system coffee machines
We have a DeLonghi Nespresso machine in our office, but only one of us has forked out to have their own personal espresso machine at home. The verdict? Expensive but worth it. It will perk you up when daily café visits are no longer an option.

For more detailed reviews and comparisons of these appliances, we recommend the Consumer website, consumer.org.nz.