The trials of IVF 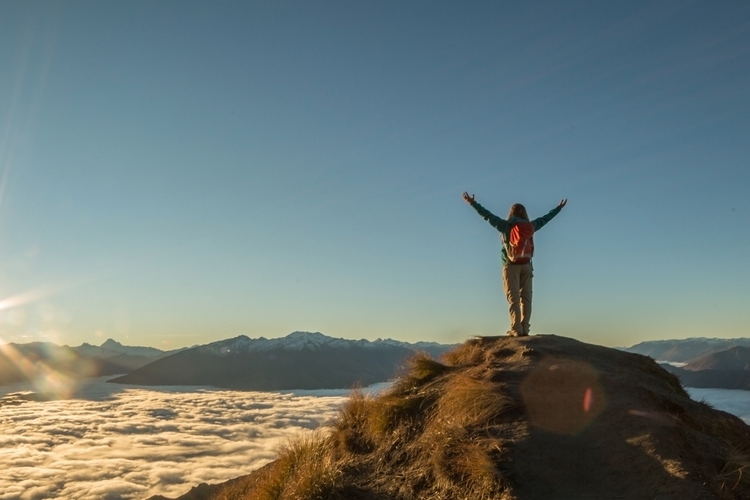 Infertility can seem insurmountable to those couples forced to wait indefinitely for their precious families. IVF offers hope, but the process brings its own challenges. Simonne Walmsley shares her very personal journey of overcoming the trials of IVF, and reaching the top of a life-changing mountain.

Everybody collects something at some point in their life. My child-self had a thing about small bottles and screwdrivers, and in my early twenties I went through a phase of collecting ticket stubs from every movie I saw. At the moment, I am fixated on coffee art and have loads of photos of flat whites with clever art in the foam. One of them has a heart in the froth that looks like a bulb of garlic… Or maybe an apple… But art is all about interpretation, isn't it?

Six months ago, I collected what I now affectionately refer to as Needle Mountain.

My first thought, on picking up from the clinic the pack full of needles and drugs I needed for my IVF, and then seeing them unpacked and sitting on my kitchen table, was "That looks really impressive!", quickly followed by "How can I possibly do this?" I also thought that I'd want to see the back of those needles as soon as possible. But, as it turns out, I don't think I'll ever get rid of them, because they mean too much to me. 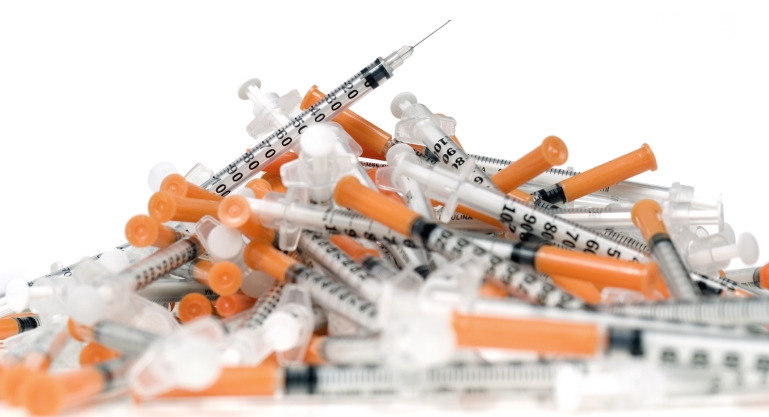 It's a funny thing to be sentimental about, but Needle Mountain is not only symbolic of finding out what I was capable of, it's also representative of my pride in achieving something incredibly difficult. It's a reminder of the many parts of my, and my husband's, long and painful journey through IVF. And my needle "collection" signifies that things are never entirely what you imagine they will be. I remember someone once saying to me that the greatest part of fear is anticipating the unknown. I can agree with that.

What I took away from my cycle of IVF differs significantly from what I imagined I'd feel. I remember that egg collection was very painful, and embryo transfer was horribly uncomfortable. I hated the scans, and both they, and the blood tests, caused me to worry all the time. I was very scared before procedures, and as I neared the end of each stage in the cycle. But those bad memories have become fractured and have dulled - much like the pain of labour, I'm told - and although I remember certain things from each stage in the cycle, my most vivid memories aren't the ones I thought I would have.

My first injection was momentous. What I remember is not so much the significance of starting out on what we hoped would be the last stage of our infertility journey, but, rather, jabbing at myself hesitantly several times, thinking that skin is a lot tougher than you'd suppose, and that nurses make it look so easy. Then I danced around my bedroom for a good 10 minutes with the needle poised above my stomach, hyperventilating a chant of, "I can't do it! I can't do it! I can't do it!" I knew that I had to do it, that there would be significant opportunities to be a wuss during this entire experience, but now was not one of them. Then my husband stuck his head around the door and said, very cheerfully and far too hopefully, "I'll do it!" So I just rammed the needle into my stomach, because there was no way I was having his big paws brandishing something sharp anywhere near me.

Early in my cycle of IVF, I failed to down-regulate, which was both disappointing and frightening. It was also a reminder that nothing is guaranteed, and each progressive step in IVF is dependent on the one before it going well. You can't take anything for granted. My opinion is that if you have to do something fun and cheerful like IVF, it should really just all go to plan, and I felt it was just a little bit (okay, a huge bit) rude that I'd fallen over at the starting blocks.

All that trauma aside, the thing I recall with the greatest clarity is sitting in the nurse's room, looking at the trigger injection she was about to give me. My first thought was that the trigger injection looked evil. Although, on the bright side, an extra 14 days of Buserelin needles (failing to down-regulate meant a trigger injection and having to restart the cycle) would make Needle Mountain much more impressive. Secondly, I thought that if I asked to keep the needle, the nurse would probably call security, but I really wanted it for Needle Mountain. I didn't ask to keep the needle.

I learned, through the way fertility patients react to each other, that infertility is such a unique experience and everyone's journey with it, their way of coping, is different. Although I felt quite strong and was able to be very open about our experience, I remember one woman I shared the waiting room at the clinic with more than once, who looked like she might shatter into a thousand pieces. She wouldn't smile or even make eye contact, and would turn her body away from me and anyone else who was in the room. It was such a stark contrast to the man who stopped one morning on his way out of the clinic with his wife, to wish everyone waiting good luck with their cycles. Or the woman whom I had watched wrangle a small child, again in the waiting room at the clinic, who turned back to me as she left and simply said, "It is worth it."

It's interesting too, in general, how many won't talk about their infertility. Those whom you may not even know are struggling or have struggled with infertility, but will reach out, buoyed by your strength when you put your own story out there. For many, infertility can be a lonely journey indeed.

As our cycle progressed, watching the pile of unused needles transfer to the pile of used needles, and seeing the empty vials of drugs, was incredible. I loved knowing that we were getting there, getting closer, making it through, and doing this difficult thing. And that the headaches, bruising and nausea, the restlessness, the blood tests and invasive scans, and the worry - it was all worth it, and every day we were one day closer.

I'm also convinced, more than ever, that chocolate brownies are magical and that as long as everyone has chocolate brownies, things will be okay. On the day of egg collection,  I arrived complete with a fresh batch of chocolate brownies to accompany my ready-to-burst ovaries, on the basis that it never hurts to ensure the people administering the pain medication are feeling well-disposed towards you. That, and it lightens the atmosphere somewhat to walk into theatre and see two out of the team of four still chewing. It also felt important to me to acknowledge, even in this small way, that we knew that what the staff do must be incredibly hard as well, because they do it time after time for so many frightened, heartbroken people.

Needle Mountain also brings to mind the doctor who declared, in the middle of my embryo transfer, when apparently there wasn't enough of something disposable on his equipment tray, "Now is not the time to be trying to reduce our carbon footprint!" This while I was lying there, in stirrups, with all manner of medical equipment inside me and an extremely full bladder, trying desperately not to pee, or laugh - because laughing would most certainly have led to peeing. I'm thinking that with all the needle packaging I'd thrown away during the IVF cycle, I had probably already wrecked the environment quite enough, so maybe he could make do with what he had.
My goal in starting our IVF journey was to try to be as positive as possible, and to do my best to make sure it didn't overwhelm me. I hoped that if I could manage that, it would lessen the negative impact it could potentially have on both my husband and myself. Doing IVF was difficult. To find that a natural process that should be easy, and seems easy for everyone else around you, is, for you, about needles and drugs and invasive medical procedures, is never going to be easy. And that's before you throw the emotional and physical side effects of fertility treatment into the cocktail and give it all a good shake.

Plus, I doubt anyone envisages being in another room entirely when their child is conceived, one parent slowly coming out from under pretty powerful painkillers, and the other closeted in a room with a sign saying, "If you're having trouble producing your sample, please ask a nurse," or words to that effect. It's not exactly a lazy morning in bed, although I can't argue that it's not memorable. No, it's not fair, and it's hard, and you really would give anything for there to be another way. But IVF was what we needed to do, so that's what we did. It was also about peace of mind, knowing that we were doing everything we could to have our child.

We were exhausted in the end, but that's the nature of the beast. At some point, it settles in your bones and you need to recover - physically, mentally and emotionally. I think my husband and I are still recovering, to an extent.

I really did think it would be a lot worse - but that is perhaps because we had a positive outcome. Things could have easily, and very sadly, been different for us, as they are for so many couples. I think that's why I felt it was so important for my husband and myself to still be ourselves and have a relationship outside of IVF - in case it didn't work, because it might not have, and even in case it did. I didn't want to wake up one day and wonder who that person was that I was sharing a house with, or find that we didn't have a life, or anything in common besides our infertility. At times, I did feel that life had become entirely about our infertility. On the flip side, it is a huge part of us, as we lived it for a long time, so it has to be acknowledged.

Last night I lay awake at 2am with my thoughts inwardly tuned, feeling my son kicking inside me, far too energetically for 2AM I might add, and I was reminded again of how far we have come. I felt the most powerful sense of…survival, I suppose you could call it. I thought of how our baby started, really with Needle Mountain, and of all the kindhearted people at the clinic who were involved in giving him life, and in giving my husband and me our family. I wonder if I'll ever stop feeling overwhelmed by how incredibly wonderful it all really is. Ed Hillary scaled Everest. I climbed Needle Mountain.