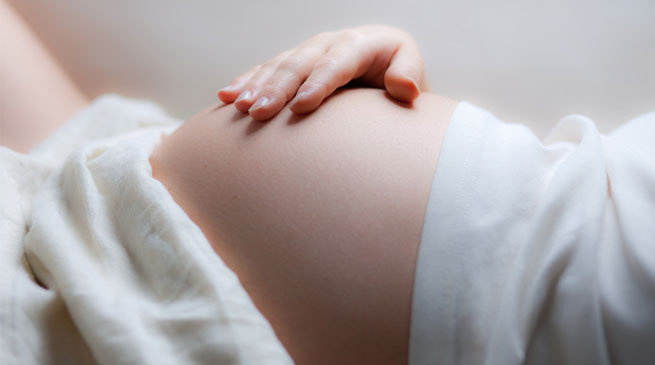 With the joys of imminent motherhood to look forward to, you no doubt have little time to worry about something that may (or may not) be a problem for you in the future - prolapse. Dr Anil Sharma explains.

Pelvic organ prolapse, or POP, occurs when the bladder or other pelvic organs drop from their normal position and push down the walls of the vagina. This happens when the muscles and ligament supports of the pelvic organs get weak or stretched. The word prolapse literally means "to slip forth". Organs that can be involved in POP include the bladder, the urethra (tube that carries the urine out of the bladder), the uterus, vagina, small bowel, and rectum.
It is estimated that around one in three women who have had at least one baby will end up needing treatment for POP. Since many women simply put up with these problems and think they are "just a woman's lot", the true extent of the problem may be higher.

What causes POP?
POP is most often linked to childbirth, which causes stretching and weakness in the muscles and ligaments. It can also lead to damage to the nerves of these structures.

You may also get POP if you have a total hysterectomy (where the cervix is removed as well as the uterus) at a time in your life when the vaginal and uterine supports are still strong. This is because this operation involves cutting the ligaments either side of the cervix, thereby causing more weakness in the supports.
POP can also be made worse by anything that puts excessive pressure on the supports of the pelvic floor (the lowest part of your pelvis just above the vagina at the lower limit of the tummy). These include obesity, long-lasting coughs, chronic constipation, and things like large ovarian cysts and fibroids in the uterus (fibroids are usually benign lesions in the muscle layer of the uterus).
Older women are more likely to have POP, not least because it has had more time to develop but also because of the reduction in oestrogen levels that occurs after the menopause. This leads to thinning of the collagen that is a great supporting tissue in our bodies. POP can also run in families.

What are the symptoms of POP?

How is POP diagnosed?
After asking questions about your symptoms and about any pregnancies or health problems, your doctor will likely do a physical examination (including a pelvic exam). He or she will then usually refer you to a gynaecological surgeon who has a special interest in the treatment of POP. Patients may need other tests to evaluate the prolapse further and these may include:

What to do in pregnancy and labour
If you are concerned about the effects of pregnancy and childbirth on your pelvic floor, plan to do pelvic floor exercises during and after pregnancy, and your antenatal class may be a good starting point to enable interaction with a physiotherapist. In terms of labour and childbirth, vaginal birth remains safest overall (unless there are medical reasons to have a Caesarean section).
While I appreciate the controversy about lengths of time for the second stage of labour (the time from full dilation to when the baby is born), it would seem logical that this is not excessive. In theory, the longer the baby remains in the birth canal, the higher the chance of damage to the muscles, ligaments and nerves of the pelvic floor. In general terms, the second stage should be around one hour for the first baby and less for subsequent births before the obstetrician is called. You should be proactive and discuss pelvic floor issues and plans for the birth with your lead maternity carer.

Treatment of POP
Decisions about treatment usually depend on how bad things are and what your symptoms are. If your prolapse is not severe and you are happy to adopt a conservative approach, you may just decide to let things be, and have another checkup if things "down below" get worse.
Pelvic foor exercises: If your symptoms are mild, you may be able to do pelvic floor exercises at home (see "Healing your pelvic floor". While these exercises will not reverse your prolapse, they can both help prevent it getting worse quickly and improve the results of surgery.
Lifestyle changes: Cutting back on caffeine (which acts as a diuretic) can reduce some of the urinary symptoms you may have associated with your prolapse. Losing weight or remaining in the normal weight range and regularly exercising can be a great way to prevent new prolapse, but beware of exercises that increase downwards pressure on your pelvis, such as squats. In fact, given the natural opening (the vagina) which allows women to birth a baby, squats are probably a particularly damaging exercise. While women with prolapse can carry on visiting gyms and exercising, some advice is useful. In general terms they should avoid any heavy lifting, but light weights for the upper body and legs are fine. Walking and cycling with care to limit any pressure on the pelvic floor are also likely fine, but more rigorous group cycling exercises and running are not a good idea. After surgery, a careful return to the gym is entirely possible.
It is also very useful to keep the bowels moving regularly. Eating a diet high in fibre is a useful start, but you may also need to see your family doctor for further advice. With regard to your waterworks, around 2-2.5 litres of fluid a day (with the odd tea or coffee) is reasonable, as dehydration is also not good for a regular bowel habit. This will have to be tailored appropriately if the waterworks are a problem as well. Smokers should do their very best to quit, as chronic coughs significantly increase the risk of prolapse.
Family doctors and gynaecologists will also frequently prescribe a course of oestrogen cream to insert into the vagina for post-menopausal women with prolapse. This is to try and increase the thickness of the skin in those areas to try and alleviate some of the symptoms and also to improve the healing potential of the area if surgery is being planned.
Pessaries: After appropriate discussion, a pessary (usually a plastic device) may control your symptoms. These are usually in the shape of a large ring and are placed inside the vagina to prevent the walls bulging down. These are suitable for women who do not wish to consider an operation or when other medical problems mean this is not possible.  The ring does need regular removal and replacement by your doctor (initially after six to eight weeks, and then every five to six months).
Surgery: Surgery is the main treatment option for pelvic organ prolapse, but is best delayed until after your family is complete; otherwise, the physical strain of childbirth will likely cause the surgery to fail. Surgery for POP has traditionally involved using the existing tissues of the vagina with incisional techniques and stitches that dissolve over time ("native" tissue repair). Since this involves around a 30% chance of recurrent prolapse (as the supporting tissues were damaged in the first place), newer techniques involve using thin woven sheets of polypropylene mesh to reconstruct the vagina. These techniques have reduced the recurrence rate of POP to less than 10%. However, the risks and limitations of using these meshes also need to be discussed with patients. Furthermore, the individual circumstances, including the severity of the prolapse, other health factors and risks of recurrence, all need to be considered.

You may want to consider surgery if:

Types of surgery for pelvic organ prolapse include:

Prolapse is being increasingly recognised as a real problem by society, and the old taboos of not talking about these "personal" problems are thankfully being broken. Modern management includes a range of safe treatments that have revolutionised this area and the newer surgical treatments are evolving rapidly.

Dr Anil Sharma is a specialist doctor in gynaecology and maternity. He is very involved in lectures and updates for family doctors and frequently takes part in debate regarding women's health and maternity for TV, print media, and radio. He believes that anxiety and fear can be conquered by knowledge. Anil immigrated to New Zealand from the UK in 2001 with his wife, Rachel, and he tries hard to be a hands-on and fun father (putting golf and cars on hold for the time being) to their three daughters, who were all born here.  For further information about Anil's practice, visit www.dranilsharma.co.nz

What is a birth doula?