Pregnant in paradise - Pregnancy care in the Pacific 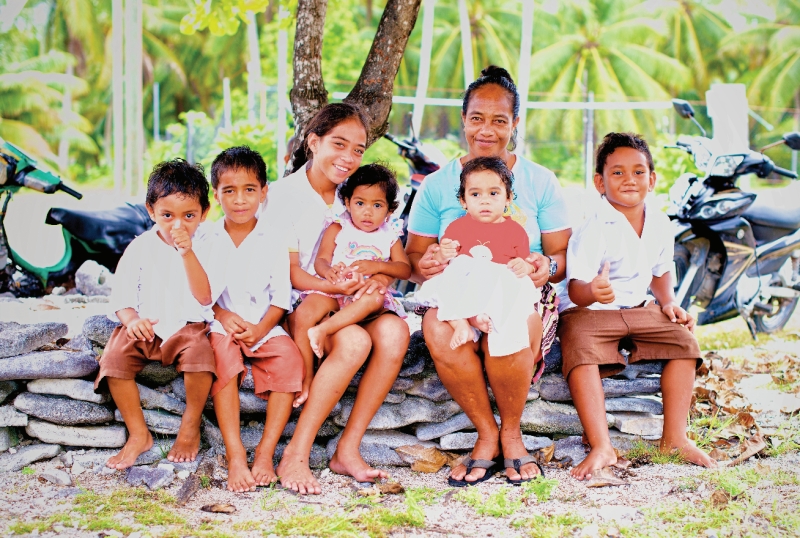 Obstetrician Dr Martin Sowter is a frequent visitor to the Pacific Islands, where mums can face a tough time having a baby.

Every year many tens of thousands of New Zealand families jet off to the Cook Islands, Fiji and other countries in the Pacific. For most it's a chance for a well-earned break. For many of you reading OHbaby! it might also be a last holiday before becoming parents.  The resorts will often be upmarket and the water will always be clear - but have you ever wondered what pregnancy care is like for the local women you meet?

Over the past eight years I've been a regular visitor to the Cook Islands on NZAID-funded trips to work with the doctors and midwives in Rarotonga and the outer islands. I've also had the chance, through the Pacific Society for Reproductive Health, to meet many medical and midwifery colleagues working in Vanuatu, Papua New Guinea, the Solomon Islands and Fiji. All of them face challenges when providing pregnancy care that make our working lives as doctors and midwives in New Zealand look very comfortable.

It's an unwritten rule that the medical facilities in any developing country will be several times less well provided for than their tourist infrastructure - and the Pacific is no exception. Doctors and midwives working in these countries face many of the difficulties their colleagues in all low and middle-income countries experience, but the isolation and small size of many Pacific nations pose particular difficulties.

Sobering statistics
Statistics vary hugely across the Pacific - from the Cook Islands, which hasn't had a maternal death (a woman dying in pregnancy) in 10 years, to Papua New Guinea (PNG), where four women die each day from a complication of pregnancy and child birth.

Currently in PNG, women have about a one-in-15 lifetime risk of dying of a complication of pregnancy, compared with about one in 6000 in New Zealand. As in every low-income country, bleeding after child birth, infection, obstructed labours with no access to Caesarean section, uncontrolled pre-eclampsia and high blood pressure are the biggest killers.

The statistics in the Pacific are similar for perinatal deaths (babies dying in late pregnancy, labour or the first few days of life) with some countries reporting neonatal death rates not far above New Zealand. However, in others, particularly PNG, as many as one in 20 babies are lost in labour or shortly after birth. This equates to one or two newborn babies dying every shift on the delivery unit in Port Moresby, PNG's largest city.

Back in 2000, member countries of the United Nations adopted eight key "millennium development goals" to be achieved by 2015. These covered areas such as access to clean water and education. The fifth goal of the "millennium development" is women's health. The target is to improve maternal health, including: reducing the number of women dying from complications of pregnancy by three quarters; to increase the number of women delivering with  a skilled birth attendant present, and for all countries to provide universal access to reproductive healthcare.

With less than three years to go until 2015, of all the millennium development goals, it is the pregnancy and childbirth goals that have made the least progress in developing countries.

In PNG, the number of women having to deliver their baby with no midwife or birth attendant present has also risen from less than a third to nearly two thirds since 2000. Its maternal and perinatal mortality rates are now only just behind Afghanistan and the worst of Sub-Saharan Africa.

What's the problem?
One problem all countries in the Pacific face is how to maintain and support staff working in very isolated settings. Maintaining skills and morale is often impossible when one or two health workers might be working in isolation for months at a time.

Transferring ill patients to a larger centre is often close to impossible. For some more prosperous countries, like the Cook Islands, women from outlying islands are usually transferred by boat or plane in the last few weeks of their pregnancy to deliver at the hospital in Rarotonga. Most of the outer islands have hostels in Rarotonga for young mothers, and many have family on the main island. This is an expensive approach but one which means that the chances of a baby being lost in labour or shortly afterwards are similar to New Zealand. It also reduces the risk of having to send the country's only naval patrol boat or a charter fight to the country's most distant islands some 1200km north of Rarotonga to collect an unwell woman or newborn.

Most Pacific countries can't afford to take this approach and Islanders have to use the "40 horse power" option, taking a woman on a journey of many hours down river or over open seas in a tinny to the nearest island with an airstrip or medical centre.

On a recent course in the Solomon Islands, all the midwives and doctors I met had hair-raising tales of transporting pregnant women who were bleeding or dying from infection in small boats from one of the country's many small islands to a larger centre where there might be access to medical care.

Staff shortages
In larger centres in the Pacific, doctors and midwives struggle with very high workloads. Most Pacific countries are very short of medical and midwifery staff and the impossibility of being able to take time off makes it hard to maintain morale. For example, the Solomon Islands, with a population of nearly 250,000, has only two specialist obstetricians based in Honiara (compare that to Auckland with nearly 100 obstetric specialists serving a city of little over a million). The Cook Islands manages on just one specialist who can be permanently on call for months at a time.

All countries in the Pacific face the continuing loss of skilled personnel to Australia and New Zealand. A few return with new skills, but most are lost to the local workforce forever - and in  a small nation this can lead to months of disorganisation as clinics and hospitals struggle to replace key staff. The availability of training for doctors in the Pacific is always fragile, with medical schools in Fiji and PNG struggling to retain staff and maintain a curriculum. For midwifery training the problem is even more challenging, with midwifery schools in several Pacific countries closing. Students now have to relocate to Fiji for training. In PNG no new midwives have graduated since 2001, and it is only in the past two years that a group of midwives from New Zealand and Australia have sought to help the country re-establish its midwifery school.

The internet and mobile phones have revolutionised communication in low-income countries just as much as they have in New Zealand, but sourcing, purchasing and delivering medical supplies and drugs still need an old-fashioned delivery service. Nearly 80% of Pacific Island people live in rural areas - many of them very isolated.

In countries with larger islands such as PNG and the Solomon Islands, this might involve a trek of a couple of days, or others (such as the Cook Islands and Vanuatu) long journeys by boat.

Earlier this year I visited Nassau in the northern Cook Islands with a medical team, and we were on the first boat to visit in five months. Not surprisingly the shelves in the medical centre were bare.

Teenage and adolescent pregnancy rates in the Pacific are also some of the highest in the world, at nearly five times the rate in New Zealand, which itself has the second highest teenage pregnancy rate in the developed world. These rates reduce the chance of young women finishing education or progressing into jobs.

So don't feel at all bad about enjoying a well-earned antenatal mocktail in Port Vila or by Muri Lagoon, but do think about supporting some of the organisations helping pregnant women and the people who care for them in the Pacific.

How you can help

Martin Sowter (BSc MB ChB MD FRCOG FRANZCOG) is a specialist at Auckland City Hospital in the fertility and menstrual disorders clinics and also works privately with the specialist team at The Auckland Obstetric Centre. Over the past six years he has regularly visited the Cook Islands with NZAID, helping with gynaecological surgery. Martin is married to Alison, an eye surgeon, and has two daughters.