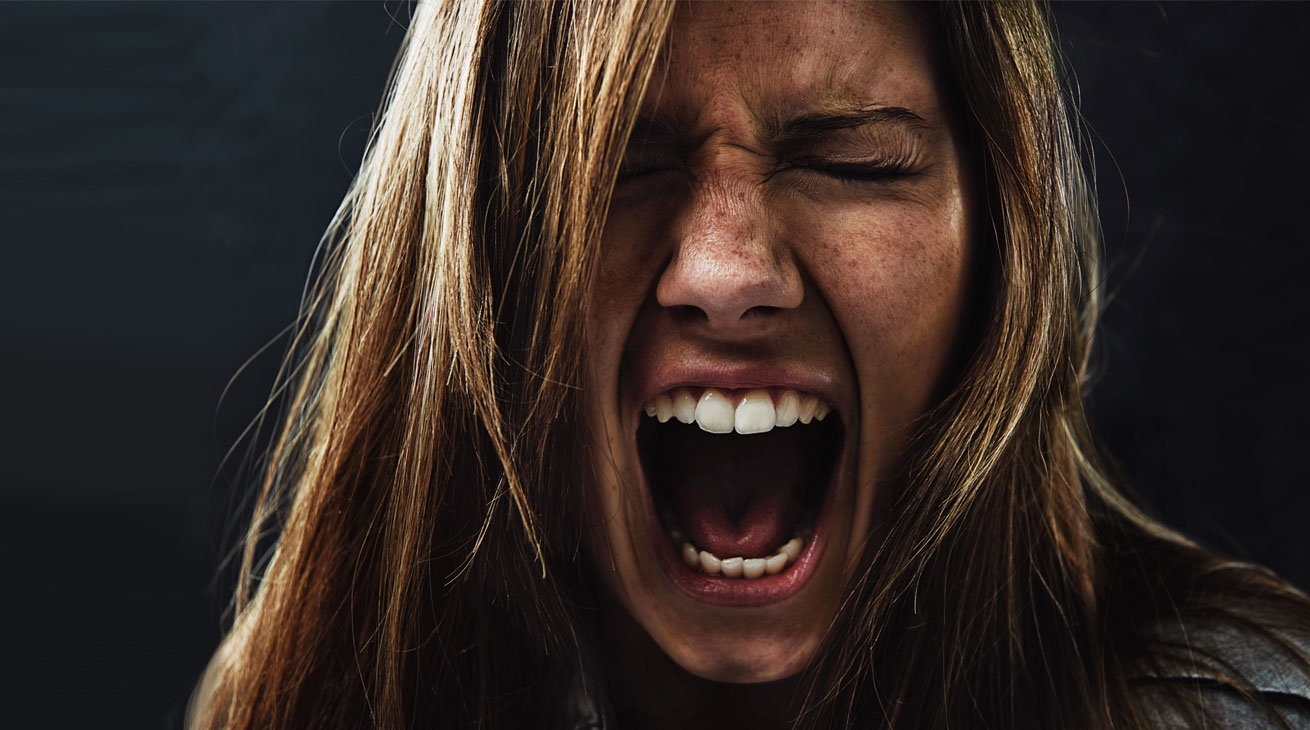 Don't be shy, moaning like a cow or roaring like a lion can make your birth easier and lessen the pain, writes Sarah Tennant.

What sound do frogs make? If you answered with a croaky "ribbit, ribbit", here's an interesting factoid for you: Most frogs don't sound like that at all. In fact, various species of frogs can bark, cluck, grunt, chirp and whistle. We think frogs "ribbit" because of one species - the Pacific tree frog - which happens to hang out in California... as in Hollywood... as in, the place where movies are made. Yes, one too many sound guys nipped outside with a microphone to capture background noises for the latest jungle epic, and the popular perception of frog sounds was altered forever. Now, what sound does a labouring woman make?

You see where I'm going with this? If you haven't ever witnessed a real birth, your idea of the noises of labour likely comes from Hollywood. As an avid critic of on-screen birth and possessor of a hitherto useless degree in film, I'd like to hypothesise that Hollywood birth noises come in four categories.

The first is the scream of anguish  - the kind that a woman emits as she is wheeled in on a gurney. The screaming is a basic, out-of-control response to pain, and is meant to convey that birth, haemmorhage or full-on abdominal explosion is imminent, requiring the attractive medical staff to start being awesome, stat.

The other three categories are all comic - after all, what's funnier than a woman in labour? There are the "You'll never touch me again!" screams of women who spend their contractions hurling abuse at their partners for impregnating them. There are the large, ethnic wailings of large, ethnic women, who must be tactfully hushed up by the staff for the sake of the other patients. And there are the "get me the blankety-blank epidural NOW!" screams, so terribly funny when the mother has previously stated she wanted a natural birth (har har har).

Now, like the Pacific tree frog, these sorts of noises do certainly exist in the real world. But they paint a very limiting and distorted picture of the role of sound in birth. Plenty of women do not scream, per se, during childbirth; but very few are silent. A quick Google search reveals women describing their birth noises as "primitive", "mooing", "a stag at first frost", "a dying moose", "an air raid siren",  "a snorting horse", "a cow being strangled", "something from National Geographic", "a constipated elephant" or, how poetic we women are!, "the sound of a cat being run over by a trucker dropping the F bomb".

Embarrassed?
Sadly, many women are embarrassed about the weird and wonderful noises of birth. The undignified, primal, sometimes sexual sounds labour can produce are  a far cry from how most of us were brought up to behave, that is keeping quiet, not causing a fuss and putting mind over matter.

Some women worry about disturbing the neighbours or the other labouring women down the hall. Others try to keep quiet for fear of upsetting their partners. A few are horrified when tactless hospital staff ask them to keep it down. And many women genuinely believe they have given birth silently, only to find out later via a raw throat or a loving husband that they were shouting the entire time.

It doesn't help that our society has absorbed the notion that good birthers are quiet birthers. After my last birth, which I spent deliberately vocalising, according to Ina May Gaskin techniques with low, open-throated tones, my husband said with a hint of amusement - or was it disdain?: "You were a bit noisier that time." I immediately became defensive, assuring him in no uncertain terms that the noises I had emitted were the conscious product of research, not... well, a natural response to severe pain. (And what would be wrong with that, exactly? Nothing, but there you go.)

At least he didn't mock my birth noises - I know a few husbands who have. And while I've heard partners say "She was great - never made a sound," I can't recall ever hearing, "She was fantastic  - roared like a lion the entire time!"

That's a shame. Because, having had a quiet birth and a louder one, I know first-hand that "quiet" does not mean "coping", and "loud" does not mean "out of control". It's time for us to ditch the stigma of noisy birth and begin to appreciate what a marvellous tool sound is for labour.

Open up
The birth sounds usually recommended in antenatal classes are low-pitched, open, vowelly sounds: "oooh", "ohhhh" and "ahhh". These noises keep the throat open and loose, which in turn helps the cervix dilate. Most women instinctively tense up against the pain of contractions, effectively fighting against the cervix's desire to expand. Dropping the jaw and keeping the throat open works,  but it's easy to forget to do it in the  heat of the moment. So focusing on a sound which requires an open throat is a handy technique. When it works, labour progresses faster and is less painful.

Some women add a meditative or hypnotic element to this technique by selecting birth-related words: "open, open", "down, down" or "soon, soon". At hypnobabies.com slowly intoning "Oooopen" or "Peeeeace" is recommended. Sadly, I couldn't do it and take myself seriously. I tried one "ooooopen", felt like an idiot, snickered, and went back to my generic "oooh" sounds. With all respect to Lennon, I never gave "Peeeeace" a chance.

For trained singers, singing a low-pitched song combines the benefits of an open throat with a mental distraction akin to meditation. Singing during childbirth came to public notice thanks to a YouTube clip of American mum Temple Cundall doing a lovely rendition of Psalm 23 through two contractions. More often though, singers find themselves creating a tuneful moan - a cross between whale song and Gregorian chant - which may not sound so great on the birth video, but is hypnotically helpful at the time.

Benefits of swearing
While it may not combine too well with psalm-singing, there's also decent medical evidence in favour of swearing during labour. Using naughty words gives you a tiny rush of endorphins, pleasure hormones, which counteract pain.

The theory was tested on an episode of English presenter Stephen Fry's Planet Word, a show about the English language. In an episode devoted entirely to swearing, Fry plunged his hand into ice water for as long as he could bear the pain. The first time, he was allowed to say a control word ("functional"). The second time he used an Anglo-Saxon expletive (yes, that one). Sure enough, the results confirmed what Keele University researchers had found in their study. Swearing allowed him to keep his hand in the water considerably longer, while perceiving the pain as less severe.

According to the researchers, the profanity/pain relief connection is particularly strong in women. It does, however, depend on the titillation factor. Women who routinely cuss like sailors won't get the same rush of endorphins as women who swear only as a last resort. In other words, you can now admonish your daughters, "Save that word, darling, you'll need it for childbirth."

Making noise during labour has one other benefit - it lets your midwife know what's going on. Experienced midwives can detect changes in women's vocalisations during labour, for example the differences between an "I'm working very hard" noise and an "I'm scared and need reassurance" noise, or the panicked sounds that tend to accompany transition.

After my first, nearly silent birth, my midwife mentioned she had had a hard time telling when I was having contractions, and assumed that I was coping very well (I wasn't). With my second birth, I noticed my own vocalisations becoming less controlled and more plaintive when I hit transition, and my midwife was able to respond with a few reassuring phrases just when I needed them.

So is any kind of noise good during labour? Not in all circumstances. High-pitched screaming closes up the throat, tensing up the sphincters of the body, which includes the cervix. Too much chatting during labour may distract some woman from entering the silent, focused head space that can be necessary to make labour progress. And roaring loudly during the pushing phase can direct energy away from the pushing. This can be a good thing if the baby is crowning very quickly, or a bad thing if the mother is exhausted during a long second stage.

In general, however, noise should be treated as a safe and natural form of pain relief. Most importantly, you should feel comfortable about making as much noise as you need to. That could mean banishing the videographer, your mother-in-law or the trainee midwife from the birth room. It could mean getting your partner to solemnly swear never to publicly compare your birth noises to the call of an amorous water buffalo. Or it could mean prepping your kids for some loud noises, as Leaves of My Tree blogger Whitney Canales did: "We had been watching home birth videos on YouTube. He had gotten used to watching them and we talked about how mamas "roar like dinosaurs" when their baby is coming out. We would roar together and talk about how "Austen is coming! Austen is in Mommy's tummy, but she is going to come out, and Mama is going to roar like a dinosaur!" .... During my labour, if he ever got worried about why I was moaning and crying (and roaring) through contractions, I was able to separate myself from the pain momentarily and calmly remind him (in a slightly chipper voice, even) that Austen was coming and Mommy was just roaring like a dino."

Above all, never apologise. Weight-lifters don't apologise for their grunts and roars and neither should we. If making noise helps you direct your labour, hasten your dilation and, as my sister-in-law put it, "shout louder than the pain", that's superb. If we can tear up at a newborn baby's first cry - a sound not of weakness, after all, but tenacious life  - we should be similarly awed at the cries of a woman powerfully pushing her baby out.

Plus, it might encourage hospitals to put decent soundproofing in their delivery rooms. Seriously, what's with that?

Sarah Tennant lives near Hamilton with her husband and two children, Rowan and Miles. She recommends saying "ohhhh-aaahhh-ohhhh" and flapping your wrists during contractions, even though it makes you look a tad demented.