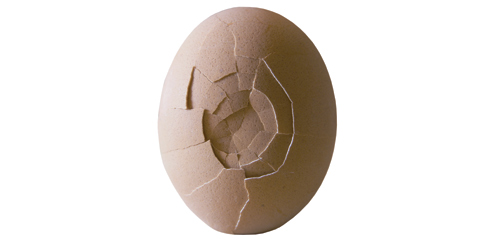 Childbirth is supposed to be an empowering, amazing experience, right?
The reality is, for some women, giving birth does not go the way they hoped and planned, and this can be extremely traumatising. Sarah Tennant breaks the silence on traumatic birth and how to cope.

I have always been faintly amazed by the matter-of-factness with which women describe their birth experiences. "By 9pm, the contractions were three minutes apart!" just doesn't do the throes of labour justice.
My own birth experience, factually speaking, is similarly bland. On St Patrick's Day 2008, I was induced for fulminating pre-eclampsia. 18 hours after prostaglandin gel started labour, Rowan was born with a nuchal hand presentation. Shortly afterwards, my cervix clamped down on the placenta, which had to be removed with forceps. My blood pressure stabilised, I was transferred to a birthing centre, and underwent an unexciting recovery. Rowan was healthy and perfect; all was well.
Except it wasn't. Months after Rowan's birth, I was hesitating at my computer screen, wondering if it was over-dramatic of me to google "birth trauma". My memories of the experience were of fear, panic, and disappointment. I remembered crying into my husband's jacket when I was told off-handedly that my planned, idyllic home waterbirth was out of the question. I remembered my first-ever pelvic exam, by a doctor who didn't seem to care that he was hurting me. I remembered contracting in the dingy, dreary Waikato delivery room. That wing was being renovated - piles of lumber lay around, and I contracted to the soothing accompaniment of chainsaws. I remembered hiding my panic and desperation under my family's trademark stoicism, and feeling like I was falling apart while my midwife commented on how well I was handling it. Worst of all, in defiance of platitudes, I remembered the pain...
Now the thought of having another baby brought on panic. I clicked "Search".

Reaching out
Only those familiar with the internet can appreciate how  a medium so supposedly impersonal can provide such a wealth of support, emotion, and personal experience. Through sites such as TABS (Trauma and Birth Stress), ICAN (International Cesarean Awareness Network), BirthCut and Birthtruth.com,  I discovered that I was only one of thousands of women
affected by bad birth experiences. What's more, as I started to discuss the issue among my family and friends, it turned out everyone knew someone who'd suffered a traumatic birth. Fascinated, I absorbed dozens of stories - from my neighbour, my mother-in-law, my mother, through to women on the other side of the world. Common threads
The stories ranged from medically traumatic births to textbook deliveries, C-sections to homebirths, supportive birth teams to abusive obstetricians. Yet throughout the varied experiences, several common elements became apparent.
Many women described a profound sense of being cheated out of the moment of birth - the first sight of their naked, gooey baby emerging. Marie* was so exhausted from blood loss that she no longer remembers the moment of her daughter's birth; Heather described herself as "out of it" on pethidine and pain; Jill missed the birth entirely due to an emergency C-section. Mothers who are presented hours after the birth with a bathed, swaddled baby often find it difficult to believe the baby is really theirs. This distancing, coupled with feelings of resentment towards the baby for putting them through "birth hell", can often interfere with bonding - as can the loss of an immediate breastfeeding relationship, which often accompanies traumatic or surgical births.
Loss of control is another major component of birth trauma. Whether a woman plans a hospital birth with all the bells and whistles or a back-to-nature homebirth, unexpected complications, interventions, or even simply pain can cause a feeling of panic and disorientation. Many traumatic birth
stories use terms like "uninformed consent", "coercion" and "unnecesarean" to refer to their births. A TABS (Trauma And Birth Stress) survey conducted in 1999 said New Zealand women listed loss of control, multi-handling (care provided by several different people throughout labour), being laughed at, and loss of dignity as major reasons for birth trauma.


Lasting impact
Frequently, the impact of a traumatic birth reveals itself  in postnatal depression or post-traumatic stress disorder. Postnatal post-traumatic stress disorder (PTSD) is thought to affect a disturbing 7% of women. A condition frequently associated with war veterans, PTSD manifests in symptoms such as fashbacks and nightmares of the traumatic event, partial amnesia, panic attacks and avoidance of situations or places which trigger traumatic memories. Women with postnatal PTSD may avoid visiting the doctor, feel shaky when they see pregnant women or babies, or find themselves replaying the events of the birth over and over in their minds.
Sadly, another common trend in traumatic birth stories is a lack of support from partners and peers. Marie reflected a common perception when she said her husband was supportive, "but he didn't really get it". Many women find their partners initially consoling, but less supportive of the long-term emotional, physical, and sexual ramifications of a traumatic birth.
Other women can be even less helpful. Jill's mother found it difficult to comprehend that a c-section was not an ideal birth. Other women found their trauma dismissed by one-upmanship: "My labour was twice as long as yours and I was fine", or "It could have been worse, look how much blood Carol lost."  Such attitudes fail to engage with the subjectivity of trauma or acknowledge differences in birth ideology and personality which can shape a woman's perceptions of her experience. Healing the trauma
A few weeks after her daughter Sara's birth, Marie found herself writing her birth story in a journal. Although she has no plans to read it again - over three years later, the trauma is still too fresh - the act of writing helped her begin to process the birth. She is not alone. Confessional and often eloquent birth stories form a large part of traumatic birth resources.
Other women turn to music or art. The post-caesarean support site Birthcut features some provocative artwork, ranging from the poignant to the disturbingly graphic - a c-section incision drawn as a sad face, a woman being sliced open with a scythe.
Many of these stories and pictures illustrate an important part of the healing process: "birthrage". This is raw, primal emotion directed at anything from the medical system to a woman's own body. Birthrage can easily become destructive, manifesting as obsessive emotional investment in others' pregnancies and anger towards those who make the "wrong" choices. However, many women channel their anger into birth reform, antenatal education, or post-partum support. Some provide legal information for women who are victims of malpractice;  a surprising number become doulas or even midwives, in the hopes of providing other women with a better birth experience.
"Debriefing" after a traumatic birth is another valuable healing tool. Many midwives talk through the birth with the mother afterwards, comparing impressions and discussing any interventions that occurred. Support groups are another useful tool - the simple fact that other women have been through similar experiences can go a long way towards validating birth trauma. In her insightful article "You Should Be Grateful", Gretchen Humphries points out that the "all that matters is a healthy baby" attitude causes many mothers needless guilt over their own trauma. Although a healthy baby is certainly important, the mother's physical and emotional health is not a trivial concern; nor does it mean she is ungrateful for her baby.
Krista Scott of Ican emphasises that the birth and baby are two separate things, and you can hate the one without ceasing to love the other. As she puts it, a bride who slips and breaks her neck on her wedding day doesn't love her husband any less because she's angry about the accident.
But it's not all "touchy-feely" - professional counselling and psychotherapy are also recommended. Another option is medication. Many postnatal depression and PTSD sufferers have experienced previous depression or mental illness, and can often be prescribed breastfeeding-friendly drugs by their GP.

Next time
For some women, the trauma of birth spells the end of childbearing. Jill opted for a tubal ligation. Faced with the desire for more children, Marie consented to get pregnant  "only on the condition that I could have an elective Caesarean". For those who do end up having more babies, the pregnancy may be dominated by the desire to have a "healing birth" - usually a birth experience diametrically opposed to the previous one. In Marie's case, a planned Caesarean finally helped her appreciate the wonder of birth. Many women, however, choose a less medicalised model such as homebirth or unassisted childbirth. Indeed, changing as many aspects of the birth as possible - location, care providers, and support people - is often recommended, even if these elements were not the cause of the trauma.
Birth experts are divided on the subject of birth plans, the crafting of which often dominates a woman's third trimester. Pam England and Bob Horowitz, authors of Birthing from Within, feel that birth plans foster a false sense of security, and that the very necessity of avoiding interventions may cast doubt on hospital births altogether. Others recommend the birth plan for crystallising a woman's own desires and priorities, but caution against becoming too rigidly attached to every detail.
For me? There will be a next time. Mind you, I'm not fantastically keen on  the idea. But deep down, I know it will happen. And that's a start.

Sarah Tennant lives in Hamilton with her husband Dominic and daughter Rowan (one).