Three mums tell Sarah Tennant how, once they’re on their way, even earthquakes, power-cuts and fractured bones won’t stop a baby’s arrival!

And they’re right, of course – perhaps more right than they know. Because when people say “birth is unpredictable”, they’re usually referring to the medical side of things. A baby could suddenly decide to turn breech, labour could take twenty minutes or two days, you might have bad labour pain or no pain at all ... that sort of thing.

But a bigger truth is that life in general is unpredictable. And life, as we all learned this year during a certain pandemic, doesn’t stop in its tracks so we can birth in peace.

The things that interrupt and shape women’s birthing stories range from the sublime to the ridiculous. Mother-of-six Melanie Beaven once had her labour stall for a few hours after she had to evacuate from the birthing centre due to a fire alarm! Other women have found themselves labouring through traffic jams, healthcare strikes, heat waves, uninvited guests ... even, in the unenviable case of my friend Laura, pneumonia. I can personally un-recommend giving birth in a maternity wing as it’s being renovated – intermittent power tools not being quite as soothing as, say, bird song.

But as they say, when life gives you lemons, you still have to go ahead and have the baby. Here are the stories of three curve ball labours and the women who coped with them!

There’s an apocryphally Chinese curse that simply says: “May you live in interesting times.” The obstetric equivalent, perhaps, is, “May you have an interesting birth story”. The birth of baby Everest definitely counts. He was born on Christmas Eve, 2011, in Christchurch: that is to say, in the middle of a whole bunch of earthquakes.

Even without the shifting of tectonic plates, Charlotte’s birth story is impressively gruelling – a 48-hour induction that ended with an emergency Caesarean-section for foetal distress, and a blue baby who took an agonisingly long time to breathe.

But what made the experience go from difficult to surreal were the earthquakes that rocked the hospital. The first happened just as Charlotte’s midwife was about to break her waters. The room shook, the midwife held onto Charlotte on the bed, and they all decided to wait for a bit before trying again. But one hour later, as the midwife was making a second attempt, another quake hit.

Despite the shaking, the midwife did manage to rupture the amniotic sac without disaster, and labour progressed ... kind of. Charlotte couldn’t shake a feeling of dread and anxiety though. “I kept thinking, ‘It’s going to happen again, it’s going to happen again’.” Her saving grace was her “incredibly calm” partner Stacey, who did his best to help her focus and relax.

Whether the stress of the earthquakes was a factor or not, Charlotte’s labour didn’t progress; 48 hours on, she was exhausted and the baby was starting to show signs of distress. She was wheeled into the operating room – conscious, though bleary from exhaustion – and baby Everest was delivered by C-section.

However, to Charlotte’s horror, she didn’t hear the baby cry. Everest was briefly shown to her, but he was blue and not breathing. The staff didn’t say much as they rushed him to the other side of the room. Some more surgeons were preparing to sew Charlotte up, but everyone was tense, waiting for the baby to cry – and that’s when the third quake hit.

Charlotte remembers crashing and thuds, and the splashing of what she imagines was a saline IV hitting the floor. Lying exposed, and numb from the waist down, she could only watch as staff members threw themselves on top of her to protect her from debris and steady the table. Surgeons grabbed to try to save sterile instruments from falling on the floor.

And then it was over, and as if in response to this indignity, Everest let out a cry.

Eight years later, his mum describes Everest as stubborn, intelligent, never giving up, and going to go a long way. Everest loves hearing the story of his birth, which apparently made quite an impression on hospital staff. When Charlotte returned two years later to give birth to Everest’s younger brother, a staff member approached her and asked, “Are you the earthquake
baby’s mum?”

Looking back, Charlotte admits that it was a pretty traumatic experience – not the least because she ended up in hospital on Christmas Day, eating “what I hoped was turkey”! She does, however, have glowing praise for the hospital staff. “They were so protective; they didn’t even think about themselves, just keeping me and my baby safe.”

In Tauranga mum Talia Evered’s case, a third-trimester accident put the kibosh on the calm, natural birthing centre water birth she had planned.

She was 34 weeks pregnant when a quick journey from the house to the garage ended in disaster. She remembers, “I walked out onto a damp deck and awkwardly fell. I didn’t trip. I didn’t slip. I just randomly fell sideways.” Talia soon discovered she had an impressive spiral break in her ankle – a type of injury usually acquired by snowboarding mishaps – and required surgery, a plate and six screws in her ankle, and a bright pink cast extending up to her knee.

Stuck on the couch for the next few weeks, Talia had time to come up with a new birth plan. Clearly a water birth, was out. Thinking creatively, Talia bought a knee scooter and planned to use it as a support to labour upright.

A bigger problem, though, were the blood thinners she was now injecting every day. Because blood thinners raise the risk of haemorrhaging during birth, Talia was forced to birth at the hospital instead of the birthing centre. Birthing would be heavily monitored, with Talia immobile, and she was told a C-section might be risky, depending on the timing of her latest injection.

“I ended up on my back, my pink cast in a foot hold and birthing that way. It wasn’t my ideal at all but it was a very straightforward, natural (just gas and air) and relatively quick labour that had no complications, and the cast never actually got in the way.”

And Talia is philosophical about it all. “I just took it as it came and went with it. I was safe, Quinn too, and I still loved my birth with him and how we got through that tough time together.”

Chloé-Ruth Zanders was equally philosophical about her own birthing hiccup. Her lovely home water birth in Te Pahu was only slightly interrupted when a nearby car crash took out the power – and with it the ability to heat the water for the birthing pool.

Chloé-Ruth’s husband started heating water on the wood-burning stove. Her mother hunted out the candles – originally purchased for ambience, now coming in handy as an actual light source! Chloé-Ruth vaguely remembers the others discussing what to do as it began to get dark, but she was too deep into ‘labour-land’ to feel stressed. “I remember thinking, ‘That is somebody else’s problem!’” she laughs. “I was just really focused on the contractions.”

As luck (or the power company) would have it, the electricity did come back on in the end, and Hāmiora Zanders was born in a lovely warm pool – in fact, the wood stove ended up being a much more efficient water-heater than the ‘proper’ califont!

Is there a moral to any of these stories? If there is, I don’t think it’s ‘have a contingency birth plan in case of earthquakes’ – although, if you live in Christchurch that might not be a bad idea. Preparing for everything is just impossible (again, see the many and varied events of 2020.)

Nor is it to throw out the birth plan altogether. As former US president Dwight D Eisenhower said, “Plans are useless, but planning is indispensable”. Knowing the general shape of how you want your birth to be can help you try to achieve that shape, even when the specifics are falling apart.

Perhaps the key is to make plans that are floating, not fixed. Like any other occasion, from a wedding to moving house, serenity is found in accepting that things will go wrong, and that many of them ultimately won’t matter and will make for a great story in years to come.

It’s also a good idea to factor the real world into your birth plans. Are you giving birth in the month you usually get terrible hay fever? Better pack antihistamines. Is your birth partner chronically late? Is there a huge concert venue or rugby stadium between you and your birthing location? Maybe make a note for someone to check traffic and alternate routes before you leave, just in case. Does your husband have a bad back? Then don’t count on him being able to massage your spine for eight hours straight during labour.

In short, expect birth to be figuratively, as well as literally, messy. And come to terms with going into labour when your primary midwife is on holiday. That’s another universal constant.

Sarah Tennant has given birth four times during no natural disasters whatsoever. She did once get into a minor car crash on the way to the birthing centre, but that was mostly funny and, for the record, her husband’s fault.

AS FEATURED IN ISSUE 51 OF OHbaby! MAGAZINE. CHECK OUT OTHER ARTICLES IN THIS ISSUE BELOW 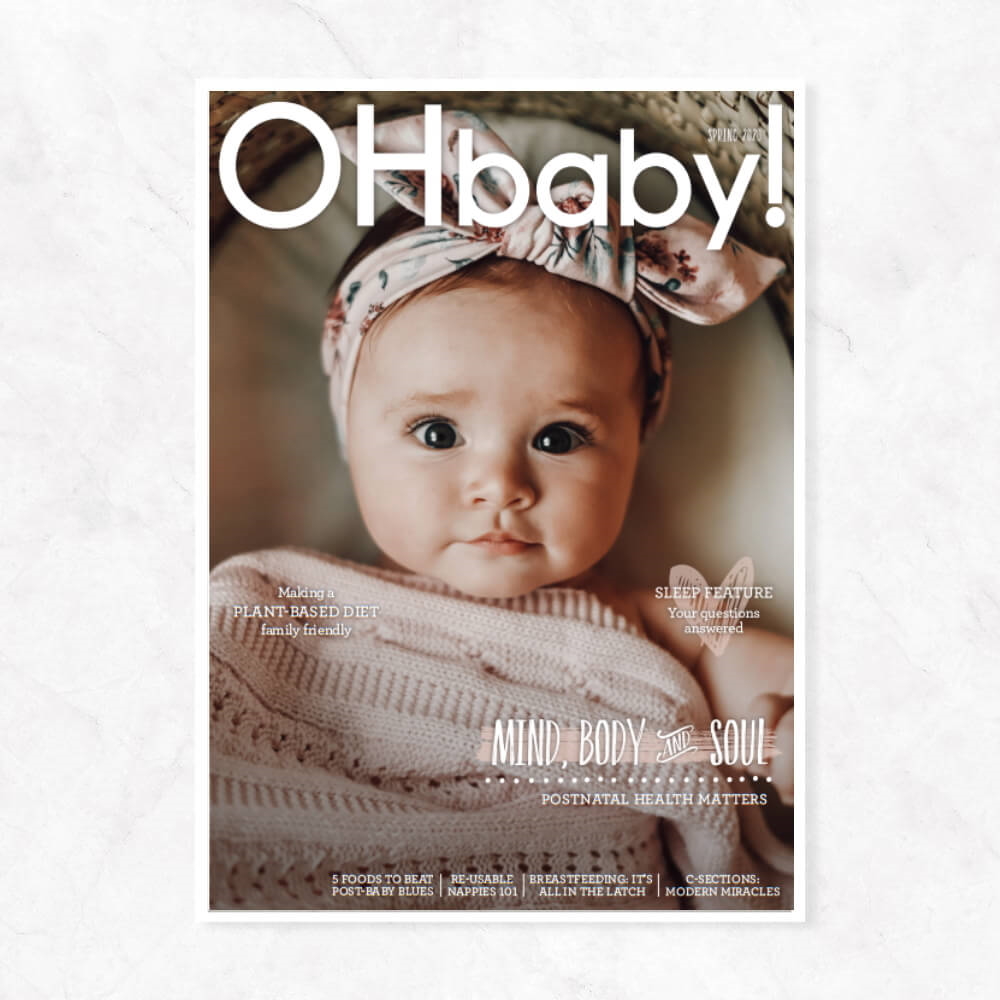 DIY: stylish side table for any room Toddler fashion for all seasons