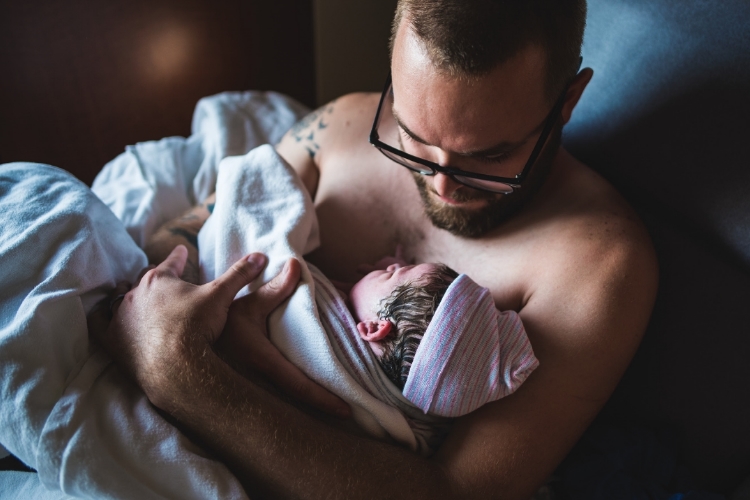 The reality of labour and birth can be a bit of an eye-opener for all involved, but especially dads-to-be. Hannah Davidson passes on some advice from fellas who have recently been there.

Although I had warned him that things might get primal, nothing had prepared my husband for his wife making the distress signals of a bovine in peril. It was not the dream birth we’d envisaged which, specifically, was me murmuring gently in the birthing pool with my husband dabbing my brow and murmuring thoughtful words of encouragement. But as many people will attest, fist time round you might not get what you’d planned for.
After many, many hours of labour which culminated in a forceps delivery, we had our son safely in our arms and my sense of humour had returned. It was then my husband felt safe enough to say: Firstly, he couldn’t believe his fist-born son had made him miss cricket, and secondly, next time round he’d pack a picnic.

Spare a thought for the dads in the delivery room, who’ve probably spent less time watching One Born Every Minute than their womenfolk and are likely ill-prepared for what they are about to experience and, more significantly, observe. For our bliss fully unaware friends, we share the wisdom of three dads who have been there, and a midwife who’s seen it all. Their resounding advice is just roll with the punches.

JUST BE THERE
In the words of Gus, husband to Claudia and father to 16-month-old Saskia.

■ While we actually missed most of the antenatal classes, I think I went to nearly every one of the midwife’s appointments. We were going through everything together and I was trying to support and help as much as I could. I didn’t really have any expectations. You hear so many different stories about labour.

We knew the epidural was going to probably be the best option. Claudia’s waters broke and she started going into labour in the house so we jumped in the car. The pain was clearly immense, almost unbearable. I have to say, once we got to the hospital, the epidural changed the whole dynamic in the room. I’m amazed that any woman would not want to have one.

I had certainly never seen the expressions of pain on Claudia’s face that she was showing that day, and it was quite distressing for me. I just wanted to do anything that I could to relieve it. Whatever options were available to us to reduce that pain, I was gunning for them - big time. A lot of people have funny views on pain relief and are essentially sticklers around it, but I say get the drugs in, and as much as you can.

It was amazing. I think most parents would agree that birth is a life-changing experience. It’s quite hard to describe, but firstly it was a relief to know that Claudia was okay, and of course, that our daughter Saskia was fie too. Also, the immediate love that innately comes over you seeing your child for the first time is pretty special.

You actually feel like a third wheel at times, but you are a huge support to the pending mother. Just be there. I’d say it’s important, certainly from the mother’s perspective, to have that support.

JUST LET IT HAPPEN
In the words of Rupert, husband to Jess and father to two- year-old Fergus and four-month-old Claudia.

■   My antenatal classes were calving cows. With Fergus (our first-born), I went to one meeting with the midwife and she explained what was going to happen if the birth went well. We also did some pregnancy yoga which gave me a couple of tips to use when Jess was contracting that would lessen the pain for her.

I remember thinking that Fergus’s birth was going to be a lot worse than it actually was. I guess I was a bit more desensitised as well because I’ve watched a lot of animals give birth, I knew the process. The other good thing was   that Jess’s labour and births were all by the book so it didn’t really get too out of control. When you start running into C-sections and all that kind of jazz, that could have changed things for me, so I was very lucky.

I sort of understood what my jobs were: to keep everything calm, sit there quietly, and do what I was told, basically. Through Ferg’s labour, Jess didn’t really want to touch me until she got right down to the nitty gritty at the end. But other than that, I sat there on an iPad for about two hours waiting for something to happen. And I got hungry, that was the other thing, really hungry.

If I was going to give some advice to first-time dads, I would probably say have a look at a few births on the internet, just to see what you’re getting yourself in for – but maybe don’t watch them with your wife. Also, take a bit of food because, with your first one, you’re probably going to be there a bloody long time. Second ones are usually a lot quicker. Just roll with it. There’s nothing you can do about it, just sit down and roll with the punches. Listen to what your wife and midwife are telling you. Everyone’s so scared when it comes to birthing, but you don’t need to be, it’s not that bad. It’s a natural process. Just let it happen, don’t force it.

JUST BE READY, FOR ANYTHING
In the words of Olly, husband to Catherine and father to two-year-old Max.
■   I went to all the antenatal classes, and the lactation consultant sessions, and tried to put together the hospital bag. Max was two weeks overdue. We eagerly got everything ready a month in advance and then sort of forgot about it.

We attempted to use hypnobirthing techniques. We’d been listening to recordings of a hypnobirthing sequence and I’d been practising light-touch massage - there was definitely a plan of some things that I would be helping with.

I’d heard that labour can take quite a long time but I wasn’t prepared for the amount of waiting. There were fairly long periods of nothing happening. We got a bit frustrated with the amount of time things were taking. We seemed to be burning through staff­ quite rapidly, and felt like we’d been forgotten for a bit, so we
had shared frustration.

Max’s arrival took about 27 hours from start to finish, and ended with an emergency C-section. We’d made a playlist and probably the best thing we’d prepared was a charged iPod with a portable speaker for music when we wanted it.

My role was very much just hand-holding, massage and trying to keep Cat calm until the point where they did an epidural. They tried to induce but Max wasn’t having any of that, and started freaking out. That’s when they decided to do an emergency C-section. They whipped us into an operating theatre and it was all over in 20 minutes.

The biggest relief was the moment when they said “let’s get him out”, because we’d been getting more and more stressed that nothing was happening. When they finally said they’d take it out of our hands and deal with it, it was like we could breathe again. Then he was out and perfect.

It was a whirlwind half hour going from absolutely nothing going on, to brief panic, to total elation and then calm in the recovery room with Cat sitting there eating an iceblock and Max breastfeeding. There was no one single emotion that left an independent mark - other than exhaustion.

Be prepared to go with the flow and get out of the way when necessary. You are equal parts essential and completely useless. Just be ready to do what is asked of you. There may be long periods of massaging until your thumbs drop off. Keep in mind that it’s all going to be worth it. CALL THE MIDWIFE
In the words of Jackie Snowden, midwife at The Baby Business, Canterbury.
■   I would have to say that most dads are not very well prepared. Unless they’re coming to antenatal appointments and there at the birth plan discussion, they don’t really know what they’re in for. For this reason I have prepared an information sheet for my clients with things that dads can do and expect.

We have some really awesome classes down here in Pegasus called The Birthing Room. They focus on normality and avoiding the cascade of intervention, as well as how to support women through labour and birth.
They teach a bit of acupressure and some back massage, helping with breathing, and other support methods to get dads involved.

I would say the hardest thing fathers struggle with is seeing their partners or wives in such a high level of pain. All they want is for us to take it away, and to give their partner the pain relief. So my focus is on trying to get people to look at the pain positively. Generally, you associate pain with something being wrong. But pain in labour is a good thing because it’s telling us that your body’s doing what it needs to do to deliver your baby. The trick is getting the dads to see it that way.

TAKE NOTE
We asked our readers to recall the most helpful things their partners did for them during labour. Providing back massages and cold flannels topped the list, while staying quiet and not fainting also featured repeatedly. Other notable gestures included:
👍  Fed me jelly beans
👍  Gave me sips of water
👍  Provided a hand to relentlessly squeeze
👍  Massaged my back for five hours
👍  Didn’t eat all the food in the hospital bag
👍  Got me McDonalds
👍  Made me laugh
👍  Held hot wheat packs to my back
👍  Drove me super quick to the hospital
👍  Called my mum